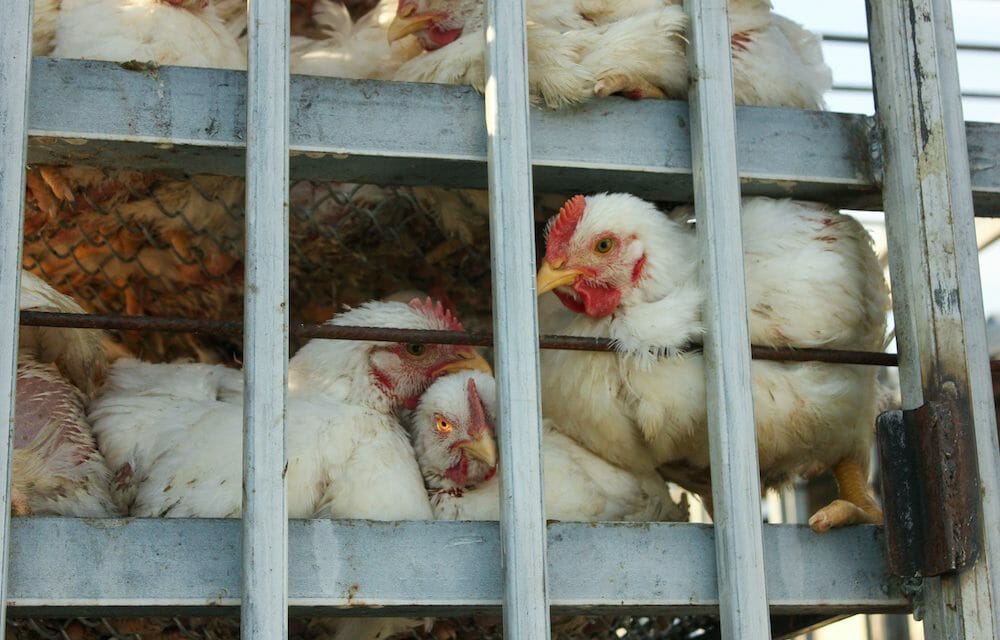 U.S. poultry slaughterhouses racked up more than a hundred citations from federal inspectors in 2021, including numerous instances of birds being boiled alive, live birds left among dead birds, and birds who arrived to poultry plants dead on arrival, according to a new report from The Humane League.

The report analyzed records from 300 U.S. poultry slaughterhouses between April and September 2021 that were released by the U.S. Department of Agriculture’s Food and Safety Inspection Service in January, following a lawsuit from the Animal Welfare Institute and the Farm Animal Sanctuary.

The records show that inspectors issued 181 citations for noncompliance and other issues to poultry plants. Topping the list of atrocities were 68 birds who were boiled alive, 50 instances of live birds found among dead birds, and 33 incidents of inspectors finding birds who arrived dead to the facilities.

These documented violations are in addition to the already horrific and massive cruelty  that is “the industry standard” at U.S. poultry plants, The Humane League said.

Most chickens raised for human consumption live in filthy, crowded sheds and are bred to grow so large and unnaturally fast that the birds can’t hold up the weight of their own bodies. Chickens are slaughtered while still babies, at only six weeks old, and most commonly via the live-shackling method — a cruel process in which live birds are hung upside down in metal shackles, dragged along a conveyor belt to an electrified stun bath and an automatic blade that slits their throats, and then dumped into scalding water to loosen their feathers. Not all birds are dead or unconscious by the time they reach the scalding tubs, with more than half a million birds boiled alive each year, according to The Humane League.

The report’s analysis also identified hazardous conditions for human workers at the plants, compounded by the USDA’s practice of allowing slaughterhouses to process 175 birds per minute.

More than 9.6 billion birds  — including chickens, turkeys and ducks — were killed in the U.S. for their meat in 2021 alone, according to The Humane League.

Those interested in speaking out about this cruelty can visit StateofSlaughter.com, scroll past the graph section and fill out their names and emails. The Humane League will then send an email to the big poultry companies to let these corporations know that consumers won’t stand for this horrific animal abuse.