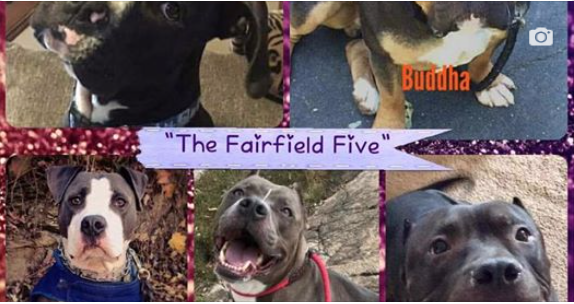 A new park bench, which will feature a commemorative plaque, at Whitewood Knoll Park in Fairfield, Conn., is memorializing the “Fairfield 5” — five innocent pit bulls starved to death back in 2018.

“The remains, for the most part, were just bones,” said Lt. Robert Kalamaras when the canines were discovered. “The conditions inside the home were pretty deplorable with dog feces throughout the entire house. The smell inside the place was pretty bad because of that and the state of decomposition of the animals’ bodies.”

Achilles, Brooklyn, Buddha, Gunner, and Meeko suffered a terrible fate, and it should never be forgotten.

“People felt a guttural reaction to that, thinking that those animals suffered like that, it’s heartbreaking,” said First Selectwoman Brenda Kupchick. “We’re going to dedicate the bench in honor of the five dogs that lost their lives in a tragic way and talk about animal welfare; talk about being protective of animals; and hope that this is a reminder that they matter — that those five dogs matter.”

The money for the memorial was raised by animal welfare group Desmond’s Army Animal Law Advocates, a group of volunteer citizens who work together to better the lives of animals and provide ‘a voice for the voiceless.’

“We had a huge outpouring of support from the community, really, from all over the country and world,” said the group’s president Zilla Cannamela.

The plaque will be unveiled at a special dedication ceremony at 12pm on Saturday August 1st.