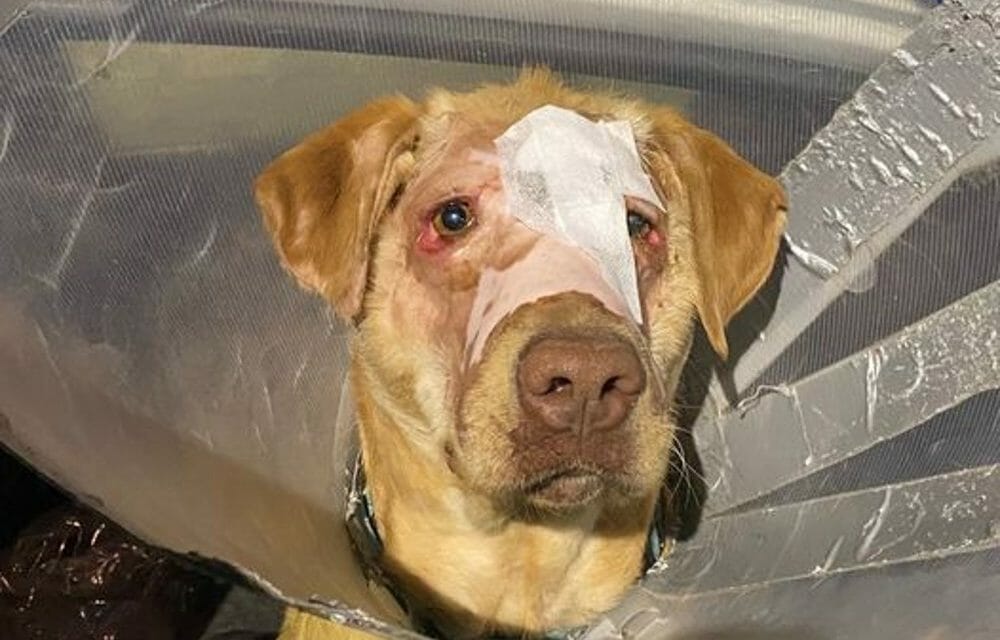 Buddy’s Law, signed by Gov. Tate Reeves in May, will require that youth who torture animals receive mandated psychological evaluation, counseling, and other mental health support.

We had previously reported in March that in a heart-breaking and nonsensical move, that SB 2261 died in committee. Since that time, the bill has been revived — and attached onto another bill, Senate Bill 2245 — which passed.

A fully recovered Buddy, who underwent more than 10 months of skin grafts at the College of Veterinary Medicine at Mississippi State University, attended the ceremony at the State Capitol in Jackson. He was accompanied by Dr. Katherine Swanson, the vet who initially treated him at the Mississippi University Vet School and later adopted him, according to Southern Living.

In Defense of Animals (IDA), a nonprofit that championed the legislation, applauded the turn in events.

“We are thrilled that after two years and a rollercoaster ride this session, Buddy’s Law will finally start protecting animals and youths,” said IDA’s Justice for Animals Campaign Director Doll Stanley. “The precious dog whose face was scorched by a minor did not suffer in vain. Violent juvenile offenders must receive treatment to prevent animals and humans suffering at their hands in future.”

Thankfully Buddy now has a loving forever home and has been able to keep his heart open, despite his traumatic ordeal.

We are greatly heartened by this reversal and applaud Gov. Reeves for realizing this life-saving bill needed to be passed, on behalf of all animals and youth, and for all the people who helped Buddy heal and ensured that he won’t ever be harmed again!

Following a nerve-wracking stall, a new Mississippi bill that could save the lives of both innocent animals and troubled youth has passed into committee.

SB 2261, known as “Buddy’s Law” and sponsored by Sen. Angela Burks Hill, would require youth who come into the juvenile court system for intentionally torturing domesticated dogs or cats to undergo psychological evaluation and also participate in counseling and treatment for a length of time prescribed by youth court.

The hope is that an early intervention could provide needed services and rehabilitation, and also prevent future acts of violence and prison time as the children become adults, Hill said.

“If we can get them the medical evaluation that they need and some type of treatment and counseling, hopefully, they would not progress on as a teenager and then later be charged as an adult,” Hill told WLBT.

The bill is named after Buddy, an innocent family dog who was found with his face nearly burned off and an electrical cord wrapped around his neck after he was attacked by his owner’s child, who admitted to intentionally harming the dog to Tate County Sheriff deputies in 2021.

Because of the child’s age, no criminal charges were pursued. Someone over the age of 13 who committed the same act could have been punished by up to three years in prison, according to the Tate County Sheriff’s Office.

The legislation was held up by deliberations but has since passed on to the Judiciary B committee, where In Defense of Animals (IDA), an animal welfare nonprofit, is among those pushing for passage.

“Statistically, violent criminals, repeat offenders, start out with animals because they’re the most vulnerable,” said Doll Stanley, IDA’s Justice for Animals campaign director.  “We must have something in our justice system that addresses the need for helping children, before the age of 13, when they could be prosecuted and incarcerated.”

Buddy’s injuries were so severe that he has spent the last 10 months recovering at Mississippi State University’s veterinary school.  In a celebratory Facebook post, the Tunica Humane Society reported he has recovered to the point where he can be fostered by Betsy Swanson – the doctor whose skill and passion helped him recover.

“It just seems right Dr. Swanson would be the one to open her heart and home to Buddy,” the humane society wrote in their post on Feb. 15. “Today, Buddy stepped back into life and a kinder, gentler world awaits him.”

Throughout the entire ordeal, they added that Buddy “never lost his joy for life.”

“Through all the pain and suffering he endured, he taught us to never give up and never give in,” the post continues. “We have celebrated every obstacle he has conquered along the way. His courage and determination to survive has inspired us all.”

If passed as written, the bill would become effective July 1, although Hill has told media she hopes to possibly have the changes made immediately upon passage.