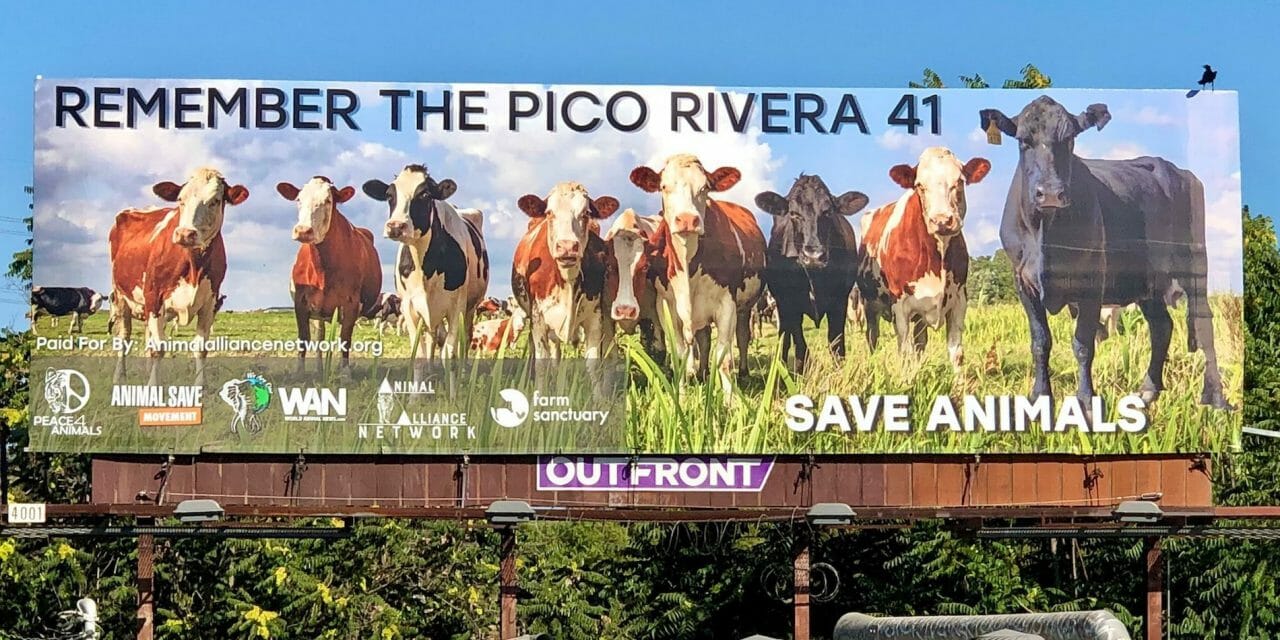 A powerful new billboard in Pico River, Calif., honors 41 cows who escaped a nearby slaughterhouse and led police on an hours’ long chase before getting caught.

All but two returned to face the meat cleaver at the slaughterhouse.

“[T]hey were running for their lives,” said one witness at the time. “Anybody would want to escape.”

Eight cows stare out from the billboard, along with messages to “Remember the Pico Rivera 41”  and “Save Animals”–  visible reminders of all the innocent animals raised and slaughtered in gruesome conditions for human consumption.

The billboard — the brainchild of the Animal Alliance Network (AAN), Peace4Animals, and other animal welfare and vegan organizations — is located just outside the Manning Beef Slaughterhouse, from which the daring cows escaped and were returned. The facility slaughters an estimated 1,500 to 2,000 cows each week, according to news reports.

AAN Co-founder Ellen Dent said the documented escape, and the cows’ sad fate, was a pivotal moment that could “inspire significant change.”

“The connection needs to be made that it is not ‘what’ people are eating, it is ‘who’ they are eating,” she said.

Katie Cleary, founder of Peace4Animals, said the billboard is designed to remind people that animals are sentient beings who should be treated with compassion and respect. The billboard also encourages people to adopt a plant-based lifestyle.

“With so many delicious plant-based food options now available, there is simply no justification for cows, or any animals, to be senselessly slaughtered for their meat,” she said.