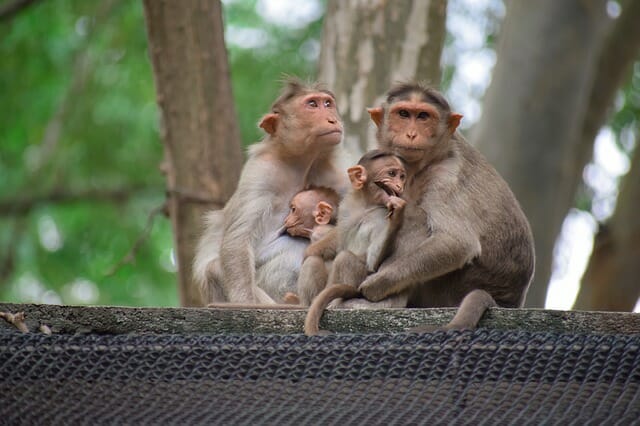 Off the coast of South Carolina lies an island uninhabited by humans whose shoreline is lined with “No Trespassing” signs. Those who have ventured close by boat report a spectacle of seeing hundreds of monkeys “swarming the beaches,” which have led locals to dub the land “Monkey Island.”

The island, which is owned by the South Carolina Department of Natural Resources and leased by Charles River Laboratories, is home to a U.S. Government breeding program for rhesus monkeys, many of whom are destined for invasive and painful medical experiments, according to a new exposé from nonprofit White Coat Waste (WCW).

Every year, around 500 of the island’s  monkeys are trapped and shipped to medical labs “where they’re subjected to batteries of extraordinarily painful experiments and infected with the most dangerous and deadly diseases known to man,” according to documents obtained as part of the WCW investigation.

Charles River Laboratories maintains the colony of monkeys for the National Institute of Allergy and Infectious Diseases (NIAID) — a division of the National Institutes of Health (NIH), a federal agency that conducts numerous experiments involving animal tests. NIAID has funded various “maximum pain” experiments on primates where pain relief is withheld, such as infecting monkeys with Ebola and other hemorrhagic viruses, exposing them to tuberculosis, and inducing sepsis, according to WCW.

When asked to comment on the experiments, NIAID told World Nation News that the monkeys are being used by NIAID “for research that helps develop vital means of preventing and treating diseases that affect public health.”

In one experiment alone, 12 monkeys who were injected with Crimean-Congo hemorrhagic fever developed fever, lethargy, and hemorrhages before they were killed, according to WCW.

The experiments are not only painful and often deadly — they’re also expensive. Maintaining the colony has cost taxpayers $13.5 million  since March 2018, of which $8.9 million came from NIAID, according to WCW.

“Primate experimentation is a cruel and notoriously unreliable way to develop drugs and treatments for humans,” Lopresti-Goodman said.

Scientists have echoed that sentiment for decades, with growing evidence that animal testing is cruel, unreliable, and dangerous due to insurmountable differences between human DNA and that of non-human primates and other animals. More than 90 percent of drugs that pass preclinical tests fail to proceed to human markets after being proven ineffective or unsafe, according to the Food and Drug Administration.

That colossal failure rate — which also allows dangerous drugs to be tested in clinical trials on people — is why a growing number of scientists are touting human biology-based alternatives to animal testing, arguing that innovative methods like organs-on-a-chip or 3D printing of tissue would mean developing safer, faster, and more reliable medical treatments for human diseases.

Even the NIH has noted that alternatives exist, including that “computer programs with advanced systems based on large chemical databases can predict a chemical’s toxicity, reducing the need for animal testing in some situations.”

Dr. Tiffani Milless — a pathologist board-certified in Dermatopathology, Anatomical Pathology, and Clinical Pathology, who is a medical advisor for WCW — said the NIH should “stop squandering tax dollars on wasteful and cruel primate testing that doctors like me cannot use to actually help people.”

“As a pathologist with expertise in how disease affects human patients, I can say with certainty that infecting nonhuman primates with painful and debilitating illnesses with the goal of curing humans is not just cruel, but it’s incredibly wasteful,” Milless said.

The new WCW exposé follows on the heels of a previous investigation that exposed experiments funded by the NIH in which dozens of beagle puppies were force-fed an experimental drug, poisoned, and killed, as part of research for a potential vaccine.

The new report, following the exposé of the beagle experiments, had Rep. Nancy Mace (R-SC) “deeply disturbed,” according to a letter she sent to Dr. Anthony Fauci on Nov. 30, demanding answers about the “Monkey Island” experiments by Dec. 20.

In her letter, Mace requests an explanation of NIAID’s involvement in operating and maintaining Morgan Island, the number of monkeys transported from the island to NIAID labs since Jan. 1, 2020,  a complete account of all experiments on Morgan Island’s monkeys, the amount of taxpayer dollars spent to support those experiments, and a description of NIAID’s efforts to phase out testing on dogs, cats, and primates.