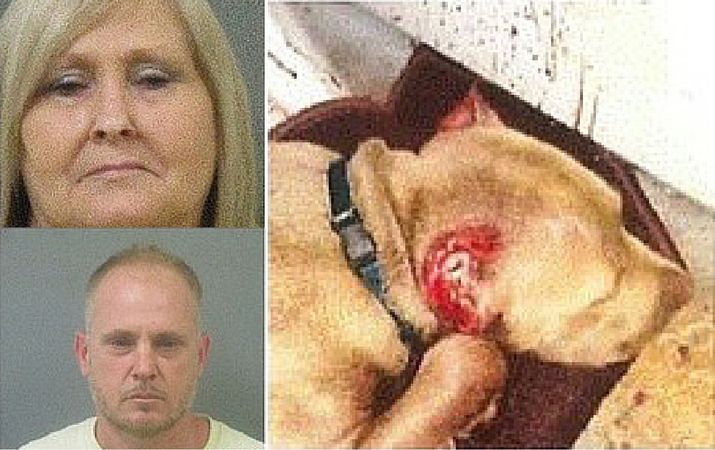 A mother and son in Georgetown, South Carolina were arrested Wednesday for allegedly cutting off a pit bull puppy’s ears with household scissors and stitching them up with fishing line.

The Georgetown Sheriff’s Department was alerted to the problem by concerned citizens who called in after seeing photos of the dog (named Brick) on Facebook. The post containing these images was reportedly shared thousands of times.

When officers showed up at Tyler’s residence, he denied having a dog, claiming he had simply seen the post on Facebook and clicked “Like.” He said he could not remember who had actually posted the images, but did reportedly admit to liking pit bulls with their ears cut. He claimed, however, that he would take the dog to a vet to have such a procedure done.

The Facebook post told a different story, stating that a vet had given him sedatives for the dog, so now he could do whatever he wanted.

The officers searched the property and did not find a dog, but Brick was eventually located and rescued by the Williamsburg County Environmental Services Department, and he is now in the hands of a veterinarian who is treating his wounds.

Thankfully, Brick will never be abused by this cruel mother and son again. But he is still permanently disfigured, and doubtlessly traumatized. No matter who performs the procedure, it is simply wrong a mutilate an animal to suit humans’ tastes.