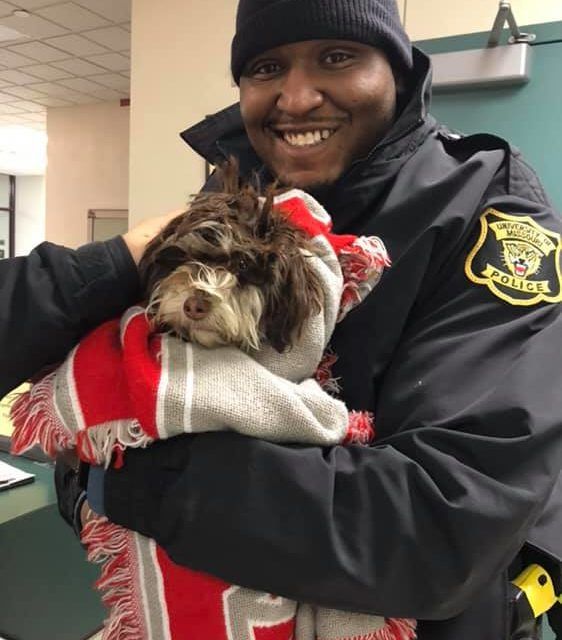 Thanks to some quick-thinking college students and dutiful police officers, a missing puppy has been reunited with her guardian after two long weeks — during which a historically cold polar vortex descended upon a large portion of the United States.

It’s one of every dog parent’s worst nightmares: their beloved canine escaping in the dead of winter. That fear became a reality for Missourian Katherine Matteson a few weeks ago, when her six-month-old puppy, Mia, fled from her backyard after being let outside to do her business. Mia, who has a tendency to run away, scaled a snow bank and hopped over a fence.

Matteson prepared as best she could to receive the worst possible news about Mia, given the recent life-threatening cold and heavy snow in the Midwest.

In an unexpected stroke of luck, however, the runaway dog was spotted outside Memorial Stadium by two Missouri University (“Mizzou”) students, Riley Girardier and Trevor Koelling. The men followed Mia into the stadium and unsuccessfully tried to lure her out of hiding with a trail of food. When their attempts failed, Girardier and Koelling summoned the police for help.

The pursuit finally ended when officers John Hayes and Susan Huang reported to the scene and cornered Mia near an ice machine.

Mia was taken to the vet and checked for a chip, but none was found. The police took her to the groomer and she spent the night at the home of Officer Hayes, where she enjoyed some much-needed snuggles.

On Thursday, Matteson and Mia were finally reunited after two long weeks.

This heartwarming story reminds us to closely monitor our pets in the cold weather – every year, frigid temperatures kill countless animals. When it comes to keeping your companion safe in the freezing cold, you can never be too careful!