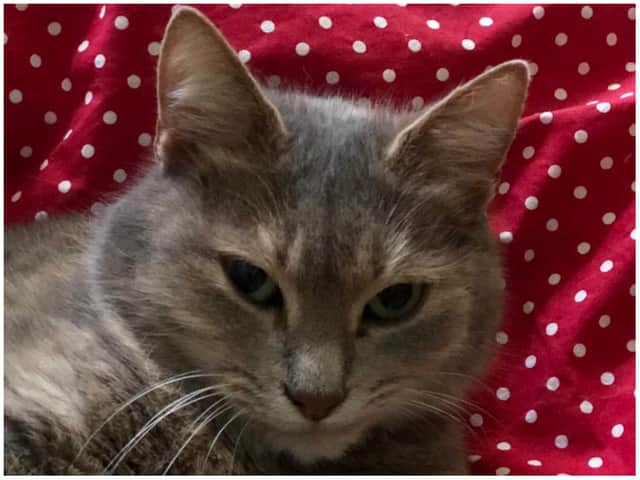 Cocci the cat (Submitted, as published by National World)

A beloved cat who went missing a year ago after her family moved across France recently reunited with her tearful guardians, who were astonished to find that the feline had covered nearly 280 miles in a seeming mission to get back “home.”

A passerby spotted a weatherworn cat under a car in Souilly, about six miles from where the De Amici family had lived in Ambly-sur-Meuse, and posted her photo to a missing companion animal site called Pet Alert.

Laëtitia De Amicis saw that post and reached out, believing the cat was her beloved, 10-year-old Cocci who had “taken advantage of an open door” and gone missing after the family moved to Normandy for work reasons.

After exchanging photos to prove guardianship, Laëtitia asked her father, Bernard, who knew Cocci well, to scope out the situation. After some persuasion, since he didn’t believe the cat could have traveled that far, Bernard went. That same day, Laëtitia and her daughter jumped on a video call with Bernard — and saw her dad cuddling her cat.

“When my dad called me, I was with my daughter,” she told news. “She looked at her and recognized her and burst into tears. I was also crying.”

The senior cat weighed only about two pounds, and also had fleas, worms and an infection, according to news reports. After three weeks of care with a veterinarian, Cocci made her way back to Normandy with the De Amicis, who reported she is adapting “well” but still adjusting.

“She has become wilder,” Laëtitia told Italy24. “Once she let herself be pampered, moved. Now, however, we must treat her with more calm and attention. Only small caresses are allowed. Otherwise, she gets nervous.”

We are overjoyed that Cocci received the care she needed and has reunited with her loving guardians, who never stopped looking for her and found her in the nick of time. We’re grateful to the caring passerby, who took the time to not only stop and check on Cocci but also to post about her story and help her find her home, and to the De Amicis for accommodating Cocci’s new behavior after her ordeal.

This uplifting story is a powerful reminder of the importance of keeping companion cats inside and ensuring that they have identification — including a collar with tags and a quick release safety latch, but also a microchip – in the event they wander off.