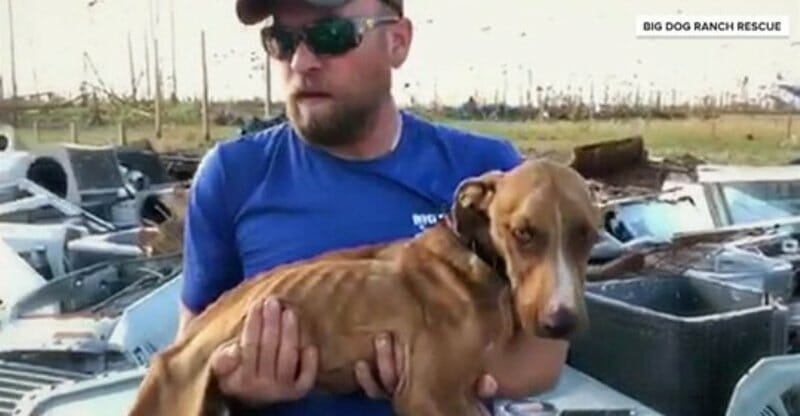 In a heartening story of survival against the odds, a dog who was trapped for over three weeks in debris left by the destructive force of Hurricane Dorian in the Bahamas has been found alive by an animal rescue organization.

Named Miracle by his rescuers, the emaciated, weak and frightened dog was discovered wedged under an air conditioning unit and building debris in Marsh Harbour on the Abaco Islands by members of Big Dog Ranch Rescue.

The organization was alerted to Miracle’s desperate situation on Friday, October 4 and immediately employed drones and recovery teams to locate and save him. After detecting a small area of heat among the rubble, the team managed to uncover the dog and rush him back to their HQ, where Miracle received lifesaving treatment and food.

On its Facebook page the rescue organization gave an update on Miracle’s condition: “We are taking care of our Miracle baby at Big Dog Ranch Rescue. He has a long road to recovery, but for now, he is comfortable, and he is eating and gaining a bit of strength! He is anemic, heartworm-positive, very weak, and he cannot walk on his own… The poor baby fought for his life over there — surviving on rain water from the storm for weeks!”

Big Dog Ranch Rescue has so far saved 138 dogs from the Bahamas in the aftermath of Hurricane Dorian, some of whom had become separated from their carers as they evacuated the area. Happily, many of these canine survivors have been reunited with their worried owners.