MELTING ARCTIC ICE COULD WIPE OUT THE BELOVED BELUGA WHALE 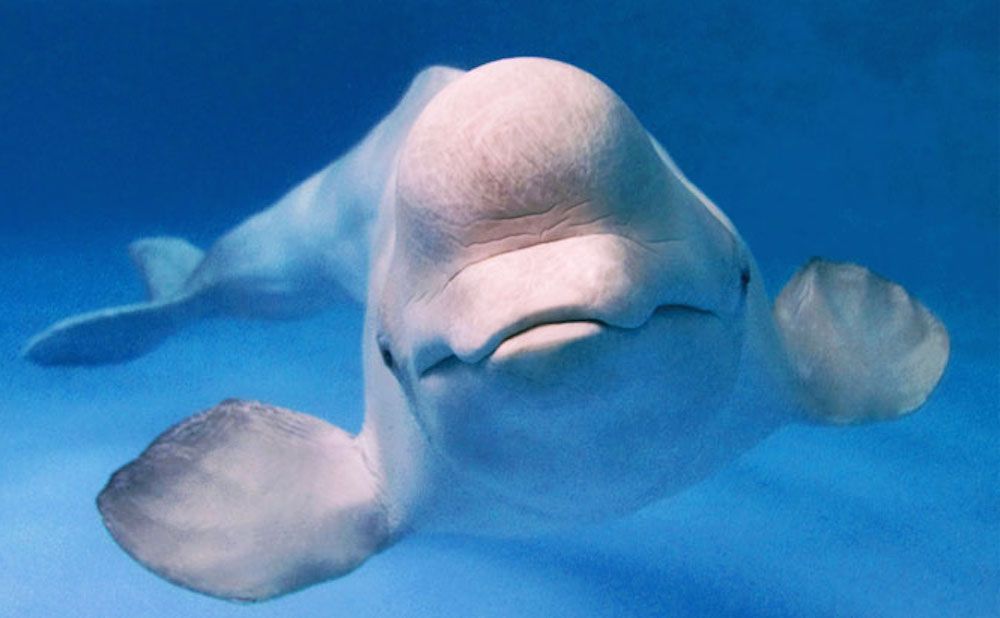 The next victim of climate change could be the beluga whale. The Arctic, the habitat to which they have adapted through years of evolution, is increasingly at risk. What was once their refuge is eroding under the fist of climate change at a record pace.

It is indisputable that Arctic sea ice shrinking: “On March 7, 2017, Arctic sea ice likely reached its maximum extent for the year, at 14.42 million square kilometers (5.57 million square miles), the lowest in the 38-year satellite record,” according to the National Snow & Ice Data Center.

Without sea ice there can be no sea algae. The fish and crustaceans that eat the sea ice algae are then eaten by the belugas. If there isn’t any sea ice algae there aren’t any fish for the belugas to eat.

Beluga whales are magnificent creatures. Unharmed, they can live for over 60 years. Mostly found in the Arctic, they are known for their white skin, their pronounced melon-shaped heads, and a face that looks as if they’re always smiling. But perhaps what is most endearing about them is their ability to “sing.” These highly communicative mammals produce a range of sound, often likened to birds chirping, that gave rise to their nickname “canary of the sea.”

Historically, hunting was the main threat to belugas as they are philopatric creatures, returning to the same areas seasonally, making them vulnerable to both human beings and predators. But climate change has now threatened their population, far outweighing those initial threats. Rising CO2 emissions from human activity, including oil and gas production, are melting and weakening huge swaths of arctic ice that is critical for the survival of belugas. For perspective, one gallon of burned gasoline releases about 19 pounds of CO2 into the atmosphere.

Seismic surveys and drilling for oil development disrupt the beluga’s migratory patterns, habitat, and food sources. Pollution and habitat destruction caused by the drilling, leaks, and commercial fishing have further depleted their resources and subjected them to chemical pathogens. They are simultaneously ingesting and swimming in this pollution.

We’re witnessing the multiyear ice melt and get thinner. Prior to human induced climate change newer, weaker ice would melt in the summer but the multiyear ice would buttress the overall effect, keeping huge masses in tact for animal survival. But now the ice is weaker, breaking, and melting.

Belugas, had the advantage over some of their predators in the Arctic because of their skill in exploiting the ice. Orcas, for example, couldn’t survive the icy water but now can easily navigate the warmer temperatures and make a meal of belugas.

The same holds true for the effects of climate change on polar bears and seals.

The polar bear, camouflaged by its white fur, like the beluga, spends most of its time at sea or on ice, hunting and giving birth. Increasingly, melting ice has the bears swimming for long stretches of time to seek food. They starve and weight loss leaves them incapable of reproducing and caring for their young. Seals spend the first 6 weeks of their life on ice nursing and also use the edge of the ice to catch food. As the ice melts they’re forced to enter the water at a younger age. Too weak to survive on their own this often results in them ending up stranded on a beach to die.

Polar bears were finally listed as threatened under the Endangered Species Act in 2008. Yet, the U.S. Interior Secretary refuted the correlation between climate change and the threat to the bears. And the endangered species law wasn’t used to limit the greenhouse gas emissions. This is a common habit of governments: acknowledging that a species is at risk of extinction and yet disavowing the science behind the means to stop it.

Earlier this week, the Trump administration proposed rules repealing safeguards for the environment. Pervasive throughout this order is the blatant disregard of climate change and the dire situation of global warming. At the very minimum a commitment to the Paris Agreement, put in place to curb CO2 emissions and the greenhouse gas effects, should be fulfilled, but with the past three months it’s apparent that even a small act towards curbing climate change will be ignored.

In an act that defies humanity, the Canadian government opened its seal hunt for certain fisheries two weeks early. It is customary to halt hunting from March to mid-April to allow mothers to give birth and nurse their pups. Hunting is usually suspended until mid-April to allow mother seals the chance to give birth and nurse. The first two weeks of a baby seal’s life are its most vulnerable. It cannot survive without its mother. Arguing the need for an adult hunt at a time when seals had been protected in the past is disgraceful; It’s also highly unlikely that the pups are not the target as 99 percent of the harp seals killed in recent years have been pups valued for their soft pelts.

This not only affects the seal population but as with the polar bear and beluga, the entire ecosystem of the Arctic. It’s hard to believe that when they can be killed outright for their pelts that their lives will be held in high regard and protected as collateral damage from global warming.

But the marine ecosystem is indicative of our larger ecosystem and small victories can prove otherwise.

As the food supply dwindles and habitats are threatened, reproduction is increasingly difficult. These animals are forced to relocate and change their migratory patterns. They are subject to disease and chemical pathogens from pollution. Their survival, the Arctic’s survival, and ultimately the global ecosystem’s survival depends on addressing climate change.