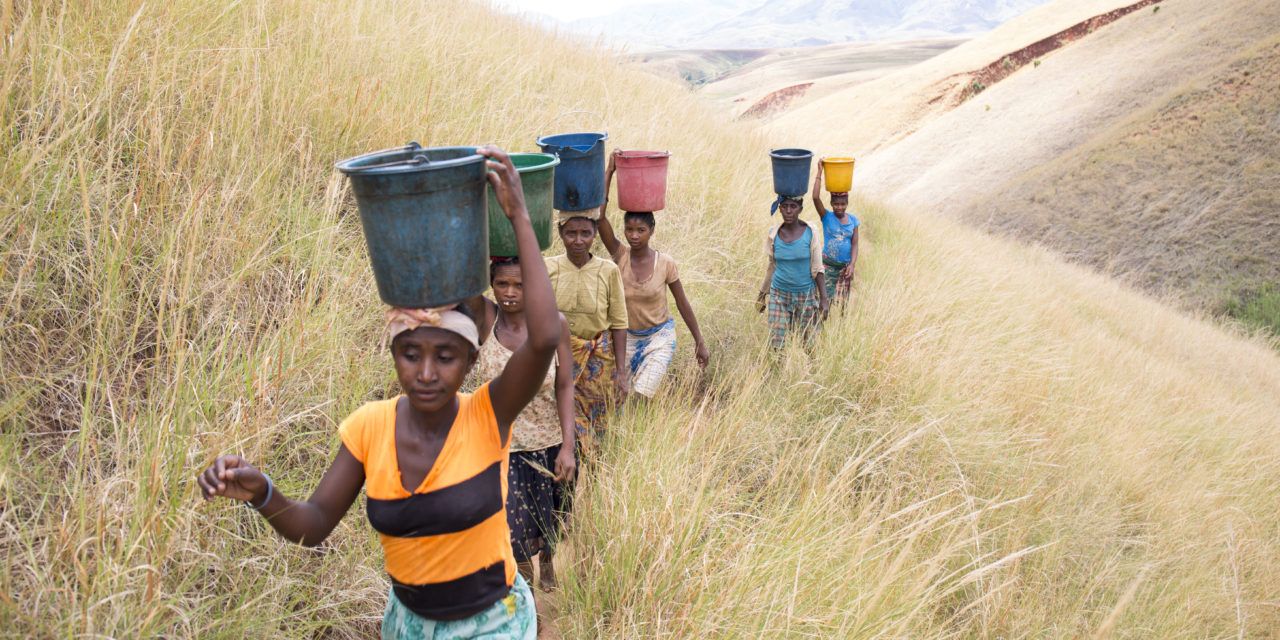 To mark World Water Day on March 22, WaterAid released its State of the World’s Water report, warning that because of climate change, the world’s poorest communities will face an even tougher struggle for access to clean water. Countries ranking highest in population without access to clean water also rank high in vulnerability to climate change and low in their ability to adapt to it.

“Extreme weather events resulting from climate change can mean more storm surges, flooding, droughts and contaminated water sources. They can wipe out fragile infrastructure, dry up rivers, ponds and springs, and contribute to the spread of waterborne diseases making an already difficult situation worse for the 663 million people in the world without access to clean water. When climate disasters strike rural populations, the challenges are even greater,” CEO of WaterAid Canada, Nicole Hurtubise, told Lady Freethinker.

Since 2010, the right to clean water has been recognized as a basic human right. It is the primary step in the struggle to overcome poverty and gain access to fundamental healthcare, education, and employment. Even so, the World Health Organization (WHO) warns that by 2025, half of the world’s population will be living in water-stressed areas. These are areas where the demand for clean water outweighs the supply.

Of the 663 million people without access to water, most are in rural communities, with women and children being disproportionately affected. A report released by the United Nations Children’s Fund (UNICEF) notes that one in four—or 600 million—children will be living without basic access to water by 2040.

With a 31.7 percent global gender gap, water is an essential component of achieving gender parity. For women, water scarcity can be a nightmare. Due to a lack of sanitation systems, many women don’t have toilets or privacy. They are often forced to go outside at night to relieve themselves, frequently becoming victims of sexual assault. Many women give birth at facilities without clean water, risking their life and their baby’s life. Globally, 15 percent of people contract infections at hospitals, and in poorer communities, this is even higher.

Worldwide, women spend 200 million hours a day collecting water. In many cultures, domestic work remains a woman’s responsibility, and girls must often spend their entire day gathering water. This can translate into missing out on an education or a paid job.  If girls do go to school, many drop out when they start to menstruate due to lack of facilities with water. Sadly, living without dignity is a reality many women face on a daily basis.

“Globally averaged sea surface temperatures were also the warmest on record, global sea levels continued to rise, and Arctic sea-ice extent was well below average for most of the year,” said WMO Secretary-General Petteri Taalas.

Scientific consensus, including studies by National Aeronautics and Space Administration (NASA) and the UN Intergovernmental Panel on Climate Change (IPCC), is that human influence on the climate is the biggest cause of global warming.

The extreme weather conditions of droughts, flooding, and fluctuating high and low temperatures can be largely attributed to CO2 emissions, the consumption of meat and dairy, industrialization and urbanization leading to deforestation, and an increase in population leading to more demand and exploitation of the environment. What simply looks like inconsistent weather to some climate change deniers is actually a very consistent rise of sea level, ocean temperatures, and carbon dioxide (CO2) emissions.

Shockingly, 946 million people still practice open defecation in the same water that is then collected for consumption. Water is also contaminated and polluted. Flooding magnifies the spreading of this dirty water. And without irrigation, stagnant water causes disease. Water-borne cholera, blinding trachoma, mosquito-borne malaria and dengue are expected to become more common and malnutrition more prevalent as humidity, rainfall, and warmer temperatures increase.

For those whose livelihood depends on farming, being landlocked in a drought produces devastating results. Without irrigation farmers and their families are left without a source of survival.

To fight this we need an international effort for infrastructure overhaul; improved storage systems to take advantage of rainfall and floods, sanitation systems to ensure the water can be cleaned, and toilets. Reducing use and reusing water can go a long way to increasing safe water access. Governments need to commit to climate change goals and sustainable development and make investment in clean water a priority.

“Governments around the world must acknowledge the importance of water, sanitation, and hygiene in building climate resistance,” said Hurtubise.

Climate finance needs to actually reach the communities who need it most. Businesses that enter communities need to establish a partnership with the people living there. They need to make it their goal to assist in establishing safe water sources, not just exploiting the economy and land.

For a future with clean, accessible water, it is imperative to address climate change. For women and children, especially girls, clean water is a matter of life and death.