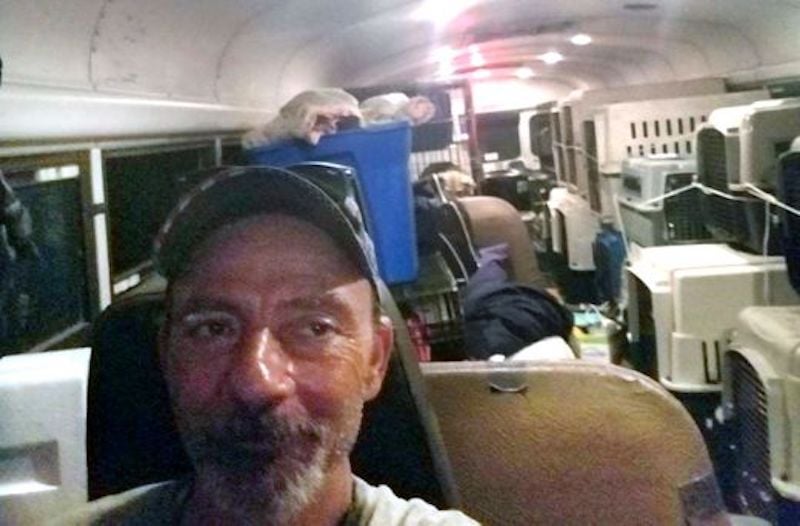 If a Congressional Medal of Honor could be bestowed for saving animals during this time, then Mr. Tony Alsup most certainly deserves it. It has been reported that this truck driver from Greenback, Tennessee raced to South Carolina before Florence hit the coastline to rescue eleven cats and fifty-three dogs.

This gentleman sped through the four South Carolina towns of Orangeburg, Georgetown, Dillon, and North Myrtle Beach, and packed these animals in an old school bus that he bought. But it wasn’t the usual appealing cats and dogs that he embraced. No, it was the hard-to-adopt outcasts that captured his heart.

He said, “It’s so easy for people to adopt the small pets and the cuties and the cuddly. We take on the ones that deserve a chance even though they are big and a little ugly. But I love big dogs, and we find places for them.”

One may imagine the barking and meowing that could outdo any yelling kids after a long day at a school that accompanied him on the long journey to a shelter in Foley, Alabama.

This Odyssey of love was not Mr. Alsup’s first major pet rescue. To his credit he also saved many other pets and hauled supplies in the wake of the natural disasters that impacted Texas, Florida, and even Puerto Rico. We hope that his humanitarian exertions will be made known to millions of people in our country and across the globe.

And we further hope that his selfless example will build the foundation of something much bigger to ameliorate animal suffering. It would be wonderful to see a “National Red Paw” organization with many chapters or affiliates that could quickly respond in a concerted manner. Or, at the least, a closely-knit network of animal rescue groups that could be mustered in times of trouble.