Love Animals and Want to Help Them? Here’s How to Get Your Voice Heard

Home » Animals » Love Animals and Want to Help Them? Here’s How to Get Your Voice HeardBy Lex Talamo 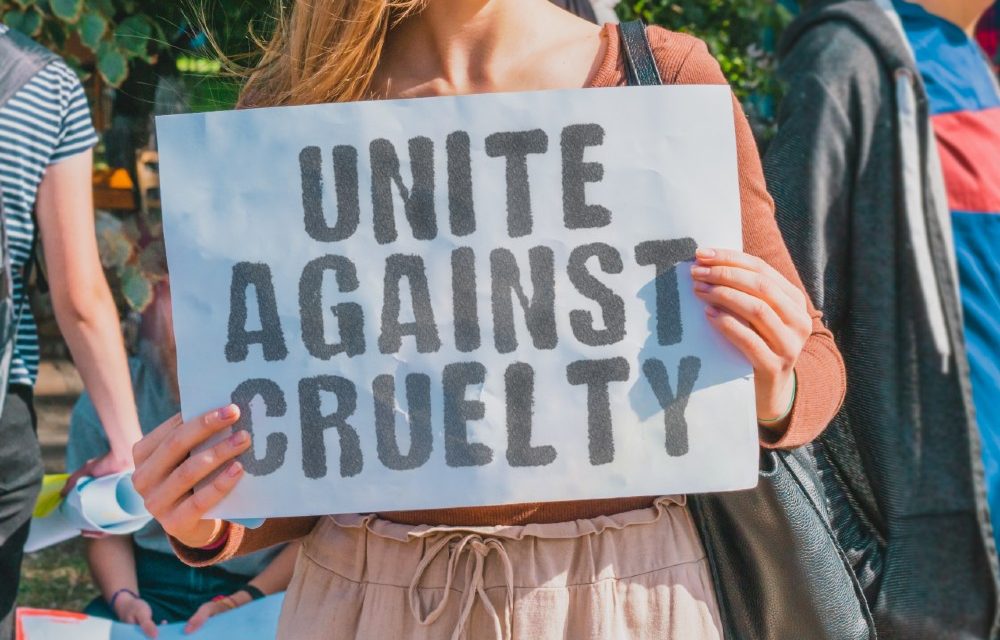 What triggered you to go from being a person who loves animals to an activist advocating for better conditions for them is likely highly personal.

Maybe you felt destroyed after watching a documentary like Dominion, in which investigators used drones and hidden cameras to expose atrocious conditions for animals at factory farms, and you started seeking ways you could reduce suffering or become part of the solution.

Maybe you witnessed an act of animal cruelty in your city, tried to get help from authorities, were told that “nothing” could be done, and chose not to take that answer at face value.

Maybe you or a loved one became ill – or even hospitalized — after eating a contaminated or undercooked product made from animals and you shifted your diet to plant-based sources and reaped the benefits to your health and energy levels.

Whatever the reason or origin, having your eyes opened to the massive suffering of animals in our world has probably led to conversations — and ones that aren’t always comfortable.

While speaking up for animals can make activists feel joy, hope, and purpose, trying to inspire actions in others — and not immediately seeing the desired impact — also can lead to feelings of burnout, despair, anger, and frustration.

That was definitely the case for many vegans who shared their stories about trying to effectively create compassionate change for animals with Melanie Joy, a renowned psychologist and co-founder of the Center for Effective Vegan Advocacy (CEVA).

In her seminal book Why We Love Dogs, Eat Pigs, and Wear Cows, Joy noted that a change in lifestyle — and a call to activism — shouldn’t result in the breakdown of relationships and communications, especially with loved ones.

“I felt personally saddened by these stories, as well as by the irony that we live in a world where choosing to practice integrity so often comes at the price of losing people we love,” Joy wrote. “I came to realize that relationship and communication breakdown was taking a tremendous toll on vegans, and, therefore, on the vegan movement as a whole.”

Whether you’re already vegan or a passionate champion for animals in other ways, here are some tips from experts about how to speak effectively about the animal protection issues you care about most.

For Genuine Change, Start With a Genuine Conversation

Faunalytics, a nonprofit focused on research to empower animal advocates, helpfully defined effective advocacy as “communicating in a way that opens people’s hearts and minds, rather than causing them to become defensive.”

“The goal of effective advocacy isn’t to be right, but rather to create a mutual connection with your audience,” the organization said. “Instead of sticking to your talking points, be willing to engage in genuine conversation.”

To offset a defensive reaction, activists should first work to find common ground or connection with their audience and also should avoid “shaming” people who aren’t yet making the most compassionate choices they could be, CEVA said.

Joy defined shame as a “feeling of being ‘less-than,’ of being less worthy than others of occupying space on this planet and of being treated with respect.”  She added that making people feel shame tends to backfire.

Rather than opening up and listening, people who feel shamed or attacked most often will shut down and avoid. Creating a space where people can talk about the issues can allow activists to plant seeds that will grow with additional exposure, CEVA said.

Careful listening can also reveal the root causes of a person’s resistance to change. A person might not be vegan yet because they live in a food desert where nutritious options aren’t available, because they feel overwhelmed by the idea of learning how to cook for themselves, or because they are misinformed about how healthy and delicious vegan options can be, CEVA said.

Taking the person to a vegan restaurant, teaching them how to cook vegan foods (or signing up for a vegan cooking class), or showing them where to buy plant-based meals or ingredients might be the most effective first step if any of those root causes are the case.

“By showing people that they can change their food choices without feeling deprived, you increase the chances that they’ll be open to changing their attitudes,” said CEVA Co-Founder Tobias Leenaert.

Faunalytics also noted that knowing what your audience cares about — if they care more about animal welfare, human health, or the environmental impacts of animal agriculture, for example — and addressing those specific concerns could also be key to being heard.

Although the welfare issues impacting millions of animals today are understandably emotionally-laden, experts also encouraged activists not to argue.

“We don’t need to win an argument, prove someone wrong no matter what or make someone go vegan on the spot,” wrote Marika Netzel, vegan chef and co-founder of Berlin-based Plant Base. “We want our listener to consider vegans to be kind… and therefore to pay attention to what we say and stand for.”

Frequent frustrations and challenges that vegans have expressed to CEVA include conversations that end with people saying that animals just “taste good,” that  they could “never” go vegan, or they “aren’t ready.”

CEVA encourages activists not to adopt an “us vs. them” mentality but rather to see each person as a potential ally to the cause.

Targeting people’s behaviors, including highlighting the compassion that people already have, and encouraging small changes to better align people’s choices with their intrinsically held values can lead to more receptivity and — eventually — bigger changes.

Getting people to choose more plant-based foods or to “be as vegan as possible,” such as participating in Meatless Mondays or choosing a vegan salad option rather than a salad with animal products during lunch, still saves animals, CEVA noted.

“You might be reluctant to encourage someone to be as vegan as possible, rather than asking for ‘total’ veganism,” CEVA acknowledged. “But if a person believes they have to choose between total veganism or total carnism, and they’re not ready for total veganism, they’re unlikely to change their food choices.”

“If, on the other hand, they know they can just be as vegan as possible, they can end up sparing countless animals’ lives,” the organization continued.

While some activists also may fear leaving encounters without offloading all the reasons they can think of to change people’s behavior, CEVA said that research shows that people can only handle so much information at any given time.

The “foot in the door” approach — or getting people open to even considering a new idea — also means that additional exposure at a later date, including from a different person or a different source, could result in lifestyle changes, Joy said.

Share Your Own Story — And Find What Works For You

People’s personal experiences about what led to their activism often can be more compelling than listing distressing facts about animal mistreatment, climate change, or human health problems, experts said.

Keeping stories short, simple, and personal is particularly effective, as many people tune out long-winded speeches, according to CEVA.

It’s also important to find ways to advocate for animals that align with your strengths, your skills, and efforts that you enjoy. VeganActivism.org is a fantastic resource for people looking to be the change for animals — regardless of your experience levels or other time commitments.

Some tips from the site for time-strapped activists include leaving positive online reviews for vegan restaurants, wearing conversation-starting clothing or buttons on your backpack about the issues you care about, or even changing your WiFi name to a message that other online users will see when they go to find their network (the site’s example is WATCHDOMINION.com)

Otherwise, current featured opportunities include everything from finding an activist mentor to protesting and taking direct action for animals or setting up a booth about animal welfare issues during community events.

There are also groups looking to connect people with graphic design, coding, social media, or writing skills to causes and organizations that champion animal rights and welfare issues.

Part of finding what works for you also involves recognizing, honoring, and calmly communicating your needs and recognizing your limits. Frustration and feeling exhausted are symptoms of burnout, CEVA said.

Burnout is also a barrier to effective activism. Netzel, the vegan chef who emphasized kindness toward others, also advocates extending that kindness to yourself.

“We also need to be kind to ourselves — not to mull over a not-so-greatly effective conversation, not to feel guilty for not knowing the matter inside and out, not being able to make your friends listen,” she wrote.

Above All — Don’t Lose Heart

Thought leader Charles Eisenstein, in his book The More Beautiful World Our Hearts Know Is Possible, encourages people not to be discouraged in their chosen work or to give into feelings of despair that their best efforts aren’t “enough.”

“So many people squelch the expression of their gifts by thinking that they must do something big with them,” Eisenstein wrote. “One’s own actions are not enough — one must write a book that reaches millions. How quickly this turns into a competition over whose ideas get heard. How it invalidates the small, beautiful strivings of the bulk of humanity; invalidates, paradoxically, the very things that we must start doing en masse to sustain a livable planet.”

He continues, “I am advocating a kind of confidence in the significance of all that we do, even when our vision cannot penetrate the mysterious, meandering paths through which our actions arrive in the larger world.”

“Trust me, there are no experts,” she wrote. “It’s all about trying and learning to do better and better every time. Stay positive and remember that everything you do matters.”

Communication Hacks: The Center for Effective Vegan Advocacy has a fantastic online resource about common challenges vegan advocates face and how to talk through them effectively here.

Online Advocacy Course: CEVA also offers a more in-depth, sliding-scale course exploring how to advocate for animals. If interested, you can enroll here.

Network: Find a mentor, a cause, and a community at VeganActivism.org.

READ! There are so many stellar books out there about making impactful change. A few of the good ones:

• Strategic Action for Animals: A Handbook on Strategic Movement Building, Organizing, and Activism for Animal Liberation by Melanie Joy
• Earthling Ed has a free e-book about vegan advocacy you can download here.
• Change of Heart: What Psychology Can Teach Us About Spreading Social Change by Nick Cooney
• Motivational Methods for Vegan Advocacy: A Clinical Psychology Perspective by Casey Taft
• Striking at the Roots: A Practical Guide to Animal Activism by Mark Hawthorne

Were you able to put any of the above tips into effective use in your activism? We’d love to hear more about your advocacy and your approach! Please email [email protected] with ‘Effective Activism’ in the subject line if you’d like to share with us and hopefully inspire other animal advocates!