LFT Sponsors Bus Ad in S. Korea with Message that Dogs are Family, Not Food

Lady Freethinker has funded a large bus ad in Jeonju, South Korea, highlighting the cruelty of the country’s dog meat trade and urging people to spare the animals’ lives. The ads will run for an entire year, featuring heart-wrenching images of captive dogs with text that translates to, “Dogs are not food but our family. Let’s save them together. I am not a piece of meat!” 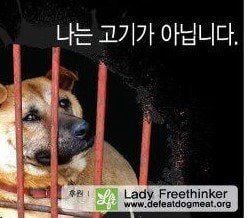 This initiative is organized by Nami Kim of Save Korean Dogs, a nonprofit dedicated to stopping this horrifically cruel industry. They are raising further funds to fight the dog meat trade and care for dogs rescued from meat farms.

These ads are especially relevant right now, with South Korea due to start its Bok Nal dog-eating days on July 17.

Bok Nal takes place annually during July and August, when locals will consume “bosintang” – dog meat soup – on the three supposed “hottest” days of the year. Many people mistakenly believe that eating dog meat during this time helps to cool the blood and improve stamina.

Up to 80% of dog meat produced in  Korea is eaten during Bok Nal – an estimated one million dogs will die during this period.

Although the popularity of eating dog meat in the nation is rapidly declining, particularly among the younger generation, Bok Nal is still widely celebrated.

However, times may be about to change for this industry in S. Korea, with important legislation moving through the National Assembly that could spell an end to the country’s dog meat trade altogether. You can help by signing two official government petitions — please see instructions here: