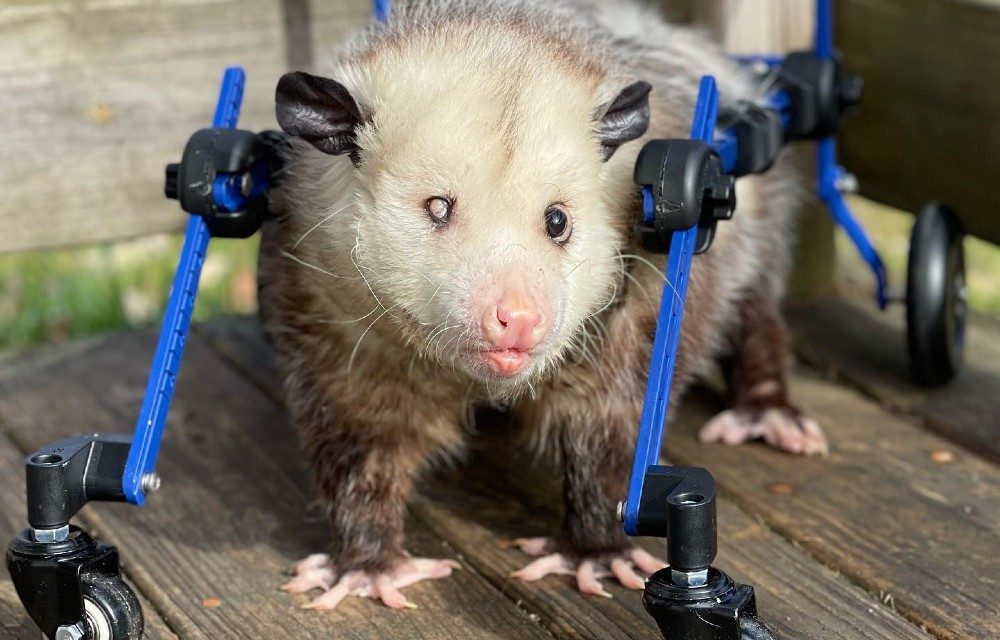 A Virginia opossum named Kewpie, who was rescued by a certified wildlife rehabilitator and struggled to walk, has reclaimed his independence with a custom-made wheelchair that now helps him zoom around and go on adventures.

Wildlife Rehabber Tonya Poindexter, the founder of the Wilderness Trail Wildlife Center in London, Ky., found Kewpie as a baby. The tiny animal likely had been attacked by a cat, was missing an eye, and also was anemic, Poindexter told People.

With professional care, Kewpie recovered. But then, around four months ago, he got an ear infection. The condition cleared, but Kewpie was acting differently; he seemed to be struggling to walk.

X-rays showed osteoporosis and scoliosis, which came along with a diagnosis of arthritis. Even though Kewpie is approaching “senior” status for an opossum around age two, Poindexter wanted him to continue to have optimal quality of life.

She reached out to New Hampshire-based animal mobility specialist Walkin’ Pets, who designed their first-ever wheelchair for opossum.

“Now with the wheels, he’s got some dignity again,” Poindexter said.

The contraption took some getting used to, but the intelligent Kewpie quickly realized the benefit of the wheels, she added.

“He likes to go on his own adventures,” the Center posted on Facebook in mid-February. “He still has a lot to figure out about his new transportation, but he seems to already be getting the hang of it and knows that he can get to places much faster and without as much effort.”

Now nicknamed “Mr. Independent,” Kewpie can go to the bathroom easier, stand up, and also is rebuilding strength in his legs because of the device, Yahoo! News reported.

His journey has inspired a social media following and donations for his care and medications, and he’s doing great, Poindexter added.

The video shows him joyfully exploring and walking around – without his wheelchair.

Lady Freethinker is heartened by the compassionate action taken on behalf of this precious opossum, whose release to the wild wasn’t possible because of his numerous medical conditions.

We’d also like to remind our readers that opossums are wild animals and should never be kept as pets, approached in the wild, or handled or cared for by any one other than certified wildlife rehabilitators.

If you find injured or orphaned wildlife — especially since spring is “baby” season —  please first check in with a wildlife center near you BEFORE attempting to help or remove the animal. Please be aware that housing and caring for wild animals of any species requires permits and certifications in most states, and that certified wildlife rehabilitators are an injured or orphaned animal’s best chance at survival.