Home » News » Julie Barton on Her Book ‘Dog Medicine’ – And How Animals Can Save Our LivesBy Lady Freethinker | June 15, 2020 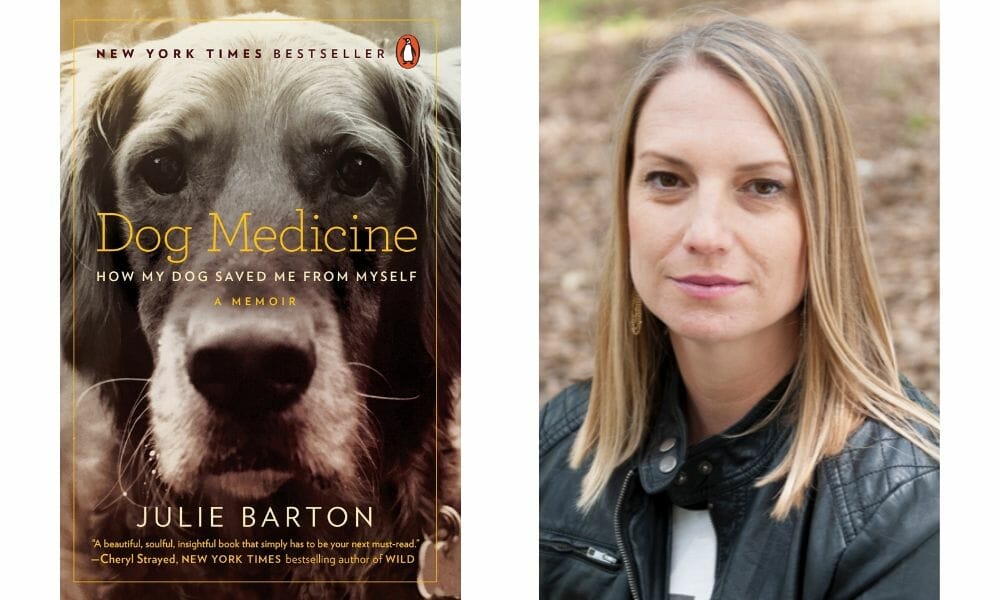 An inspiring tale about how a rescued Golden Retriever named Bunker saved her from a harrowing battle with depression, Julie Barton’s Dog Medicine speaks to how small acts of care and compassion can transform our lives. Now a New York Times bestseller, the debut memoir captures suicidal hopelessness with rare, brutal honesty and illustrates the power of non-human love with uplifting sincerity.

With the coronavirus pandemic forcing us to live in a more disconnected and isolated way than in years past, Barton’s genuine and encouraging words ring truer now than ever.

Lady Freethinker founder Nina Jackel sat down to discuss Julie’s inspiration for writing Dog Medicine, how Bunker changed her life, and how animals can help us cope with the most desperate circumstances.

Nina: Thank you so much for talking to us today. To get started, can you just share a bit more about your book — Dog Medicine — and why you decided to write it?

Julie: Dog Medicine is the story of my 22nd year of life. I had just graduated from college and moved to Manhattan, and subsequently suffered from a really severe bout of depression. It was 1996, and I didn’t quite know what depression felt like. I just thought there was something very wrong with me. So, I went home to Ohio, where I grew up on three wooded acres.

When I was a little girl, I really found solace in nature and the family dog. When things in my house got scary, which they sometimes did, I would take the dog to my room, and I knew the dog liked me. I wasn’t sure anybody else did, but I knew that my dog cared for me.

So when I was 22 years old and severely depressed, the only thing that I thought might help was getting a dog. My mom and I looked around and found this farm nearby that had a litter. This dog walked up to me and got down right at my feet, and he looked at me as if he was saying, “I’ve been waiting for you, let’s go. Come on.”

I was really nervous at first about being unemployed, living at my parents, and raising a puppy. But I had this living, breathing, gorgeous, beautiful soul who needed me to take care of him, and that really gave me purpose. And now that it’s over 20 years later, I realize that I think I was trying to redo a lot of what I wish had been done for me. I had a really loving but flawed family. I suffered some abuse from my brother, and I wanted to raise this dog in a way so he was never scared, so he knew he was safe.

Then, we moved to Seattle. I won’t spoil it too much, but then Bunker, my dog, had his own really severe and dangerous diagnosis. He had saved my life, and now, it was up to me to save him. And we did save each other.

I started to write Dog Medicine because it was the truest thing I knew. I was thinking of my younger self. I needed this book when I was in my darkest days. And I wrote it for that purpose. I didn’t ever intend for it to be a bestseller, and I feel really blessed that it was. I get messages every day from around the world. It’s been translated into nine languages. This book spoke to somebody who really needed it, and they didn’t think anybody else had this deep of a connection with an animal. And it’s not always dogs. Sometimes it’s a cat, sometimes it’s a bird, sometimes it’s a horse. The message that I’m taking away, and have known in my heart all along, is that we are all in this together — humans, animals, trees, nature. There is no hierarchy. We are all interdependent on each other, and for us to survive, we have to have intense mutual respect, which we’ve lost.

Nina: Wow, that’s an amazing story. I really love your philosophy and agree on so many levels. Going back to Bunker, why do you think that your connection was so successful at helping you overcome the depression and issues that you were going through?

Julie: I think it was a combination of a lot of things. He was an incredibly sensitive animal — not just to me, but to everybody that he met. And he was a puppy and needed focus and attention, needed to learn, and I wanted to teach him. For me, I always felt like I couldn’t 100 percent trust human beings, but I could trust the natural world, and I could trust dogs. A lot of my issues center around the questions, “Am I good enough? Does anybody actually truly like me? Am I interesting?” I have a lot of real insecurities and still do. I’m still struggling with that, but I never questioned whether or not my dog liked me.

So, that connection was a foundation for me to start again as an adult. It was a very specific moment that I’ll never forget, where Bunker was probably doing some undesirable puppy thing, and I was frustrated and went and sat on the couch. He was across the room, and I just thought, “What am I doing? This was a mistake. Why did I get a dog?”

I put my face in my hands and started crying. Then, I felt his weight on my feet. He came over and leaned against my shins. He did that kind of goofy puppy flip of the head and looked at me like, “Are you okay? Is this better?” It was just — he noticed.

He helped me cope with my depression in a way that was really healthy. He got me outside. It’s hard to be thinking negative thoughts when you’re chasing after a dog through a field, you know?

Nina: Yes, it really is. That is beautiful. Why do you think dogs tend to have such a positive effect on us?

Julie: There are scientific studies — my husband is a scientist, so he likes this part — where they’ve done brain scans that show when you pet a dog, your brain releases oxytocin, which is the love hormone. And I personally think that, despite all of the horrible things that we may feel sometimes about people and human nature, we are nurturers at our core. We want to help people and animals. For me, taking care of an animal gave me purpose, and I needed a purpose.

Bunker made me a different person. When we were walking in the streets of Seattle, people would drive by and smile, and that helped me to see that there was a really beautiful side to humanity that I, in my dark places, wasn’t able to see.

I also personally think that the natural world is so integral to our well-being. Bringing an animal into your house is a way to bring the wild into your house because you need to start to speak their language. I think part of this is all just a way of having the biggest healer of all, which is nature, in bed with us at night, or at least at our feet, keeping them warm or purring next to us.

Nina: That’s really nice. There is something special about being around animals. So, switching direction slightly — with what is currently going on with COVID-19, people are feeling depressed or isolated or anxious. Do you have any general tips for people just to help get through this?

Julie: Yeah, I do. I think it’s really important that everybody notices that we’ve basically all gone to our rooms, which can be a beautiful thing, but it can also be a distressing thing because when you go into your room, you’re in your head. And it isn’t easy to get out when there are less distractions. It’s very easy to start to think certain things about yourself, things you fear most — that you’re not needed, that you’re not worth anything.

But here’s the other side of that — because we’ve gone inside, the natural world, at least where I am, is doing this fascinating blossoming. I live in the Bay Area, and I saw a bird I’d never seen before — a white-tailed kite. I’m seeing woodpeckers all over the trees now. There are squirrels everywhere. We heard coyotes in the middle of the day. There are turkeys wandering around the street. And foxes wandering in my town now. This is inviting us to rethink how we communicate with the natural world because it’s all right there.

And obviously, for anyone who has adopted a puppy or kitten, they know it’s a fantastic distraction. Hopefully, we’ll see that all of those dogs and cats stay in these new homes once life resumes, if it does, to normal. But it gets you outside, having a dog. I have to walk three miles every day. I have two rescues and one puppy from a friend of mine’s litter. I have to walk three miles with the puppy every day. It’s so good for me because I wouldn’t do it otherwise.

Also, we were all running around too fast before. Sure, I’ll hop on a plane. Sure, I’ll drive here. Sure, I’ll go there. Sure, I’ll go halfway across the world. And in the back of my mind has always been, “what’s the environmental impact of this?” What impact is this going to have on the ecosystem that these animals — animals that I think are so magical — are relying on. I’m hoping that this gives us pause to say, “Okay, if I rush back out into the world, I’m never going to see a fox in my neighborhood again. If there’s constant traffic noise, those birds aren’t going to come around and land on the tree across my house and astonish me.”

In ancient cultures, a Shaman was somebody who listened to the stories the trees had to tell and who heard a message from a hawk and came to tell the tribe, “This is what I heard.” And everybody honored that, and it was considered sacred. I truly think that feeling incredibly sensitive — paper-thin sensitivity — is a superpower. In fact, people always told me when I was a kid, “Don’t be so sensitive. It’s just a frog. Who cares that it got run over?”

For me, I felt it deeply because that’s just who I was, and I really wish that somebody, when I was a kid, had honored me and come to me and said, “You really see this stuff. You really feel this in a way that is remarkable and what a gift that you have. Use it for good.” It wouldn’t have taken me to my mid-forties to come out, you know? Just reach out, have faith, and go outside.

Julie currently resides in Northern California with her husband Greg. You can find her on Facebook, Twitter, and Instragram, or at byjuliebarton.com.

Purchase Dog Medicine on Amazon or Barnes and Noble.