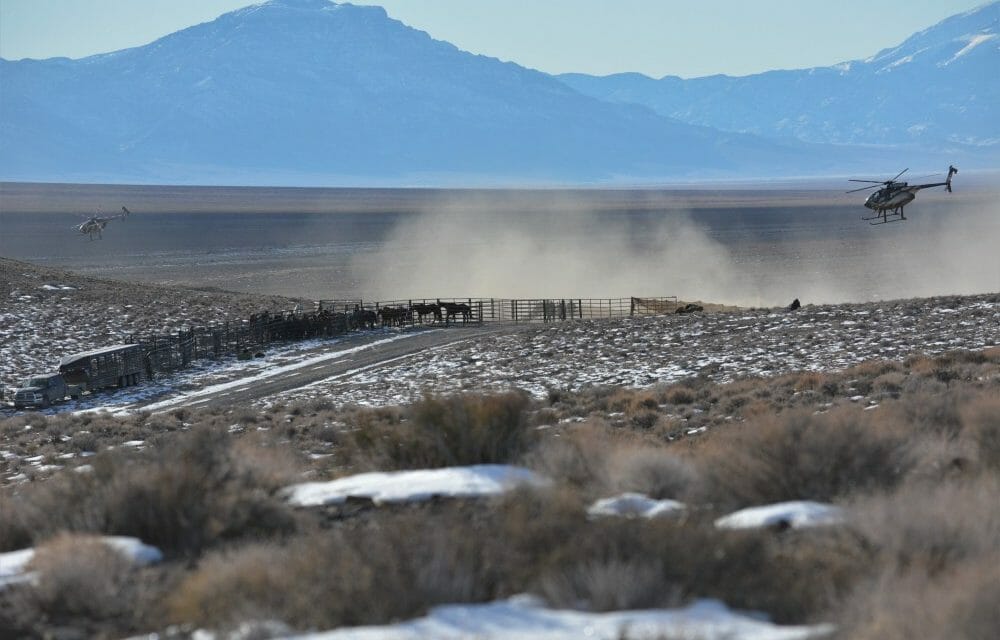 Horses being rounded up via a helicopter operation in the Pancake Complex. Image via BLM

A judge will allow a controversial horse roundup to continue in central Nevada that already has resulted in the deaths of 13 wild horses – including a foal pursued by a helicopter for a prolonged amount of time despite having a broken leg.

Chief Judge Miranda M. Du cited low foal birth rates, reported costs to the Bureau of Land Management (BLM) for any delays, and an imminent deadline for gathers using helicopters in her ruling that “the balance of equities and the public interest weigh against enjoining the gather.”

The Bureau of Land Management (BLM), the federal agency tasked with managing America’s wild horses, initiated the gather on Jan. 6 within the Pancake Complex, a vast swath of more than 1.2 million acres, including  849,613 acres – or 69 percent – of public land that spans the Sand Springs West, Pancake, and Jakes Wash herd management areas and the Monte Cristo Wild Horse Territory.

The BLM has decided that only between 361 and 638 horses can inhabit that territory to maintain a “thriving ecological balance,” whereas the agency reports there are 3,244 wild horses currently.  The agency cited concerns about inadequate water and forage resources as the reason for the roundup, which took place about 30 miles west of Ely, Nev., with a stated goal of permanently removing more than 2,000 horses.

Their approved gather approach involved using a low-flying helicopter  to herd the wild animals toward corrals – a frequently used method criticized by Lady Freethinker and other wild horse advocates given documented, serious  injuries and deaths that frequently result.

In mid-January, three advocacy nonprofits – the CANA Foundation, Animal Wellness Action, and Wild Horse Education – sued the BLM, the BLM’s Nevada State Director, and the U.S. Department of the Interior, alleging the roundup was inhumane and illegal and seeking an immediate halt to the roundup.

The lawsuit alleged that the BLM was exaggerating drought conditions and that the approved plan did not address a site-specific herd management area, in violation of the Wild Horse Act. The lawsuit also alleged the roundup violated the National Environmental Policy Act (NEPA) and the Administrative Procedures Act (APA).

In her ruling, Du noted the BLM had reported the condition in the Pancake Complex as “dire” and cited low birth rates for foals caused reportedly by a “lack of resources mares need to feed.” She also referenced low body scores observed, a 2-year severe drought, a March 1 deadline for helicopter-assisted gathers due to the foaling season, and a $20,000  reported cost by the BLM regarding labor, travel, and operations costs for each possible day of delay.

Casualties mentioned in the lawsuit include a colt pursued by a low-flying helicopter driving a herd toward a holding pen despite having a “clearly broken” leg who reportedly suffered for 29 minutes before being euthanized and a “single wild horse pursued for over an hour”, according to the lawsuit.

The 13 horses who had died during the gather as of Jan. 31, according to the BLM’s daily gather reports:

“We conduct gathers like this to ensure that the health of the rangelands and the wild horses are not at risk due to herd overpopulation and severe drought conditions,” said  Robbie McAboy, the BLM’s Ely District Manager, in a press release. “As always, we are committed to conducting safe and humane gather operations as we work to protect animal health.”

Laura Leigh, president of Reno-based Wild Horse Education, said in a press release that it was  “a charade that they (the BLM) care about wild horses,” while Wayne Pacelle, president of Animal Wellness Action, also condemned the roundup’s details.

“The Bureau… is depopulating the West of its wild horses and burros herd by herd and burning through taxpayer dollars with their endless roundups and holding facilities,” Pacelle said. “It’s then allowing ranchers to pour cattle and sheep onto the land, making a mockery of their false claims about horse impacts on the range.”

The Pancake Complex’s herd management areas allot 59,427 AUMS (Animal Unit Months) for livestock grazing, according to the BLM’s environmental assessment approved in May 2021. An AUM generally is used to measure the amount of forage that one 1,000 pound animal would require each month.

The horses permanently removed from the range will be relocated to two locations in Nevada – the Palomino Valley Wild Horse and Burro Center in Reno, and the Indian Lakes Off-Range Wild Horse and Burro Corral in Fallon– and to the Sutherland Off Range Corral, in Utah, where they will be prepared for the BLM’s adoption and sale program – the same program that the NY Times exposed this year for selling the iconic animals to slaughter.