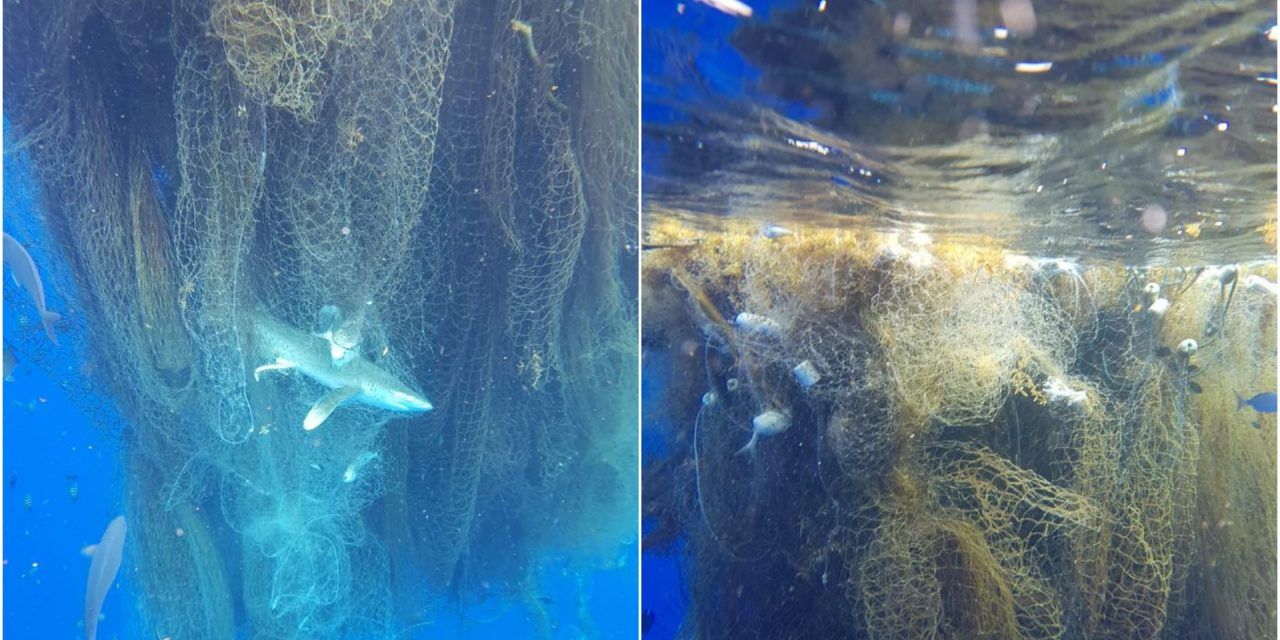 A massive abandoned fishing net has been discovered in the waters off the coast of the Cayman Islands, containing hundreds of dead fish and sharks.

Discovered this week by Dominick Martin-Mayes and his friends, the 27-year-old fisherman and diving instructor said they came across the 50-by-50-foot net just north of Grand Cayman in the Caribbean.

“At first we thought it was a log, but as we got closer we could see it was a net with floats,” said Martin-Mayes. “I jumped in the water first and was shocked at what I saw. It took my breath away – the first thing I saw was the juvenile oceanic whitetip [shark].”

The divers attempted to cut some of the trapped animals free with a knife, but quickly realized that most of them were already dead. They were able to release several fish and a shark from the net.

“The more that get caught, the more that come in to eat it and get caught themselves,” he said. They attempted to tow the net back to land, but it was too heavy and they were forced to leave it behind; howeve, they did report the coordinates to the Department of Environment.

Once alerted to the presence of the net, the Cayman Islands government reached out to boaters in an effort to locate the net and remove it.

According to Tim Austin, deputy director of the Department of Environment, it appears that the net had been drifting for quite some time, due to the number of creatures entrapped within it.

“If we can locate it, we can assess whether we can recover it or tow it somewhere to secure it until it can be dealt with safely,” he said. “We don’t want it to end up in the reef and we need to stop its deadly ghost fishing.”

Ingrid Giskes, Global Head of Sea Change at World Animal Protection, says that at least 640,000 tons of ghost fishing gear are lost into the ocean every year, killing and injuring millions of animals.

“It’s devastating to see yet another ‘ghost net’ that is continuing to catch and kill marine life beneath the waves,” said Giskes. “Abandoned, lost or discarded fishing gear is a problem that spells catastrophe for marine life as we know it. 45% of all marine mammals on the Red List of Threatened Species have been impacted by lost or abandoned fishing gear and as much as 92% of marine animal-debris encounters involve plastic debris. 71% of entanglements involve plastic ghost gear.”

Giske said that ghost gear is four times more likely to affect marine life through entanglement than all other forms of marine debris combined.