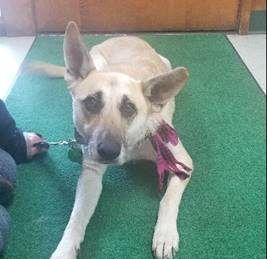 Thanks to an organization that assists the pets of homeless Americans, a three-year-old German shepherd named Charlie Rose has regained her health.

The organization verified Jessalyn’s homeless status with the Department of Human Services and approved Charlie Rose for a medical exam at Morgan Veterinary Hospital. She received a urinalysis, as well as injections, ear cleaning, and medications for skin issues.

Two weeks later, Charlie Rose returned to the vet for another checkup and a follow-up urinalysis. She received additional antibiotics and special food to help dissolve the crystals in her bladder.

Feeding Pets of the Homeless recognizes the importance of pets in the lives of homeless people and the therapeutic effects of the human-animal bond. Since 2008, they have provided financial assistance for basic emergency care, as well as food and other necessary materials, such as crates.

There are currently around 3.5 million homeless Americans, and between five and ten percent of them have pet dogs and/or cats. Pets give homeless people warmth, security, and a sense of normalcy. They also sometimes protect their guardians, who may find themselves in vulnerable situations.

Many homeless people put their furry friends before themselves and are willing to go without to ensure the well-being of their pet. The assistance given by Feeding Pets of the Homeless enables pet parents to put more of their very limited resources toward getting on their feet without having to part ways with their companions.