Hero Officer Adopts Homeless Kitten He Rescued from A Snowbank 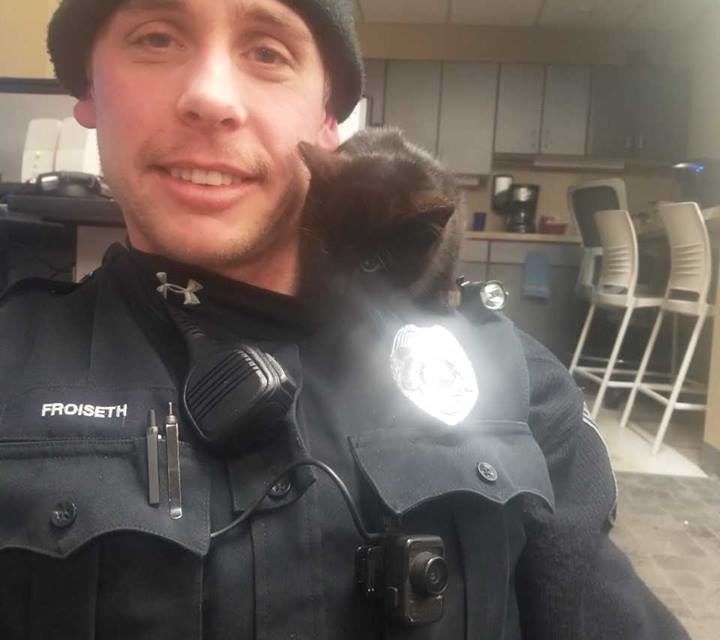 When a total lunar eclipse occurred on January 20, Officer Matt Froiseth of the Platteville, Wisconsin Police Department stopped alongside Highway 151 to check it out. As he admired the blood moon, he heard a kitten meowing from the direction of a nearby ditch, which was covered in three feet of snow.

After digging the kitten out of the snow, Officer Froiseth brought the little guy into his squad car and warmed him up. They became fast friends – the kitten welcomed the officer’s helping hand and curled right up with him to take a nap.

Shortly after the kitten was rescued, he was taken to the Platteville Veterinary Clinic. The Platteville Police Department posted about the adorable rescue on their Facebook page, and included information about how to claim the kitten.

But Officer Froiseth had become inseparable with his new buddy and couldn’t bear to part ways. He decided to give the kitten a much-needed “furrever” home – something his colleagues, who noticed their bond, were hoping for.

The kitten was named Donut and taken home to his new family. According to a recent update, Donut is becoming comfortable with his surroundings, despite the typical ups and downs that are expected with any new family member!

While stories like this remind us that looking out for the safety and well-being of animals is part of every police officer’s duty to their community, news of an officer adopting an animal they rescued is a heartwarming bonus!