A very heartwarming video from Wildlife Friends Foundation Thailand as they welcome the newest arrival to their elephant sanctuary! The sanctuary, called Thai Elephant Refuge, recently took in a precious rescued elephant to their herd. This darling new elephant is named Boon Dee, and she is half blind from years of mistreatment and abuse in the tourism industry. Boon Dee has spent most of her life giving rides to hoards of tourists at a trekking camp in Pattaya, Thailand.

This recent rescue was made possible by the generous donation from a longtime sanctuary supporter who was visiting Thai Elephant Refuge from Australia. The compassionate supporter, Joan Pearson, was celebrating her birthday, and wanted to spend it in her favorite place in the world surrounded by the animals she loves. Her only wish for a present was to be able to rescue another elephant. When Wildlife Friends Foundation Thailand learned that there was an elephant in need of rescue in Pattaya, the team — including Joan — headed out to investigate.

What they found at the trekking camp was a heartbreaking situation. Having arrived at the camp four years ago, Boon Dee was in a terrible state. She was emaciated and covered in abscesses, obvious marks of the abuse and neglect she had suffered. WFFT knew it would take the healing power of a sanctuary to return the elephant to full health. After completing all of the necessary paperwork, Boon Dee was finally legally allowed to make the long journey to the WFFT rescue center. 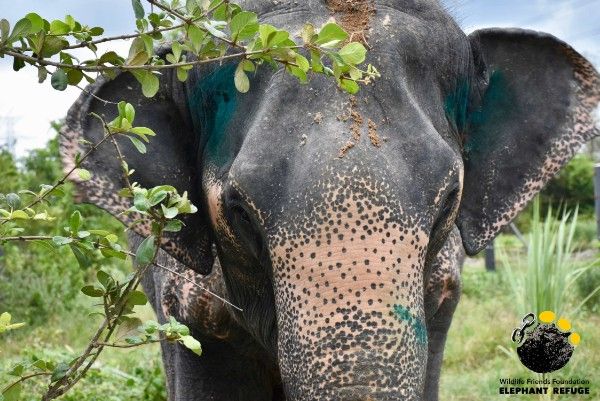 Now that sweet Boon Dee is finally safe and sound she can look forward to a life free from pain; never again will this gentle giant be chained or beaten. Also most importantly: never again will she have to carry a saddle on her back, or be forced to give rides to the endless busloads of tourists who visit the camp where she was forced to work.

After arriving at the sanctuary Boon Dee was able to stretch her legs after the long journey. She took a stroll around the rescue center and took a look at the wonderland that will be her new home.

Everyone watched in amazement as Boon Dee made a beeline for the first elephant enclosure and greeted its inhabitant, Gan Da. The WFFT staff knew that these two elephants had previously been friends when they worked together in a camp in Thailand many years ago, and everyone wondered if they would recognize each other. These two darling elephants recognized each other immediately and had a very sweet reunion!  Thanks to the determination of Wildlife Friends Foundation Thailand, Boon Dee can make many other life-long friends at the Thai Elephant Refuge!