The Havoc of Hurricane Harvey & How You Can Help

Home » Editorial » The Havoc of Hurricane Harvey & How You Can HelpBy Mike Soszynski | August 29, 2017 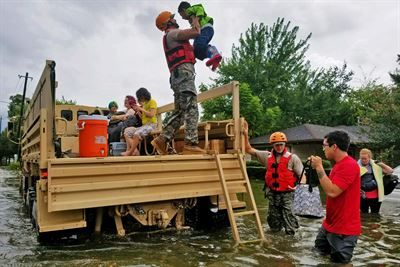 Southeast Texas is reeling. Coastal towns like Rockport have been devastated by extreme winds. Houston has been hit by trillions of gallons of rain. Rivers, streams, creeks, and bayous have risen at alarming rates. Officials have issued mandatory evacuation orders over concerns of levees overtopping or breaking.

The storm has affected nearly 7 million people in 18 counties. Ten people are dead and thousands are displaced (and assessing the true extent of the impact has not even begun). The area’s most vulnerable residents have felt a magnified impact. For example, Houston’s homeless population often take refuge in low-lying spaces (e.g. under freeways and bridges) that are most dangerous during flooding. It should go without saying that local nonhuman animals are also affected.

You might have wondered what you can do to help. If you live in Texas or near the Gulf area there are volunteer opportunities on the ground and ways to help those who have been displaced (e.g. using your boat to assist local rescue efforts or offering a place to stay for free via AirBnB).

If you do not live in the area or are unable to volunteer, supporting organizations and people who are on the ground is another option. Most charities prefer cash to physical material donations—they don’t require transportation costs, shipping delays, or time managing goods.

Here’s a list of five organizations to consider giving to (by no measure is this a comprehensive guide– check out some other sites for more ideas):

Direct Relief (select “Hurricane Harvey” from the drop down menu)

Coalition for the Homeless