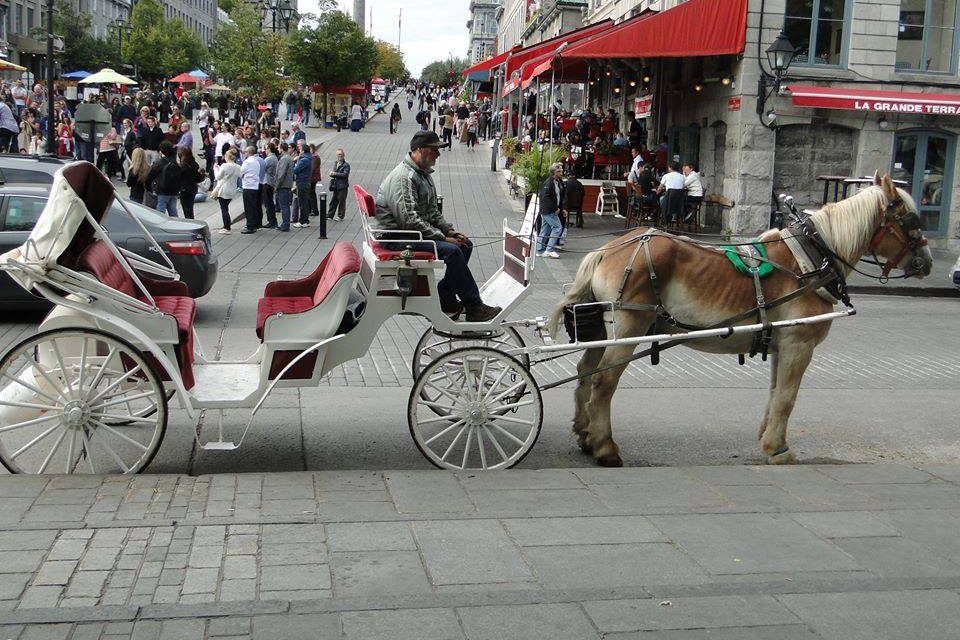 The city of Montreal has just adopted a draft bylaw that will see horse-drawn carriages banned from the streets starting in 2020. The bylaw has already been approved by the executive committee and will be brought to the city council later this month.

Horse-drawn carriages have been a large part of Montreal’s tourism industry for generations, with advocates claiming they are an important part of Montreal’s old-world appeal. But animal activists maintain that a busy, modern city is no place for a horse. The carriage horses in Montreal are exposed to traffic, rough city pavements,  long work hours and often extreme weather conditions. Some studies have shown that horses constantly exposed to traffic fumes can develop emphysema, cancer and respiratory issues, not to mention lameness and foot problems associated with constantly walking over solid cement surfaces.

“Montreal is saying it’s time to move past the calèche industry,” said Craig Sauvé, the city councilor in charge of animal matters. “When I see them after a long time and they’re struggling and they don’t look particularly happy, I feel sorry for them. I say, ‘Is this where we are as a society?’”

Of course, the move is not popular with the calèche owners, who protest that their horses are looked after well and receive regular veterinary check-ups. They threaten that their horses will have to be slaughtered if the ban goes ahead. However, the Society for the Prevention of Cruelty to Animals (SPCA) is confident that the period for phasing them out will provide sufficient time to find the horses a place in a suitable sanctuary.

“We promised in the campaign to put an end to this industry, and we’re giving them a year and a half to adjust and we think that’s enough time,” said Councilor Suave.

City officials revealed that since 2014 there have been four accidents involving horses, along with hundreds of complaints. Also, officers had issued 14 tickets to calèche owners regarding animal welfare or carriage issues in the last two years.

Mayor Denis Coderre attempted to enforce a similar ban in 2016; however, the carriage drivers went to court and managed to obtain an injunction, so Mr. Coderre was unsuccessful. Following this, new regulations were introduced in 2017 that limited the horses working days to nine hours (but still seven days a week) and prohibited them from working in temperatures over 28C.

“By putting an end to this antiquated and inhumane industry, Montreal will be following the lead of several other world-class cities, such as London, Paris, Beijing and Toronto,” said the Montreal SPCA.

We support this move by the Montreal city to end the cruel and unnecessary exploitation of horses for money and hope that this move can inspire other cities that still utilize carriage horses, such as Quebec and New York City, to enforce similar bans.