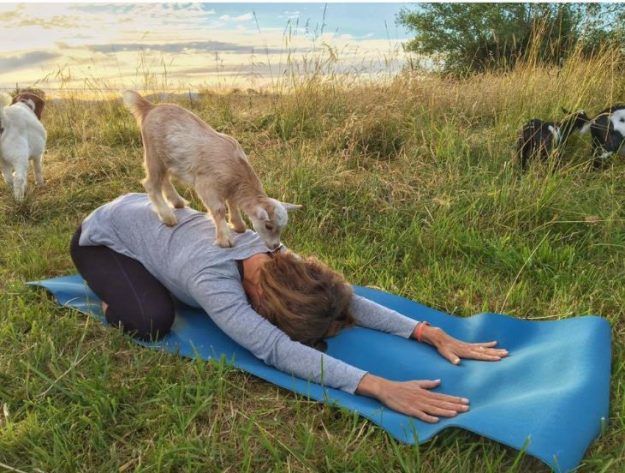 Downward goat, anyone? Get your yoga mat and your bottle of water; the goats are waiting for you at No Regrets farm in Western Oregon.

Lainey Morse of Albany, Oregon, owns a small farm boasting beautiful 360-degree views of the Coastal Mountains and the postcard perfect Willamette Valley. She adopted some pygmy goats as pets, and she’s sharing them with people who need some loving goat therapy.

The idea of Goat Yoga was conceived when Morse hosted a children’s party as a charity auction prize. One of the moms, a yoga instructor, suggested that the soothing, natural environment of the farm would be a great fit for yoga. Morse said she would give it a try, and wanted her goats to be allowed to prance around during yoga sessions. Having enjoyed the silly happiness that the goats spread, Morse knew that they would be a fun and therapeutic complement to the usual yoga routine.

People travel from states hours away to experience the tranquil combination of nature, animals, and yoga. Some of the visitors are depressed, anxious, or recovering from cancer or other illnesses. Relaxing with frolicking goats makes them smile.

As guests stretch, bend, and twist into poses, goats pop by to stand on their back or manage to snuggle into the yoginis’ arms, thus combining a disciplined practice with humor and sweetness. Morse’s goats are also involved in animal assisted therapy for people suffering from depression or disabilities.

When the local newspaper wrote an article about Goat Yoga, the story went viral and now there’s a 1,200-person waiting list that continues to grow.

Most of us are more familiar with cat, dog, or horse therapy; but goats are great company as well, and this isn’t the first time they’ve helped ease humans’ minds. Debbie Cassidy in East Texas operates the Hoegger Farmyard, and also uses her goats for therapy.

She explained, “Research indicates that interaction with therapy animals can temporarily affect the release of various neurotransmitters in the brain; levels of oxytocin (linked with bonding) and dopamine (involved in the reward-motivation system) are increased, while cortisol levels (an immunosuppressant associated with stress) are decreased. All of which are very beneficial to the patients.”

Goats love approaching and interacting with people, and are always ready to cuddle. Goat therapy & Goat Yoga are on the rise — as are the spirits of those who interact with the gentle animals.