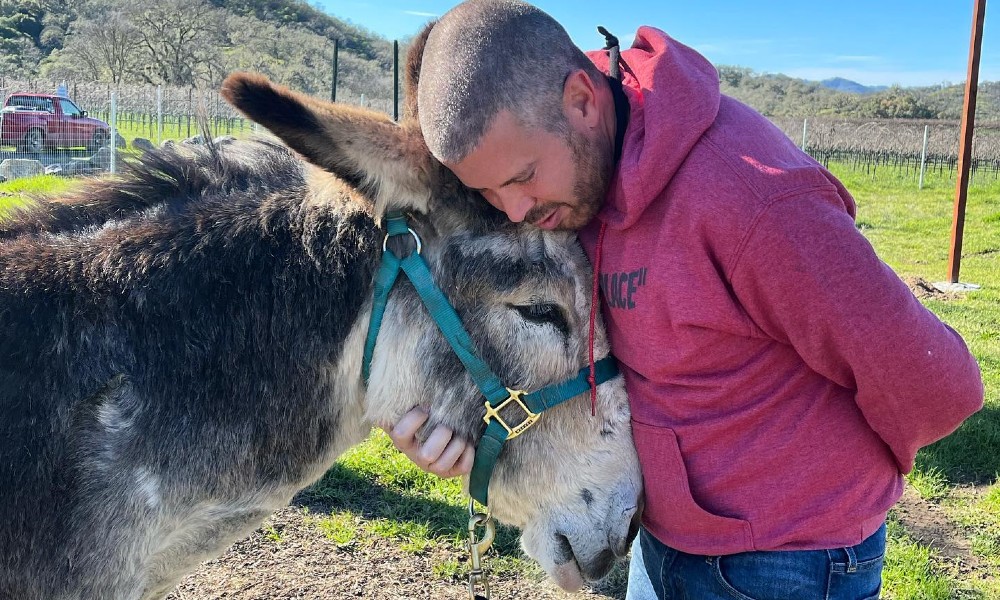 As Ron King walked the land of a 75-acre property in northern California’s Mendocino County, he tapped into a new feeling — serenity.

He realized there were things about his former life as a Time Inc. media executive he had enjoyed — Versace clothing and his Mercedes among them — but that those same things did not bring him joy.

That a-ha moment catapulted King back to an earlier experience about a week ago. He was sitting by a pool on the property, “working on his suntan” and scrolling through TikTok, when he came across a tearful entreaty from a woman about a donkey slaughter auction in Texas.

He had deemed the donkeys’ circumstances “sad” but not made any immediate plans to do anything about it. But the plight of the animals kept tugging at him. Research led him to an article by The Guardian about donkeys massively culled for ejiao (pronounced eh-gee-yow) — a gelatin made with donkey skin that’s believed by some to have medicinal properties — as well as informational stories about how smart and special donkeys are.

King reflected. The moments in his life that had brought him the most joy were those in which he had a positive impact on others or contributed to something bigger than himself — adopting his son and helping friends find ways to manifest their dream lives being among the highlights.

That knowledge — coupled with the newfound sense of contentment from the land, whose custodian Phil Selway had at one point intended to be an animal sanctuary — inspired King to pitch a “crazy” idea.

He drew up a business plan to transform the land into a donkey rescue and adoption center and approached Selway, whose lifelong dream was to leave a legacy for animals.

King had no professional experience with donkeys. He also had never even seen a donkey. Selway likely was so shocked by the proposal that he didn’t know what else to say in the moment besides “Yes,” King said with a laugh. 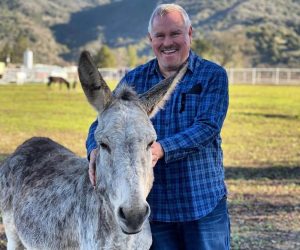 But then there were practical matters.

King recalled that Selway followed up with, “‘Ron, that’s crazy. Have you even talked to this woman?”

“I hadn’t,” King told Lady Freethinker. “He (Selway) then said, ‘What if she doesn’t want to give you the donkeys?’ So I walked outside from that breakfast and I called her. I told her I happened to be positioned on this ranch in California, and I want to help you. If I house donkeys, will you bring them to me? And she started crying and said ‘Absolutely.’ So I went back (to Selway) and said, ‘Okay, we have donkeys.’”

Of that first meeting,  King — who wasn’t sure initially if he would even get along with the donkeys — said he “fell in love.”  He quickly learned each donkey had a distinct personality.

Goose, whom the organization describes as the “most relaxed” donkey at the center, and Pickles quickly became inseparable. Meanwhile, Shadow kept to the corners or hid in the barn until staff earned her trust — after which she followed them around, becoming their “shadow,” the website notes. 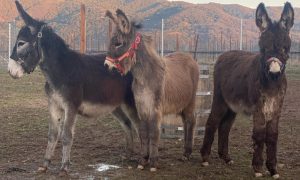 The affinity King felt for the misunderstood equines fueled his desire to help rescue even more donkeys.

“Donkeys are some of the most loving and trusting creatures on earth,” Oscar’s Place notes on its website. “They deserve better than to be abused, crowded into horrifying transport containers and shipped off to slaughter facilities.”

The Global Federation of Animal Sanctuaries verified Oscar’s Place as a true sanctuary for animals in 2021. To date, the organization has rescued 175 donkeys, rehomed 58 donkeys, and delivered 22 babies, King said.

King’s connection to the donkeys deepened with every rescue, including with a sweet silver-white adult donkey rescued from a kill auction who came straight off the transport trailer and put his head against King’s chest.

King named him Viejo. The donkey is now a permanent resident of Oscar’s Place and King’s best friend. 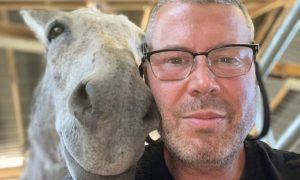 King paused in his interview with Lady Freethinker, his eyes lighting up as he asked for a moment to “talk about donkeys.” He then detailed how smart they are — capable of learning at the same pace as dolphins and dogs, and with a limbic system similarly sized to that of humans — and of their incredible memories.

While media portrayals have inaccurately branded donkeys as “stubborn,” King says their superb sense of self-preservation causes them to cautiously assess each situation. A donkey who suffered following a trailer ride likely won’t step back onto a trailer, knowing something horrific might happen at the other end.

“Donkeys are just like us,” the organization wrote in a blog post. “They can stress out and be depressed, happy or melancholy, angry or indifferent, and much of it revolves around the pack and their environment.”

Sadly not all the donkeys who arrive at Oscar’s Place have the trusting nature of Viejo. King said they arrive with auction stickers superglued to their hides, many suffer from lice and pneumonia, and most are carrying significant trauma.

“These donkeys are really damaged,” King said. “Then they have to endure an 18 hour trailer ride, and when they get here they are done. We start with physical recovery; then we move on to emotional recovery.”

Donkeys amendable to human touch get lots of hands-on interactions each day from dedicated staff. For those more wary of humans, a staff member will take a stool into their pasture and sit — a respectable distance away — for hours on end until the donkey starts to trust again.

Some of the donkeys, like Amber, come around. King shared that Amber’s owner surrendered her, and the donkey was so sad that she stopped eating. Staff diligently monitored and spent time with her, bringing her back from the brink of starvation and she’s doing better today.

But other donkeys may never be able to be socialized — and that’s okay, King said.

One of those donkeys is Ellen, a now permanent resident of Oscar’s Place, who “made it clear she hated humans” upon arrival at the center. In May, Ellen foaled — and staff thought they had a breakthrough with her, since she trusted them around her baby.

But then the baby, who was born with a congenital defect that King described as a “hole in her heart,” died  — and Ellen now will “have nothing to do with humans,” King said.

Ellen does have the support of three other donkeys, who now also are permanent residents since the team thinks of them as “Ellen’s,” King said. 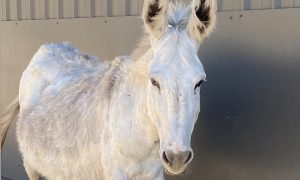 For donkeys who can be socialized and sent to loving, forever homes, Oscar’s Place’s adoption requirements are strict to ensure that donkeys remain “retired” and aren’t exploited.

King won’t adopt out donkeys for riding, breeding, working, or petting zoos. He also declines proposals from wineries, which he said often feature photos with donkeys for “Instagrammable” weddings. He also won’t separate bonded pairs, mothers from their babies, or donkeys to a residence where they would be the only donkey.

While donors, volunteers, and potential adopters can tour the property, Oscar’s Place is not open to the general public. King also declines requests of special interest groups or groups of children so that he can prioritize the donkeys’ needs and their healing journeys.

“This is a donkey’s first sanctuary,” he said. “I learned early on that for this to last, I had to be very clear on my mission. Healing of humans is not my mission. My mission is healing donkeys. My mission (for donkeys) is ‘If you are here now, we’ve got you.’”

He’s also clear and open about why he chooses to obtain donkeys from auctions in Texas — where they can easily be transported over the Mexican border, where it’s legal to slaughter them.

“If I didn’t pay a very minimal fee for Viejo, he would be dead,” he said. “I do know, with zero questioning, that the animals I didn’t rescue would be dead.”

“A lot of people don’t know about donkeys,” King said. “Sharing their stories helps us raise their profile.” 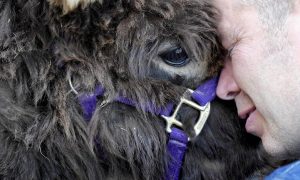