From Frisky to Frannie: How one little rescue dog found her forever home 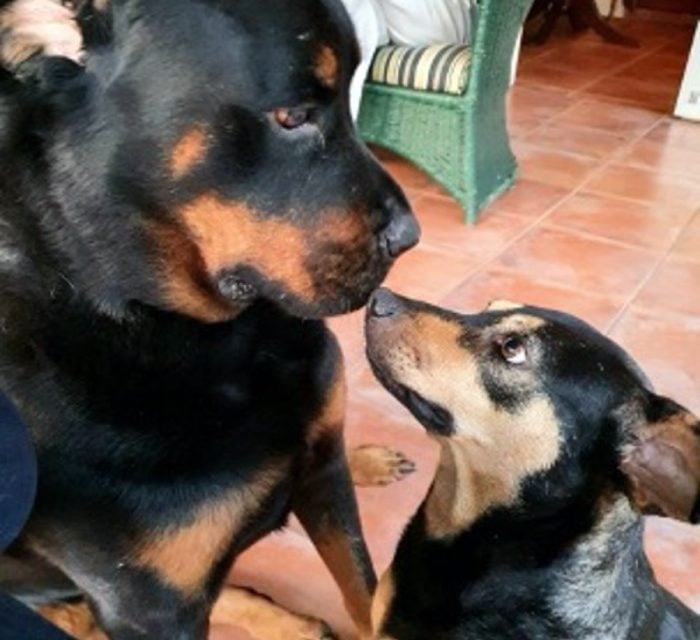 Editorial Note: This is a guest post featuring a personal story from a rescuer dedicating her life to saving animals.

Frisky was the friendliest of our group of strays, so much so that we wondered whether she might at one time have lived with a family and been dumped, or stolen, or wandered off through a gate, left carelessly open. 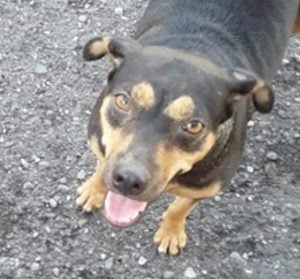 It goes without saying that she was my favorite.

She began trying to get into the car with me at the end of the morning feeding sessions, and sometimes I would let her clamber onto my lap, where she would sit for a while looking contentedly up at me. Neither of us was happy when I had to push her out and go home, and I began to have visions of bringing her home with me. But our stray numbers were already in the double digits and I couldn’t stretch the house or make the small garden any bigger!

So they were just fantasies, and I allowed myself to dream, thinking that if I found a way to take her home I would change her name to Frannie.

At the time I was suffering very badly with sciatica and had, in fact, scheduled surgery as the pain was unbearable, and no amount of medication, or exercise, helped.

But of course I went on with my usual activities, and one morning while our little group was enjoying their breakfast in a cluster on the street (they all get along and no one fights), a man came around the corner with two enormous dogs on chains – a white pitbull and a black rottie – pulling him in different directions.

To my dismay the dogs approached and the man did nothing to stop them ploughing into my little group. I began to shout at him to move them away, and he laughed.

Then the rottie got hold of Frisky, his enormous jaws enveloping her entire back end, and lifted her in the air, shaking her from side to side.

The man continued to laugh.

Without thinking I ran over to him, grabbed the rottie’s heavy chain out of his hand and yanked it back as hard as I could, nearly toppling over backwards with the effort. The rottie was so surprised he looked around and in the process let go of Frisky, who scampered away.

Needless to say, I took off in the opposite direction, thinking that I had probably ruined my back forever. But quite the opposite happened. The pain began to abate that same afternoon, and within two days was gone completely. A miracle? A lucky chiropractic maneuver? The sharp movement rupturing the cyst that was sitting on my spine?

In any case, I was so grateful I wasn’t asking the universe any questions and concentrated on treating Frisky’s wounds, which healed up nicely in a week or two.

Then a couple expressed an interest, and we took Frisky to visit, hoping that she would get along with their gorgeous 100-pound rottie named Billy, who they said was a teddy bear in disguise. I did have some reservations, remembering what had happened to her just recently, and sadly, it seemed that it really was too soon. The memory of the attack filled her with abject terror, making her lash out, while Billy got over-excited and came on a bit strong. A

fter a lot of huffing and puffing and baring of teeth we began to think, regretfully, that this just wasn’t going to work.

As a last-ditch effort, we agreed that Frisky would stay in an area separated from Billy by a stout picket fence, where they could see each other but not touch, and if they hadn’t made friends by morning we would come for her. I knew I wouldn’t sleep a wink.

However, later that afternoon the lady called me and said she had taken matters into her own hands and called in her trainer, and he was working on Frisky’s fear, and Billy’s effusiveness.  He guaranteed that in a few sessions they would be best friends.

So said – and incredibly – so done. By later that week they were happily eating and playing together.

Billy, being a big fellow (to put it mildly), has his own couch in the living room and he graciously invited Frisky to share it with him, so they took naps together as well. 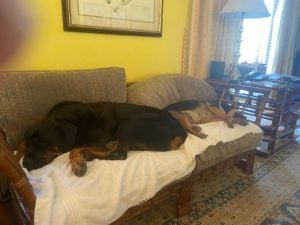 One day on the phone the lady said to me, “By the way I’m changing her name to Frannie.” My knees went weak. You can imagine the goose bumps that gave me and I even had to send her a screen shot of my photo file entitled “Frisky/Frannie,” to prove that I had the same idea. We agreed it was kismet.

However, fate reared its ugly head again. Frannie started spotting, then bleeding heavily, and they discovered venereal tumors, the treatment for which is complicated, and involves isolation and a special chemotherapy injected once a week for a month. With my heart in my mouth I croaked, “Should we put her to sleep”? And the lady replied, strong and determined, “Oh no, we love her, and we’re in too deep now anyway.”

Of course the pair were not happy being separated, and it was a very long few weeks for everyone, but eventually the isolation was coming to an end.

My concern was whether Billy’s frustration would manifest as aggression, but it didn’t. He was just too happy to have his lady back, and she was thrilled to be with him again.

I am immensely grateful to these generous and caring people who refused to give up on a little stray dog and are now able to enjoy the interaction of their beloved big boy and his little girlfriend.

Now I don’t mind that I couldn’t keep Frannie. She is happy right where she is.