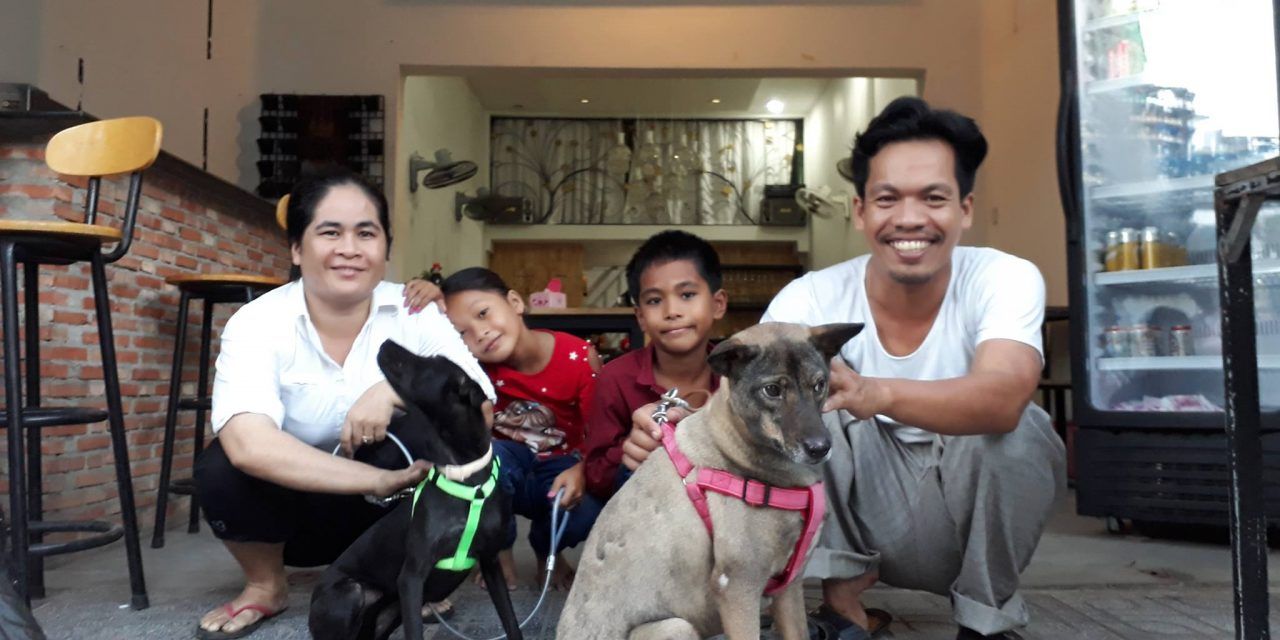 Picture of Sabay Vegilicious' founders via their Facebook Page.

It’s never too late to make a change, as Cambodian restaurant owners Syna and Mong can attest. The couple decided to shut down their former restaurant, which served dog meat, and opene a new, vegan restaurant – Sabay Vegilicious.

“Positive and compassionate at their core, they are striving to leave behind what was often sad and violent in their previous business, and trade it for a friendlier and more compassionate way to earn a living and to support their young children’s education and their own lives,” the owners are described on their Facebook page.

Before they opened Sabay Vegilicious in March of 2018, Syna and Mong were like many other Cambodian restaurant owners. They served meat, including dog meat, a common dish in Cambodia and many nearby countries.

“For five years, we served dog meat from our kitchen – and on an average day, we could expect to earn between $25-30 from sales,” Mong told a local news outlet, Khmer Times. “We didn’t know where the dogs came from – where the meat originated, the vendors never disclosed the facts to us.”

Over 30 million dogs are slaughtered ever year in this often illegal and unregulated trade. The conditions are brutal. Caged in close quarters, beaten, tortured, and left to suffer, the dogs who make it onto people’s plates in Cambodia and other countries where the meat is served lived terrible lives.

Yet, the demand exists, which creates an incentive for many restaurant owners to serve the meat, even if the owners don’t agree with the ethics.

Syna and Mong finally decided to risk opening a restaurant that doesn’t serve any meat after meeting with Marc Ching, founder of Animal Hope and Wellness Foundation, and receiving start up funds. The new restaurant opened in Phnom Penh in March, 2018.

“True compassion extends to all, human and on-human animal species!” The owners declared. “Of course, if one generalizes this concept of compassion and of not inflicting unnecessary harm to any living being, then not just dogs, but any animal species should be left off the plate. Therefore this is not only a restaurant not serving dog meat, but serving no animal products at all.”

Not only are these new dishes delicious, they are also guilt-free.

Although Sabay Vegilicious is popular with the expats, the idea of a purely plant-based meal may still be a little novel with the locals. Increasing awareness, delicious food, and patronage from caring clientele can go a long way to help Sabay Vegilicious, and other restaurants like it, grow.

And, in a bit of a twist, the only dogs you’ll see in Sabay Vegilicious are just hanging out with their human friends and not on anyone’s plate.

“We hope that the news of this ethical enterprise spreads far and wide, and that it may inspire other dog-meat businesses to acknowledge the immense reward that comes along with running a compassionate and ethical business,” said Syna and Mong.