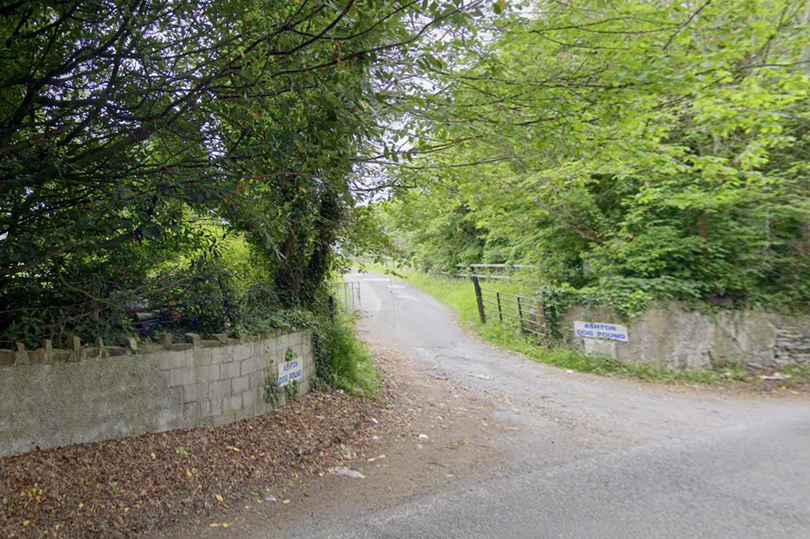 A Dublin dog pound has become the subject of an ongoing investigation by the Irish National Police into alleged animal cruelty, with one arrest already and a number of legislators calling for change.

Ashton Dog Pound, located on River Road in Dublin, has served the city’s four councils with dog pound and dog warden services for years, with hundreds of thousands of taxpayer-supported Euros tied to each council’s annual service contract with the pound — the equivalent of a cumulative more than $1 million USD.

Over the years, multiple people, including those who have adopted dogs from the pound, have alleged animal cruelty by the pound staff.

Fingal County Councillor Tania Doyle shared some of their concerns after she paid the pound an unannounced visit — as allowed by the councils’ contract — and encountered conditions she said were befitting of the sordid squalor of a Dickens’ novel.

“In front of me on a very bleak afternoon, I saw numerous dogs on cold wet concrete floors with no drainage, heat lamps supposedly in place to keep the animals warm not operating, no appropriate bedding in place,” Doyle told the Dublin Gazette.

It was a whistleblower complaint, in June 2020, that brought the An Garda Síochána, also known as the Gardaí or Irish National Police, swooping into an investigation of shelter operations.

The whistleblower said that untrained staff were feeding Dolethal, a controlled euthanasia drug containing pentobarbital sodium, to dogs scheduled for euthanasia — resulting in painful, prolonged deaths marred by intense suffering as the dogs’ organs slowly shut down, according to local news.

The drug is supposed to be injected, by a trained vet only, to bring a swift, compassionate end for animals.

On their initial visit in June, Gardaí agents seized bottles of pentobarbital sodium from an unlocked cabinet easily accessible to staff in the pound. They also seized the bodies of five dead dogs, along with a computer and pound documents.

Local news coverage reported the veterinary surgeon allegedly responsible for providing the controlled drugs to the pound is under investigation. A man in his late 50s was arrested in connection with alleged animal cruelty on Jan. 27,  according to the Gardaí, who don’t give out names during investigations.

The Sunday Times also recently dredged up claims from another whistleblower who had made similar claims three years ago about alleged malpractice, animal cruelty, and falsification of documents.  The whistleblower, a former dog warden at the pound, alleged that seriously injured dogs weren’t given veterinary treatment — including a greyhound with a broken leg — and  that pound staff were using lethal doses of medications to kill or sedate dogs at Ashton.  The whistleblower said, however, that he was never interviewed about the claims, according to the Sunday Times.

What’s exceptionally odd about the situation is that hundreds of pages of veterinary inspection reports from 2015 through 2020– obtained by Lady Freethinker through Freedom of Information requests from the councils — show an almost solid-wall of “Satisfactory” check marks by veterinary inspectors. A lone “unsatisfactory” mark noted some of the lighting wasn’t working.

Other comments, none of which resulted in “unsatisfactory” findings or in recommendations to shift pound services, indicated a handful of dogs demonstrating health issues — a few were aggressive, one was thin, another had diarrhea but was being treated — or that the pound had maintenance issues — paint covered some of the kennel’s ventilation ducts, the kennel floors needed to be sloped to allow water drainage during cleanings — that subsequently were fixed by future inspections.

One page of recommendations for improvements also noted the inspector had “concerns” about public access to the pound when staff weren’t present and “the protocols in place for handover of dogs by the public.” 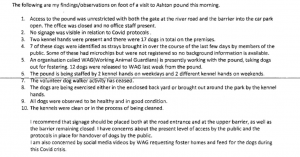 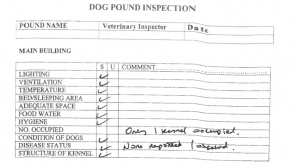 Veterinary inspection reports for Ashton Pound from 2015 to 2020 almost solidly showed “Satisfactory” conditions, according to documents obtained via FOIA requests.

During a September meeting of the South Dublin County Council, the council’s executive authority referenced these satisfactory reports and the monthly, unannounced inspections.

“None of these inspections have revealed any issues regarding the welfare of dogs in the pound,” was the response recorded in the meeting’s minutes. “The existing contract continues to be monitored and reviewed as part of the contract management and oversight. Policies and procedures are regularly reviewed.”

“From what we saw there were no recommendations on how to improve either in these reports, the writing was scant in every detail,”  PAW said via email.  “PAW are aware of the serious allegations, which span close on twenty years. Ashton sporadically rears its ugly head, inflicting the same torture of mind on animal lovers as it does on its unfortunate residents. Videos and photographs circulate regularly on social media and YouTube. Despite rigorous protesting outside its gates it has achieved nothing concrete in the way of progress.”

David and Carol Stone, the owners of the pound, did not respond to the allegations prior to publication of this story. But in an email, obtained by LFT through a FOIA request, Stone mentioned to inspectors that he was struggling with ramifications from the COVID-19 pandemic.

“This coronavirus is really challenging us, as it is everyone else, so if you have any special requirements or advice during this time, please let us know,” David Stone wrote in the public records document. “We are reviewing our procedures as required and will keep you informed as things change.” 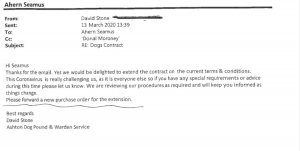 An email from David Stone, owner of Ashton Pound, obtained via FOIA request.

The topic of the pound services has become especially heated recently since renewal or reassignment of the tender — or the official invitation to agencies to bid for the service contract — is coming up this spring and summer for three of the four councils.

Hanging like a guillotine over councillors’ heads, as voiced at recent council meetings, is concern about what options they will have if investigators deem Ashton — the sole contender for services in some recent years — unfit for continued services.

The South Dublin County Council chose to extend its service contract with Ashton Pound in January. But in light of the investigation, other councillors are demanding accountability — and change. 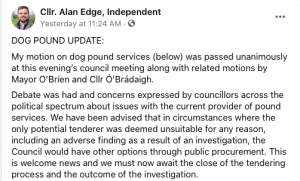 “We need to strive for excellence and ensure that animal welfare is the paramount consideration in determining who should provide this service for the county,” Edge told The Echo, a local Irish newspaper.

Doyle, the Fingal councillor who has raised her voice on other animal welfare issues as well, told Lady Freethinker that the safety and welfare of all animals remains a priority for her.

“I am on record as stating that the physical infrastructure under which dogs at this facility are housed can only be described as ‘Dickensian.’ I say this having physically visited Ashton myself on an unannounced visit,” she told Lady Freethinker. “We have now reached a point where Fingal needs to provide these important services itself, as it will lead to greater oversight and better outcomes.”

The dogs at this Irish pound deserve justice.  The four Dublin councils must take every possible step to ensure immediate and lasting change happens at this pound.