Home » News » Finding Liberty – The Rescue of A Dog with More than A Hundred ScarsBy Libby Kann | October 13, 2018 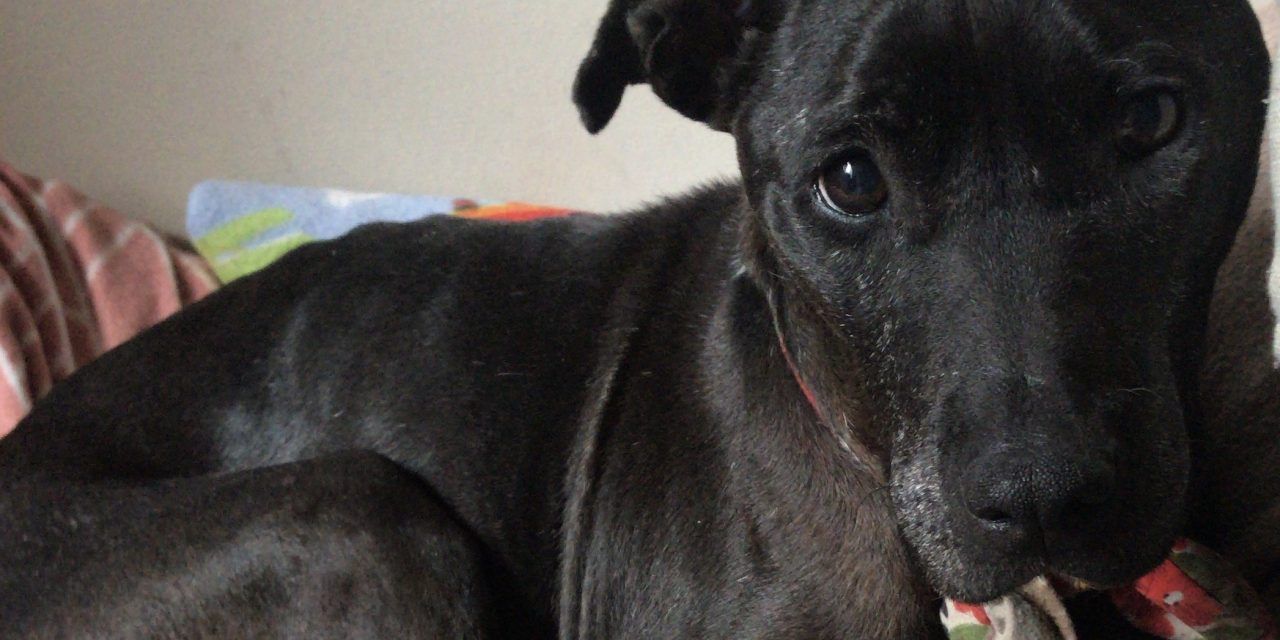 Day One: Liberty is so afraid, her entire body trembles without end.  She has sought refuge in the kitchen corner, where she can clearly see everyone and everything.

Day Two: Liberty has stopped trembling, but is startled very easily by all noise and movement.  She is still unsure about leaving the corner.

Day Three: Liberty left the corner once to drink water, but quickly returned to her hiding place.

Day Four: Liberty is leaving the corner to drink and finally eat!  She is exploring the kitchen more.

Day Five: Liberty is feeling safer.  She slowly walked into the living room and sat in the corner.

Day Six: Liberty made me cry today.  She felt safe enough to rest on the couch next to me.

Day Seven: Liberty is feeling safer with us and others – in the elevator, she sat down on a complete stranger’s shoes.

Liberty…what a name for someone who spent the first thirteen years of their life without freedom. More than a hundred scars cover her frail body, face, and shredded ears. Her tongue droops from her mouth at all times due to her complete lack of teeth – something commonly seen in dogs kept on chains, as they will chew the chain out of boredom and distress, even until they have worn their teeth down to the gums.

When found, she had severe pyometra and broken bones.

According to her pedigree, her life began in Tennessee at Liberty Farm Kennels in the early 2000s.  Years later, her breeders would be found guilty of dogfighting, but not before they sold Liberty to Old Red Kennels.

Old Red also purchased her father, Garner’s Kirby — as in Tom Garner, a breeder whose dogs appear as often as 67 percent in Liberty’s four-generation pedigree, which includes Tom Garner Kennels’ Chinaman.  When asked about her pedigree, Garner replied, “She absolutely looks like one of mine.”

Garner also declared, “You have a well-bred female.”  Since Liberty was “well-bred,” animal rights activists believe she was seen as more valuable for breeding than fighting.  However, females cannot breed forever and especially not at the frail age of thirteen. This led activists to believe that once Liberty was no longer useful as a breeding machine, they found her useful as a bait dog, resulting in her body being broken, scarred and shredded.

When Liberty was still able, it is documented that Old Red forced her to breed repeatedly with her father, Garner’s Kirby; son, Gonzales’ Madball; brother, ORK & Don G’s Bolt; and nephew, BPK’s Rocket.

Many of the dogs in her pedigree have titles that indicate fights lost (1xL) or won (1xW) and more — including many dogs of Garner, who has assured the public several times he does not participate in dogfighting.

According to Tom Garner Kennels’ official website, he is the breeder and owner of a dog named Momo, whose public online pedigree on another site shows a title of 3xW (three fights won).  Momo’s account on this site was created by “admin,” whom the site asks you to contact if there are any mistakes with an account. When asked about the 3xW title attached to his “current stud,” Garner stopped responding.

Other descriptions attached to Liberty’s family include: “winner,” “fighter,” “killer,” “good breeder,” and even dead.

Such as her son, Gonzales’ Madball, who has a title of 1xW and a quote describing how he won his first fight against Reaper’s Kennel Hermano by killing the other dog in the cage in 18 minutes.  The commenters were brazenly proud of this kill.

BPK’s Rocket, Liberty’s nephew, has the same winning title and, according to his pedigree, he won this fight at the international convention in one hour and five minutes against a dog from the ES & MACH Kennels.

Following the pedigree deeper, ES & MACH Kennels appears again in an especially disturbing and heartbreaking quote on the page of Vendetta’s Colo Colo.

“[Translated from Spanish to English] Colo Colo lost to a complete dog from ES & MACH Kennels (Ecuador).  He gave everything he could during an hour and thirty minutes, scratching as a courtesy despite being very damaged…collapsing in the pit and R.I.P. later…THANK YOU TO OUR FRIENDS Luchador, Tico, and Fonse, for entrusting us with this great animal, being in debt to them, Colo gave everything he could and more…forward Team Malobrados.”

This was a heinous crime committed against Colo Colo and he deserves justice.  Unfortunately, that day will likely never come since ES & MACH Kennels are recognized as being located in Ecuador, where the punishment for dogfighting is imprisonment for only one week to one month.

Luchador, thanked for sending Colo Colo to his gruesome death, is the kennel documented as his breeder and also the owner of many of Liberty’s puppies.

A quick online search for the other kennels associated with Luchador resulted in websites containing photos of dogs with bloody wounds covering their faces, descriptions of how they were damaged during organized dogfights, graphic photos and videos of the fights, as well as praise for Sporting Dog Journal.

“The information contained on this website is not intended in any way to endorse or encourage any business, group, or individual to conduct any illegal activities with any animal. Our primary goal is to educate current and future American Pit Bull Terrier owners and breeders. To comprehend both the admirable qualities and the potential drawbacks of this breed it is important to understand the specific qualities for which it was selectively bred. Ignorance is always dangerous, and in this case it is particularly so. While illegal activities are in fact discussed, analyzed, and even counseled in some sections of this magazine, it is always being done with the caveat that one should NOT conduct these activities at all, but “if” they’re going to anyway, then the correct procedures are discussed. The overall thrust of the written material being herein offered for free or for sale is not intended to promote, encourage, or endorse any illegal activity(ies) or to violate the Animal Welfare Acts of 1976 or any state, federal, or local laws either—these activities are merely being discussed on a philosophical level. As such, any information or statements that may appear to endorse any illegal activity, should be viewed simply as our right to express our view under the protection of the 5th Amendment Right to Freedom of Speech and Expression, at the theory level, and should not be viewed as any attempt at promoting, organizing, or encouraging any kind of illegal activity.”

While flags from all over the world cover the GAMEDOG WORLD TOUR bracket (Mexico, The Dominican Republic, Ecuador, Cuba, The United States of America, Belgium, and Australia), even more locations are seen on these public pedigree websites, where hundreds of thousands of dogs are registered.

These sites contain similar disclaimers as the one above. However, the fight titles, violent details, and graphic photos tell a different story.

Thankfully, after over a decade in this violent, yet disclaimed, world of dog fighting, Liberty and 28 other dogs were rescued from convicted dog fighter Claudio Lopez in Santiago, Chile.  This would not have been possible without the valiant efforts of the animal rights activists who found Liberty and brought her into my home.

Here, she will be safe and loved for the rest of her days, although be it with my heart aching for the thousands of other dogs still suffering, unable to find their own liberty.