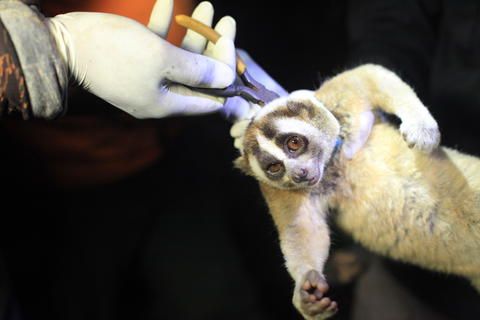 In 2016, police rescued Lilo and Jomblo and brought them to International Animal Rescue (IAR). The vets and staff at IAR worked with them and then released them with radio collars in the Mount Sawal Protected Forest in West Java.

Now, after a period of reintegrating to their natural environment, Lilo and Jomblo’s tracking collars have been removed and they are completely free to live in the wild with other Javan slow lorises.

The illegal pet trade is a new and significant threat to slow loris populations. In 2009, a video of a pygmy slow loris being tickled was uploaded to YouTube. It garnered a lot of attention. Since the posting, researchers have linked “slow loris” tickling videos with increased demand to keep slow lorises as pets.

But despite the incredible cuteness of slow lorises, keeping one as a pet is illegal and cruel. They are one of the rarest mammals. In the wild, they often travel great distances and prefer to keep a large home range of up to 2 square miles. One single slow loris may sleep in up to 60 places. But traffickers or traders rip them from their habitats and send them to live in cages or in homes as pets.

Many slow lorises in captivity are not fed appropriately as they are deprived the opportunity to forage and hunt as they would in their natural habitat. Prior to being sold, slow lorises’ teeth are often cruelly ripped out with no anesthetic as they are the world’s only poisonous primate.

The story of Lilo and Jomblo’s rehabilitation is heartening; but sadly, many lorises will not be as fortunate. They will have their teeth ripped out and be unable to return to the wild. They will die in transport from their natural habitat to a place where they are to be sold like products. And if the slow loris pet trade continues to grow, some are warning that these animals could be pushed to extinction.