Dutch Artist Vacuums Smog From The Air To Create Jewelry 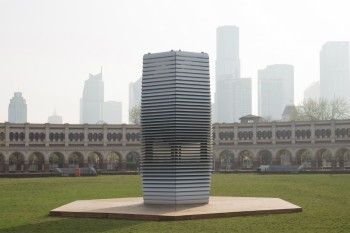 Dutch artist and innovator Daan Roosegaarde combines art and science to develop energy saving inventions as well as air purifying devices. He specializes in merging technology with art. His team of designers and engineers assist him in creating interactive designs that integrate the relationship between people, technology and space.

Roosegaarde is a visionary, designer, and architect on a mission to use natural elements to develop “creations that propel us into the future.” Whenever he discovers an interesting natural phenomenon he ponders how he can utilize it to save energy. Roosegaarde believes in “choonheid” which translates to beauty. Roosegaarde sees beauty in clean energy, clean water, and clean air.

Studio Roosegaard’s Smog Vacuum cleans air in pollution-ridden cities. It’s the world’s first outdoor air cleaner. The tower uses a powerful vacuum and ionization to remove 70 to 80 percent of the smog in the air. The structure is twenty-three feet tall. Roosegaarde says the tower is able to absorb smog from the area equivalent to a football stadium in thirty-six hours. It’s actually a purification process in that the machine ingests smog, dirty particles are strained out, and clean air is outputted from the vents of the tower.

Roosegaarde’s objective is to place the towers all around the world. He built a prototype in Rotterdam in the Netherlands to demonstrate to Beijing officials how it worked and to fine-tune any issues the structure had initially. After building the tower in China, Roosegaarde contracted to construct the next one for India. The Smog Vacuum cleans the air locally. Many would need to be built and installed worldwide to impact the environment on a grand scale. He also wants to convert the tower to solar power and make future towers larger. Roosegaarde says the locals affectionately refer to the tower as the “Clean Air Temple.”

Some of the research for the tower was funded by sales of  Smog Free Rings and Smog Free Cufflinks on Kickstarter. The carbon removed from the air was compressed and set in glass. The jewelry is also meant to increase awareness about the project and the need to de-smog our planet. 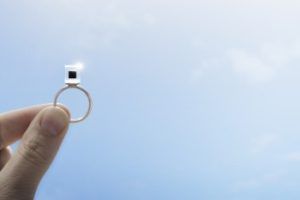 Studio Roosegaarde boasts a portfolio of other brilliant projects that merge art and science. Waterlicht (water light) is a stunning landscape depicting the “power and poetry of water.” It’s comprised of wavy lines of the newest LED technology. The objective of the structure is to demonstrate that water levels will continue to rise if we don’t stop and reverse global warming now. 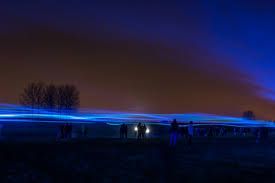 Roosegaarde is fascinated by biomimicry and utilizes principles in nature to create scientific projects. According to Dezeen, Roosegaard’s projects are known for “imitating models and systems found in nature to solve complex design issues” as well as using technology to express poetry.

Roosegaard’s glow-in-the-dark trees can eventually be used to replace streetlights. They were created using bio-luminescent bacteria like that in jellyfish and mushrooms. He’s built a bicycle path that is lit up with luminescent paint on the gravel. The glowing pattern on the path resembles Van Gogh’s Starry Night painting so it’s called the Van Gogh path. The same technology is used in Roosegaard’s pilot Smart Highway. Glowing Lines (the Smart Highway) features photo-luminescent paint on the edges of the road. There’s also Windlicht (wind light). It uses a line of green light to connect blades of windmills to other windmills’ blades.

Another innovative project is his smog-absorbing bikes. Smog is sucked into the bike as it is pedaled and later released as fresh air that’s blown into the rider’s face. China has a large bike share rental program so this initiative would help purify the air. 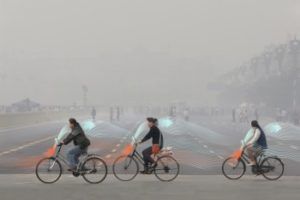 Another interesting innovation is the Sustainable Dance Floor. The electricity created by dancing is used to light up the floor. 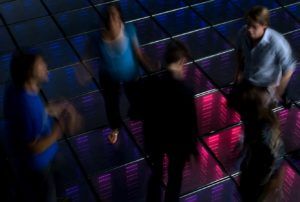 Roosegaarde’s next project is to tackle space debris. He enjoys researching problems, proposing solutions, and drawing attention to important issues. Roosegaarde says he likes to pioneer problem solving and not wait for governments or anyone else to find a solution. Roosegaard’s technological future looks as luminescent as his light projects, and that’s great news for planet Earth.