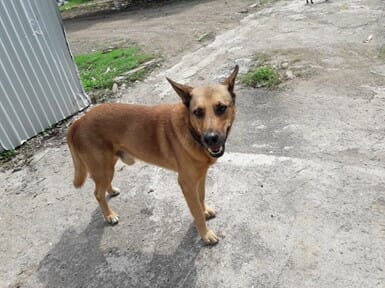 I was asked to help re-home a dog who, through no fault of his own, had found himself in desperate straits.

His owner had died without making arrangements for anyone to take him in. And the dog, named Fattis, had stayed there at the house with a caretaker who fed him until the house was sold.

When the caretaker had to leave, the property was boarded up and poor Fattis was trapped inside. His only food was occasional scraps thrown to him by construction workers. Things looked very bad for him, and I prayed that someone would see him and take pity on him.

Flashback to 2011: a friend adopted a tiny black puppy. She had gone to the shelter with a totally different purpose in mind, but her eye caught this little waif, who was about to be put down because her litter-mates had parvovirus, although she herself had tested negative. 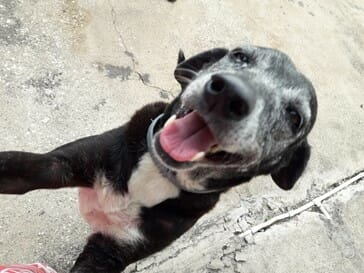 Try as she might, my friend could not leave without the puppy.

She cared for the pup, but could no longer keep her. As luck would have it, the perfect home turned up. And the dog went to live with a lady who adored her and gave her a very comfortable life.

Fast forward 9 years: a young man saw the photo of Fattis and called to ask about adopting him.

Unbelievably, the young man turned out to be the grandson of the very same lady who adopted the little black puppy all that time ago, having recently returned to Jamaica to look after her.

The ‘little black puppy’ is now getting on in years. But she is still fit and healthy, and has welcomed her new friend with open paws — and a big smile.

Now, they are all one happy family.

The circle of life has been completed in the most beautiful way.