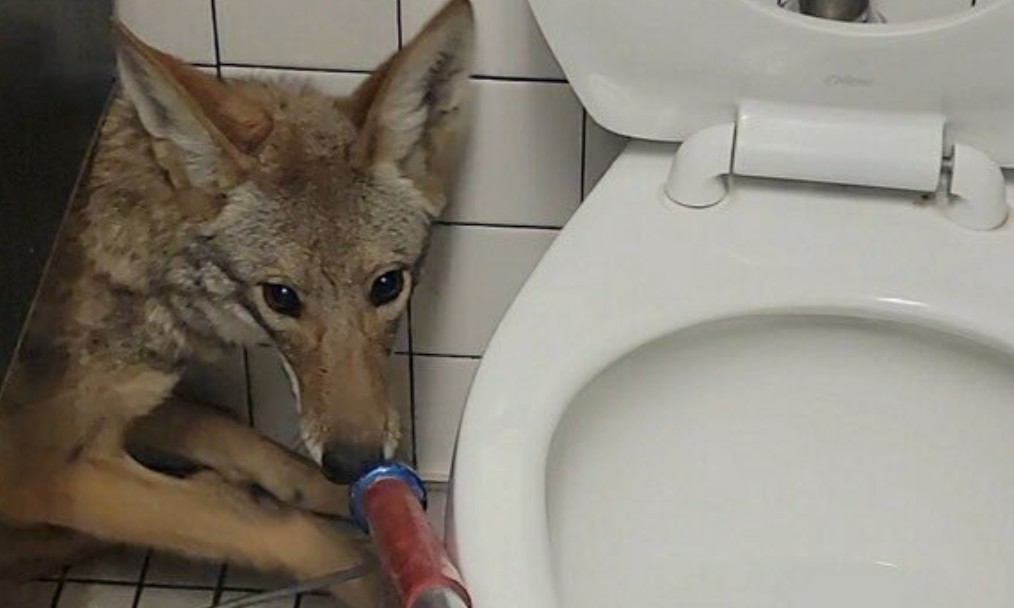 A young male coyote bounded frantically to freedom after a caring animal control officer relocated him from a bathroom stall in a California middle school, People reported.

Riverside County Department of Animal Services (RCDAS) received a call from the Jurupa Unified’s Mission Middle School shortly after 9 a.m. one morning, which reported a coyote pup had infiltrated the school and currently was cowering in a bathroom stall.

Animal Care Officer Will Luna arrived on scene and learned it wasn’t the coyote’s first appearance near the school, with staff dubbing him “Wile E” — a nod to the wily coyote in a popular children’s cartoon.

While many counties nationwide mercilessly persecute coyotes — even going so far as to offer brutal cash bounties for their corpses — Luna took a more compassionate approach.

A video posted by the department shows him approaching the bathroom stall, gently nudging the door open, then talking in a low and calming voice to the coyote, who is pressed as tightly into the wall as he can get.

“Let’s get you out of here,” Luna says, before he lassos the coyote (which isn’t shown in the video) and relocates him to an undeveloped part of the county.

The video picks up with the coyote visible through an open door in the transport vehicle, with Luna encouraging him in the same reassuring voice.

“Come on, man,” he says, as the coyote paces inside the vehicle.

Then, a moment later, after the coyote realizes he can be free and bounds off, Luna cheers.

“Run, run, run!” he can be heard saying, as the camera tracks the quick-moving coyote. “There he is. Free as a bird. I feel better now. My job is done… well, for this call.”


The county department echoed the same even-keeled, compassionate call to co-existence — rather than conflict — in Riverside County that the uplifting video shows.

“There are dedicated wildlife corridors and other open spaces, such as green belts, and these are areas where animals live,” RCDAS said in a press release. “Due to population adjacent to these natural, open spaces, we are going to have encounters.”

The department said they were glad that the relocation went well, without injuries to the coyote, school children, or staff.

“We are pleased that this incident was smooth and all the children were ok and we were able to get the coyote back to (his) more natural habitat,” RCDAS Director Erin Gettis said.

Compassionate co-existence can’t be a choice: We must find a way as a species to share this beautiful planet with the other sentient beings that call Earth home.

Lady Freethinker applauds Animal Control Officer Luna for his kind and humane handling of this terrified coyote and the Riverside County Department of Animal Services for their decision to relocate, rather than kill, the innocent animal in this case.