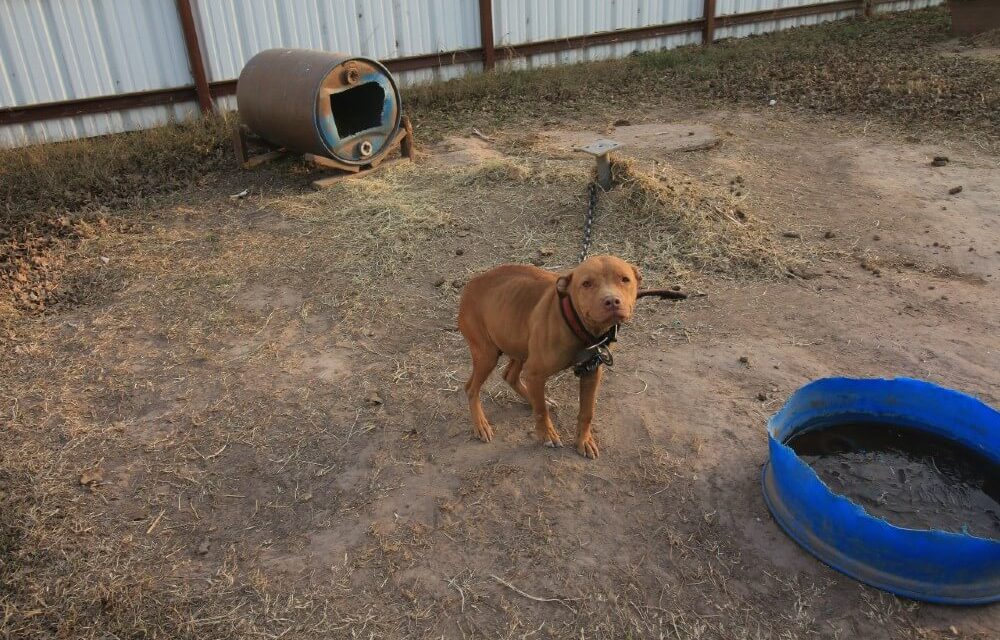 A controversial kennel owner in Mansfield, Texas,  cited recently for multiple violations of the state’s new tethering law, is now the subject of both state and local investigations.

In addition to complaints about the chained dogs, concerned members of the public have also alleged that illegal breeding, dog fighting, and animal maltreatment is happening at the property to state and local officials, according to public records documents obtained by Lady Freethinker (LFT) via public records request.

But both agencies have identified issues at the property, with public records documents showing multiple charges forwarded to a prosecutor and citations issued from the respective offices. The Humane Society of North Texas, which has a standing partnership with JCSO, also had an open case at the property as of June 8.

Scott spoke briefly with LFT and denied all allegations against him.

While the pending investigations leave open questions about Quiet Boys Kennel, the situation also highlights limitations in Texas animal cruelty statutes that are hampering what enforcement agencies can do, officials who spoke with LFT said. 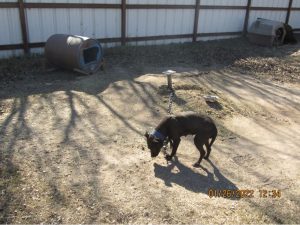 Allegations of Abuse and Violations of Law at Quiet Boys Kennel

Quiet Boys Kennel has been a cause of local concern since at least January, when several activists started taking photos and videos from nearby vantage points, posting on social media, and sending documentation to the local sheriff.

JCSO’s Chief Deputy James Saulter told LFT he has been been receiving “30 messages a day” about the property. 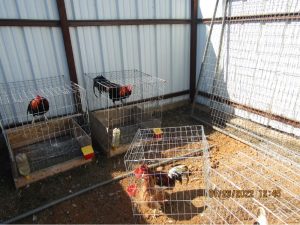 The Texas Department of Licensing and Regulation (TDLR), which oversees breeders within the state, also has received numerous complaints alleging dogfighting, cockfighting, illegal breeding, dogs punched and slammed to the ground, chaining violations, and neglect via inadequate shelter, food, and water, according to the public records documents.

Scott said the complaints against him amounted to “harassment.”

“They’re not going to run me off or scare me, and that’s the end of it,” he said. “They just don’t want them (the dogs) outside, and you can’t tell me how to keep my dogs. It’s not a law. It’s an opinion. They’re trying to force their opinions on me.”

Photos taken by JCSO deputies of Quiet Boys Kennel in January, obtained by LFT via a public records request, show a large yard with dogs tethered by heavy chains near an assortment of structures, including barrel-shaped objects with jagged rectangular holes cut into the fronts.

In one photo, the vertebrae of a dog’s spine are visible. Another photo shows old scarring on a dog, as corroborated by deputy reports. 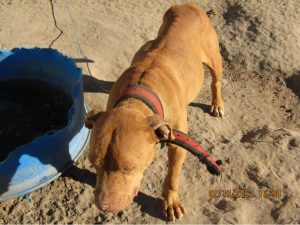 The photos also show a number of water receptacles, some overturned and some that contain a thick brown liquid sludge.

The deputy documented “approximately eight dogs” still tethered by chains and reported Scott was unable to produce rabies vaccination records for 20 dogs on the property. Scott also said he did not meet the legal requirements to run a “shelter,” according to the deputy’s report.

Scott had told both local law enforcement and state investigators that the dogs on his property were “unwanted” or “rescue” dogs respectively, according to public records documents. The JCSO deputy who inspected the property told Scott in response that impounding or taking in unwanted animals would legally qualify as a “shelter,” with required animal control officer training and at least an annual veterinary visit. 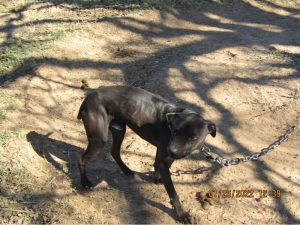 “Scott advised he has not had that training nor has he had a Veterinarian come to the address as that would cost 40 – 50 dollars an animal,” the deputy notes in his report. 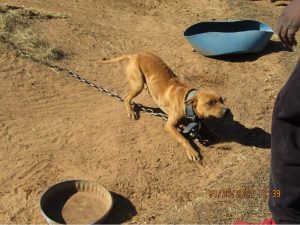 Scott and his associate also faced four counts and two counts, respectively, for failure to vaccinate for rabies. The charges were dismissed after the couple produced vaccination records, although fines remain, according to court records.

“Ordinarily, we give folks a bit of time to get into compliance,” he said. “We didn’t cite him for everything we could have, because no one could pay for all the things we could have cited him for, and that’s not how we treat our folks. I’m not going to give a citation for every dog on a chain.”

Saulter said his office has received “hundreds upon hundreds of calls” about alleged dog fighting at the property.

“Do I believe he has something to do with dog fighting?” he said. “Yes, I do. But I have no proof. And I am 99.9 percent sure that if it’s happening, it’s not happening on that property. If you want to figure out where the dog fighting is happening, and it’s in our county, then we will go out and arrest everyone there.” 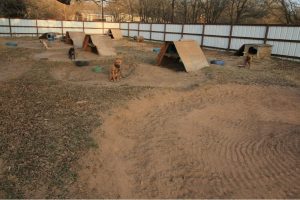 At least some of the dogs in those photos, obtained by public records request, are still standing by overturned bowls or containers filled with a small amount of brown-colored liquid.

During a call on June 6, Saulter – the sheriff’s chief deputy – said the number of dogs on the property was down to “four.”  The Humane Society inspector who spoke with LFT following a June 7 welfare check said, “There are more than four dogs on the property, but it does appear that dogs have been moved.”

Public records documents show Scott had given three dogs away to undisclosed locations and also had shot a dog to death following a dog fight at the property.

Saulter told LFT he was not aware of where the other dogs had gone. 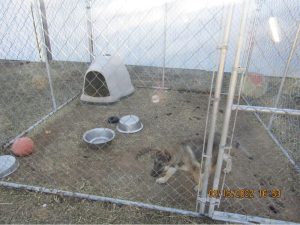 “That’s none of your business, and it’s none of their business,” Scott said. “These are my dogs, and I can do whatever I want with them. And that’s that.”

Both the state licensing department and the Humane Society of North Texas had open investigations regarding conditions at Quiet Boys Kennel as of June 8.

The TDLR investigator told LFT that she had forwarded six charges onto a prosecutor for evaluation, as of the beginning of June. She was not able to provide additional details, citing the open investigation.

The Humane Society investigator who inspected Scott’s property on June 7 said there was no evidence of cockfighting, with a sole rooster on the property who was not demonstrating any of the classic signs, but that he had identified other issues.

“The case is still active,” he said. “There were some issues, and I will be conducting a follow up inspection.” 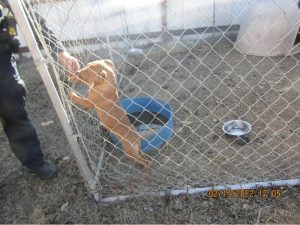 JCSO and the Humane Society investigator said that Scott has cooperated with their investigations to date, while public records show that Scott refused access to his property without a warrant to the state inspector.

In speaking with LFT, officials pointed to limitations in state law when it comes to possible illegal breeding, animal cruelty or neglect.

Texas law defines a breeder as an individual who has 11 adult female dogs capable of reproducing or an individual who sells or offers to sell 20 or more dogs or cats in a single calendar year, the TDLR investigator said. She added that there “is no indication that Quiet Boys has 11 female breeders or is selling 25 dogs per year.” 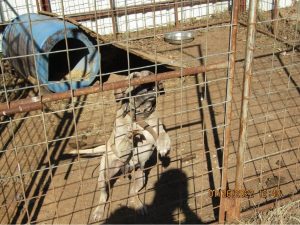 Both JCSO and the Humane Society of North Texas pointed to the broad language of Texas animal cruelty statutes, saying they can only take enforcement action as allowed by that law.

“The new laws don’t fix everything,” Saulter said. “It gets dogs off a chain and onto a tether. It still limits what we can do. We can only go by the state law, so it handcuffs us.” 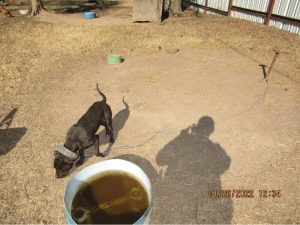 Both JCSO and the Humane Society of North Texas told LFT that their preferred approach toward identified issues is to first educate owners and give them time to come into compliance, followed by penalties for additional violations.

“This man (Scott) has allowed us to go on his property,” Saulter said. “He has not made us get a warrant. At some point, it becomes harassment on our part if we keep going out there.”

Lady Freethinker encourages the investigators in this case to continue to evaluate any new evidence or allegations that come to light and to continue to conduct site inspections as long as animals could possibly be in danger.

Checking into possible or alleged animal cruelty is not harassment. It’s the law. And it’s no less than these innocent animals deserve. 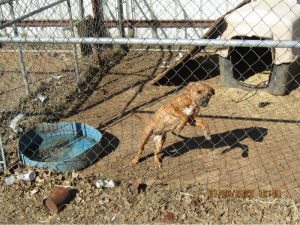