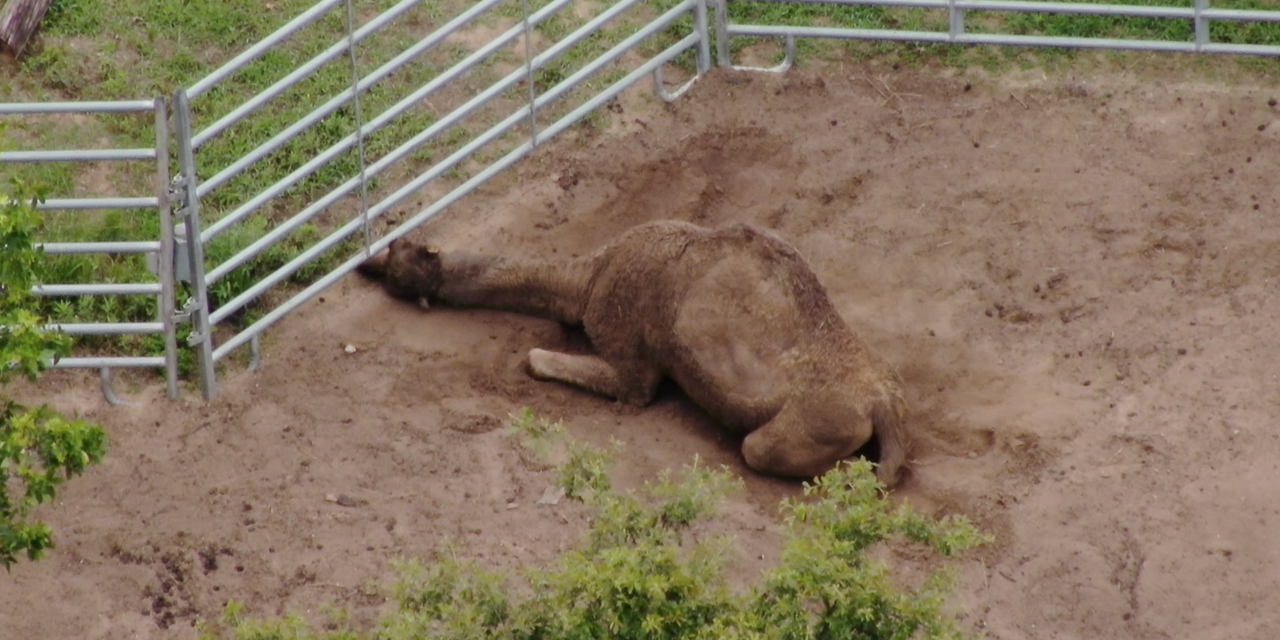 An animal welfare nonprofit is concerned about animals left behind at a Tiger King Park, including this camel (Courtesy SHARK)

Conditions for animals left behind at an infamous “Tiger King” park in Oklahoma following a federal raid has an animal welfare nonprofit raising the alarm about potential, continued abuse.

Nonprofit Showing Animals Compassion and Respect (SHARK) used a drone to capture footage of the animal park, located in Thackerville, following a federal raid that removed more than 60 big cats from the property in May.

“There were still quite a few animals there, and they were not getting adequate and proper care,” SHARK President Steve Hindi told KTNV.

Animal residents left behind following the raid included a camel, a burro, wolves, primates, ponies, lemurs, emus, goats and bobcats, among others, according to SHARK.

The nonprofit had started documenting conditions in December, with multiple trips over months to the zoo that captured animals allegedly being fed putrid food, animals on the brink of starvation, and piles of garbage and carcasses around the property, according to a SHARK newsletter about their findings.

SHARK was particularly concerned about a camel spotted stretching his head under the bars of his enclosure to reach greenery on the other side, Hindi told KTNV.

Jeffrey Lowe — who took over control of the exotic animal park featured in the controversial Netflix documentary “Tiger King” — declined a request from Lady Freethinker (LFT) to respond to allegations of unsanitary conditions, animal abuse, and environmental contamination.

“Mind your own business,” the zoo said via its Facebook page.

That statement conflicts with numerous observations from USDA inspectors included in the search warrant that authorized the federal raid of the property, with inspectors stating that two big cats had died “under suspicious circumstances” and that at least three big cats under the age of one died “as a result of malnutrition.”

Notes from USDA inspectors also noted conditions had declined at the zoo since a February inspection, with 16 big cats observed to be “underweight to thin,”  a “strong stench of rotting animals,” and “a refrigeration truck covered in flies, likely filled with putrid meat”  — unsanitary conditions that constituted harassment under the Endangered Species Act, according to the search warrant document.

In May, officials from the U.S. Fish and Wildlife and the U.S. Department of Agriculture (USDA) acted on reports of numerous violations of the Endangered Species Act, as documented in USDA inspection reports, and seized 68  lions, tigers, lion-tiger hybrids, and a jaguar from the Thackerville animal park.

A plea deal in 2018 had put Lowe on probation, rather than in jail, after a judge found him guilty of illegally exhibiting exotic animals — including profiting from public photo opportunities with tiger cubs offered in Las Vegas neighborhoods. As part of that deal, Lowe had agreed to provide proper care for his animals.

“With our drones, we were able to identify some of the bottles in the dump sites,” a SHARK investigator told LFT.

The Oklahoma Department of Environmental Quality (DEQ), responsible for protecting air, food, and soil, and biota from pollution, has received four complaints about the property, said Spokesperson Erin Hatfield.

Two of those complaints are still under investigation and could not be released. A public records request for the other two incidents revealed claims that animal carcasses and trash were being burned openly in a pit on the property.

A DEQ investigation in June could not confirm that the alleged open burning was happening, but notes from the reports also noted that “open burning had probably occurred on this site in the past” and that Lowe and the property’s owner, Cheryl Scott, “seemed to not be aware open burning of waste from the Tiger King Operation was not allowed.”

The investigator also noted in the case report that while she did not identify any burned animal carcasses on property, she “was informed that animal carcasses had been remove [sic] and disposed.”

The department issued an open burning warning letter to Scott given that “illegal open burning probably occurred” at the site, according to the letter.

Hatfield said the agency only issues fines for violations that are “egregious” or continued violations.

“At this point, the violations will not incur fines as long as proper measures are completed as agreed upon,” she said via email.

Lowe also is facing a public nuisance complaint filed against him by the Love County Sheriff’s Office and four warrants for his arrest in Las Vegas Municipal Court — three for not having the proper license or permit for wild animals and one for doing business without a license — according to KXII.

A SHARK investigator told LFT that the organization’s last check on the animals showed that Lowe was clearing them out, with groups concerned the animals will go to “the highest bidder.”

“We had organizations willing to take the remaining animals, but the authorities would not release them, nor will they ensure their safety,” the investigator said via email.

SHARK has been in contact with the USDA without results to date, the investigator added.

The organization said people can help make a difference for animals by reaching out to the Association of Zoos and Aquariums at 301-562-0777 and asking them to take action to help the animals. They also can mail written correspondence to the zoo at 8403 Colesville Road, Suite 710, Silver Spring, MD 20910-3314.