Tribes Are Restoring Lynx From Canada, Where They’re Trapped for Fur, to WA, Where They Will Be Protected

Home » Animals » Tribes Are Restoring Lynx From Canada, Where They’re Trapped for Fur, to WA, Where They Will Be ProtectedBy Lex Talamo | March 9, 2022 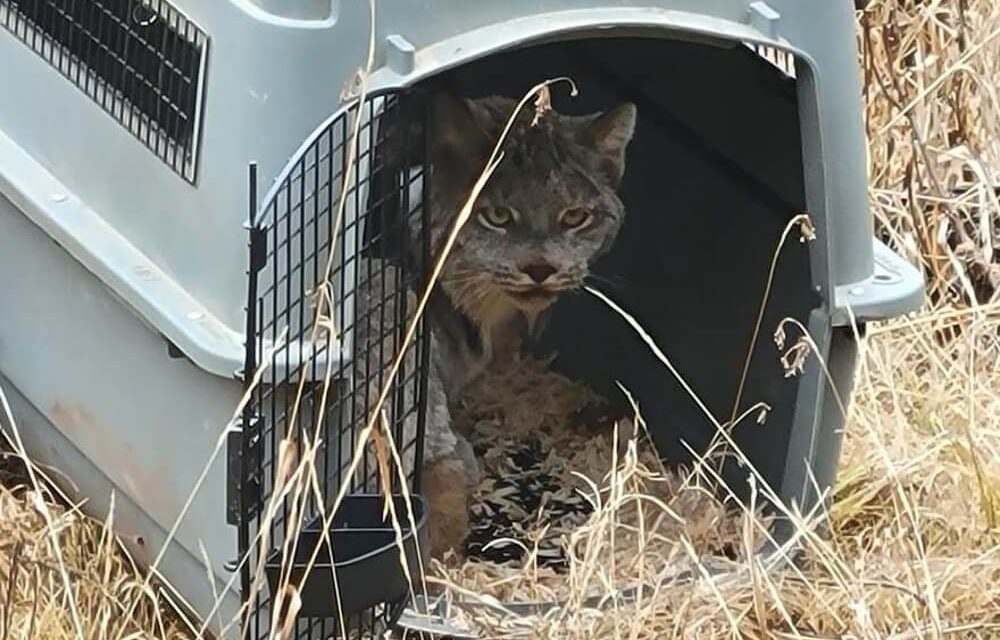 (Photo Courtesy Of The Colville Tribe Department Of Fish And Wildlife)

A multi-agency partnership with the Confederated Tribes of the Colville Reservation is restoring vulnerable lynx from Canada, where they’re hunted and trapped for their fur, to Washington State, where they will enjoy federal protections.

The Northern or Eurasian Lynx, known as wápupxn in Okanagan, historically roamed forests in Eastern Washington, but their populations took a hit following years of serious wildfires, logging, and overtrapping.

The Colville Tribes, encompassing 12 unique tribes within the reservation’s 1.4 million acres, saw an opportunity for an innovative program to restore the species to Washington State, where they are considered “endangered” and will be covered by the Endangered Species Act (ESA), said Rose Piccinini, a wildlife biologist with the Colville Tribes who is spearheading the restoration efforts.

“The tribe is just so grateful to be able to be the ones to bring these animals back and to right a wrong and have them back in the landscape where they belong,” she told Spokane Public Radio.

That sentiment was echoed by Jarred-Michael Erickson, a tribal council member and biologist who praised the project.

“It’s getting these rare forest carnivores back on the landscape, righting a wrong that was done,” Erickson told Inlander. “There’s a place for every animal in the ecosystem.”

The first transports started this winter, with the project’s collaborators studying and using the most humane methods possible, according to NWPB.  Lynx are live-trapped in British Columbia, radio-collared and tagged while sedated, and then released to the Kettle Range, in north central Washington, within about 24 hours of being removed from the traps. A veterinarian monitors their health throughout the process, the Gazette-Tribune reported.

One of the Tribes’ wildlife technicians also has named two of the released lynx “Grandfather” and “Grandmother” out of respect for the species, Piccinini told Inlander.

“That’s so fitting, honoring all of the lynx that came before,” she said. “You’re also sort of preparing for this new generation back on the reservation.”

As of mid-February, the partnership had safely relocated nine lynx – five females and four males – to Washington’s snow-covered forests in progress that Piccinini celebrated.

“When I think about what we’ve already accomplished this year, it’s sort of mindblowing,” she told Inlander. “We have lynx on the ground in the Kettles, and to me that’s already been a success.”

The goal is to establish a breeding population by relocating ten lynx each year for the next five years, for 50 total lynx. Officials plan to track the animals’ locations via the collars twice per day for up to four years to see how they fare with land management, climate change, wildfires and finding food sources in their new homes.

The Colville Tribes have a long history of restoring species, including elk, sharp-tailed grouse, and bighorn sheep. Part of that legacy includes educating the public about re-introduced species and the protections they need.

A public notice posted recently by the Tribes explains that the Endangered Species Act prohibits the “take” of the released lynx – a term which encompasses harassment, pursuit, hunting, trapping, wounding, killing, capturing, collecting, otherwise harming, or trading of the animals’ parts – and also includes provisions to preserve the habitat they need to thrive.

“With the return of this species comes the responsibility of all resource users to ensure their protection,” the Colville Tribes wrote in a posted public notice.

The notice also depicts the differences between lynx and resident bobcats, which they resemble, noting that lynx have arched backs, longer ear tufts, longer legs, a gray uniform coat and shorter, black-tipped tails.

“If there is a question of what species it is, please always err on the side of caution and leave the cat undisturbed,” the notice says.

Other partners in the project include the U.S. Fish and Wildlife Service (USFWS), the U.S. Department of Agriculture, the First Nations that is a part of the Okanagan Nation Alliance, and the British Columbia Government.  Grants from USFWS and the Bureau of Indian Affairs are also assisting the partnership’s efforts. 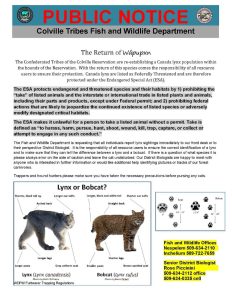 (Photo Courtesy Of The Colville Tribe Department Of Fish And Wildlife)