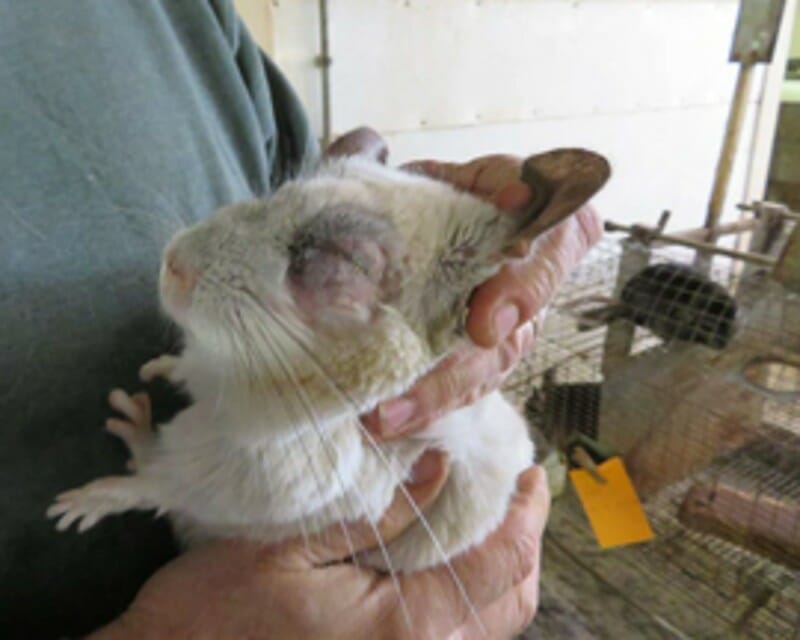 A chinchilla breeder with hundreds of violations under the Animal Welfare Act had his license permanently revoked and was issued an $18,000 penalty leveraged by a United States Department of Agriculture (USDA) judge who declared him “unfit.”

The Oct. 8 administrative hearing involving Dan Moulton, owner of Minnesota-based Moulton Chinchilla Ranch (MCR), followed an undercover investigation by People for the Ethical Treatment of Animals (PETA), dogged documentation of violations spanning almost a decade via Freedom of Information requests filed by the Animal Welfare Institute (AWI), and a 2018 complaint filed by the USDA — the most severe enforcement step the federal agency can take, which can lead to a hearing and a revoked license.

Moulton did not respond to Lady Freethinker inquiries prior to publication of this story.

The investigations and USDA inspection reports and photos showed animals with pus-filled eyes crusted shut, protruding bones, bloody limbs, and too-tight collars embedded in their necks. Inspectors also reported animals without access to clean food or water, a fly infestation, and an excessive buildup of waste in the enclosures — including dead animals, in some instances.

The 18-page USDA complaint cited Moulton for failing to provide inspectors with adequate access to the property and noted 85 animals had gone without needed medical care between September 2014 and May 2017 — including animals with untreated growths, weeping wounds and sores, and crusted eyes. 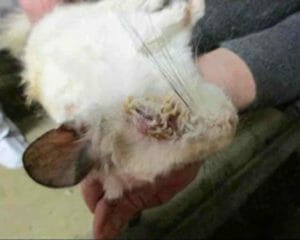 “You are unfit to be a licensee,” Clifton said during the teleconference hearing. “I do not know why you have been unable to understand the requirements of the Animal Welfare Act. I believe it is more from disinterest than anything else.”

Moulton, during his opening argument during the hearing, said that he had made improvements to his facility, enlisted the assistance of at least seven veterinarians, and that his ranch “does not generate large sums of revenue.”

Moulton also alleged during the hearing that USDA inspectors “lacked knowledge, training, and experience regarding chinchillas.”

He also told National Geographic that his animals receive good care and regular visits. In video footage, Moulton also reported to a USDA inspector that he spent about 45 minutes a day — caring for hundreds of animals — and that he rarely hired outside help.

The oral order from the bench is only the second one that the USDA has executed, and also the first animal welfare case involving research animals that the agency has brought forth in the last six years, AWI Researcher Eric Kleiman said.

“It shocks the conscience that for years and years, the USDA allowed what it called ‘immense, avoidable’ suffering of untold numbers of chinchillas at Moulton,” Kleiman said. “These animals should have been seized years ago.”

PETA’s undercover investigator, who worked at the ranch from October 2020 to January 2021, submitted evidence of conditions to the judge and to the USDA, allowing for the Fillmore County Sheriff’s Office to launch a criminal investigation, according to KTTC.

That investigation showed animals with open wounds with exposed bones and untreated injuries, according to PETA. The animal welfare nonprofit also reported that Moulton had supplied major universities in Arizona, Colorado, Maryland, and Miami with chinchillas for research experiments, as well as shipped the animals overseas to Germany, Canada, and China.

State and local law enforcement failed to act on local animal cruelty provisions despite the documented violations, AWI said. Local prosecutors decided not to pursue animal cruelty charges in August, given the pending federal hearing, according to National Geographic. 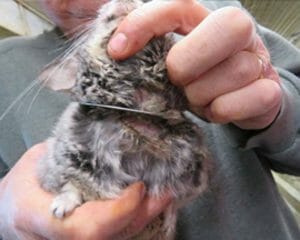 Crusty scabs and open sore under chin around collar that is too tight (Photo Credit USDA, via FOI request from Animal Welfare Institute)

The American Association for Laboratory Animal Science listed MCR as the only USDA-licensed breeder supplying chinchillas for research. Researchers most frequently use the small animals, native to the Andes, in experiments related to human hearing.

The USDA reported 1,250 chinchillas endured experiments in 2019, the year for which data was most recently available. While there are 85 other USDA-licensed dealers who breed chinchillas, none reportedly do so solely for research, according to National Geographic.

Kleiman said that federal laws must be upheld, and licensees must be held accountable.

“If licensees can continue to operate despite such flagrant violations of the law, then the license holds no meaning,” he said. “The research industry must be held accountable for turning a blind eye to dealers cited over and over by USDA inspectors for such appalling treatment.”

While some researchers have said they likely will shift to using guinea pigs in their research, other scientists have said that it’s time to rely on more accurate and more humane models — including models of the human ear using human cells and tissues. 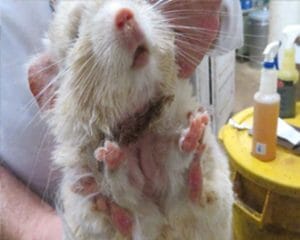