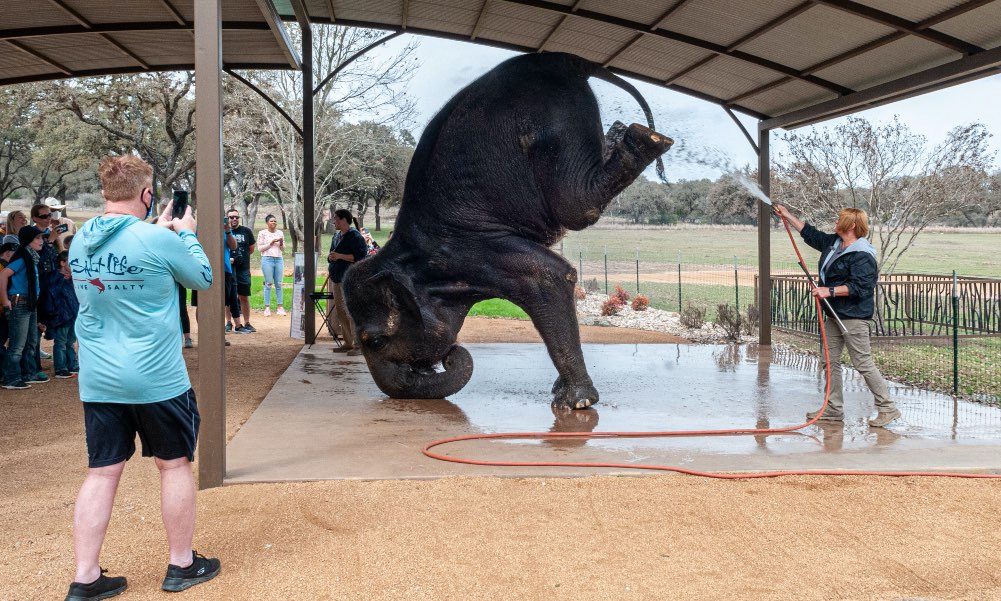 Elephant at The Preserve (Photo Credit: In Defense of Animals)

A newly released listing of the “10 Worst Zoos for Elephants in North America” has prompted celebrities Ricky Gervais and Moby to join the call for the release of elephants held in captivity.

The report by nonprofit In Defense of Animals (IDA) considered physical suffering of elephants as well as indicators of psychological harm caused from a captive, unnatural and painful life at accredited zoos considered to be among the “best,” according to IDA’s press release.

Conditions for elephants at the zoos included an elephant kept in “solitary confinement” — or without access to other elephants —for 15 years, and zoos that used vicious bull hooks to control elephants, kept the animals in small spaces, and allowed free contact between the public and the elephants in spite of widely considered best practices, according to IDA.

The report also draws attention to scientific research showing that elephants living in unnatural and barren captive environments can suffer actual physical damage to their brains. Elephant researcher Bob Jacobs, a professor at Colorado College and lead author of the study, emphasized “the vast gap between the rich environment nature provides for elephants’ thoughtful brains versus zoo captivity.”

“Whether it is the 10 Worst Zoos or the ten best, all zoos are detrimental to elephants’ brains and cause physical and mental suffering,” Jacobs wrote.

Renowned comedian Ricky Gervais and multiplatinum-selling recording artist Moby since have called for an end to holding elephants captive in zoos.

“Elephants are sensitive, emotional, and highly intelligent beings — seeing them suffer mentally and physically behind bars is heartbreaking,” Gervais said.

“I always felt bad seeing sad animals in zoos, but I had no idea that zoos cause brain damage to elephants,” Moby said. “The list of 10 Worst Zoos for Elephants is a shocking alarm call exposing how elephants are suffering and dying.”

Elephants in all zoos can suffer from isolation, inadequate space, premature deaths and captivity-caused illnesses such as zoochosis, which is stress-induced and indicates elephants are frustrated in their inadequate captive environment, the report states. Zoochosis has never been observed in wild elephants, IDA added.

“Year after year, our research finds more ways elephants suffer in zoos,” said IDA President Marylin Kroplick. “Zoos imprison elephants for nothing more than profit and entertainment, which is unforgivable. We call on all zoos to commit to phasing out their exhibits and sending their elephants to accredited sanctuaries where they can live a much more natural life.”

The worst zoo in 2021 was Edmonton Valley Zoo in Edmonton, Alberta, Canada, according to IDAs’ report. The zoo has held female Asian elephant Lucy in solitary confinement for the past 15 years.

Here is the full 2021 list of the worst North American zoos for elephants, according to IDA:

Adding to the list of 10, In Defense of Animals also placed The Preserve, in Fredericksburg, Texas, in its Hall of Shame and gave a dishonorable mention to Oregon Zoo, in Portland, Oregon.