Home » Animals » Cat Missing for Six Years Is Back with Her Family After Tearful ReunionBy Joe Taglieri | September 22, 2022 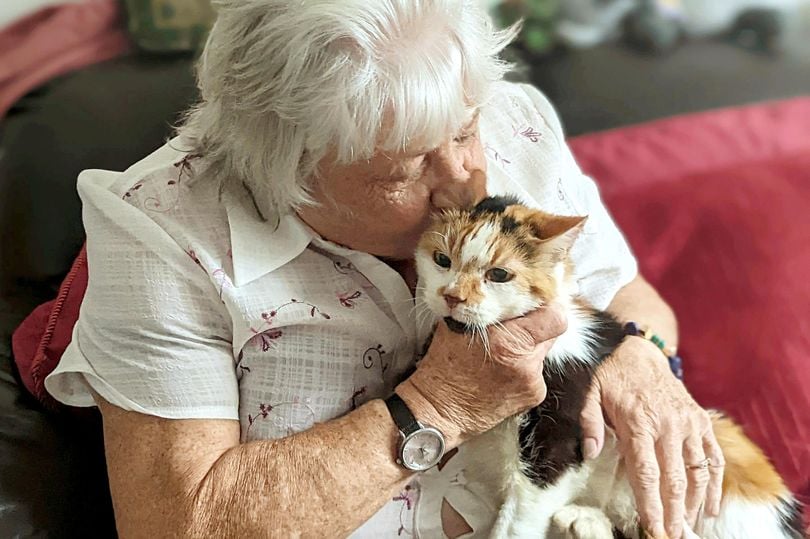 A beloved cat in England missing for six heartbreaking years was reunited with her adoring guardians thanks to pet microchip technology and a caring rescue.

Georgie was a house cat who never ventured outside until one day she ran out through a window, Metro reported. Her guardians, Pauline, 78, and Trevor, 81, searched high and low for her to no avail.

After eventually coming to terms with the loss of Georgie — even putting up a memorial plaque in their missing cat’s honor — the Robinsons got a very pleasant surprise in the form of a call from the Royal Society for the Prevention of Cruelty to Animals (RSPCA) that Georgie had been found, according to Cambridgeshire Live.

The cat was living just 500 yards away — right around the corner — and in somewhat bad shape, reportedly suffering from malnourishment, a flea infection and an open sore on her mouth.

But now after reuniting with her family, 14-year-old Georgie is settling back home and getting to know the couple’s two other cats, Charlie and Sabrina, and rescue dog Bree, Cambridge Live reported.

“She went straight onto my knee as if she hadn’t been away — I had a few tears I must admit,” Pauline said. “The RSPCA has been tip-top and it does show that microchipping works.”

The long-missing feline’s reunion with her family “demonstrates the importance of getting cats microchipped,” said RSPCA inspector John Lawson, who led the rescue effort after concerned area residents reported Georgie’s plight. “Georgie would not have been reunited with her owners without one.”

We are so grateful that Georgie is safely home! Her story is a good reminder of the dangers that companion cats face outdoors, and we encourage our readers to only allow their feline companions outdoors if directly supervised.