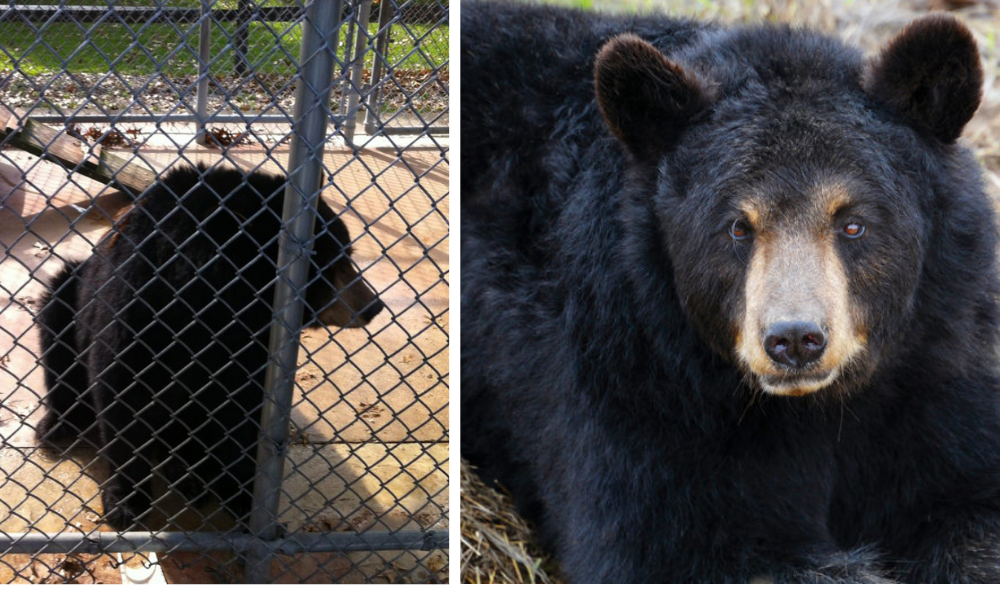 Photo of Ricki in captivity in Pennsylvania (left) vs. at an animal sanctuary in Colorado (right). Images via Animal Legal Defense Fund.

Several years ago, Ricki the wild black bear was living inside a 250-square-foot concrete enclosure outside an ice cream shop in Pennsylvania.

She could walk a total of 12 steps from one end of the barren space to the other. Her only stimulation happened when visitors, for a quarter, purchased a handful of dog food and corn from a gumball machine nearby and tossed it at her.

Bears in the wild roam up to thousands of miles in their “home” territories, swim, play, make dens, climb, dig, explore, and forage for nuts, grains, and berries — none of which Ricki could do.

But she lived in these conditions for 16 years — suffering from a “slow and torturous decline in physical and mental health,” according to a veterinarian who examined her — until a woman saw Ricki’s misery and reported her suffering to the Animal Legal Defense Fund (ALDF), which stepped into court on her behalf.

Ricki now lives on a 15-acre sanctuary in Colorado. But sadly, her story of brutal treatment is not unique.

Morgan Pattan, the lead researcher for a study on ursine suffering published in the Animal and Natural Resource Law Review, estimated that 2,000 captive bears currently dwell in USDA-licensed facilities and roadside zoos.

Pattan found that many facilities keep the wild bears in barren, concrete enclosures with inadequate space and poor practices — such as feeding dry dog food to the bears.

“The general public is becoming more aware of the exploitation of captive big cats and elephants, yet they are not as aware of the problems that bears face in captivity,” Pattan said during a presentation of her findings, hosted by ALDF.  “It is nearly impossible to replicate the natural behaviors that bears exhibit in the wild in a manmade enclosure.”

“The regulations of the AWA include standards that must be met by all regulated facilities with bears,” Bell said. “The USDA enforces those standards.”

But the standards within the AWA are a big part of the problem for bears, Pattan alleged. The animals are covered by subpart F, which sets only minimum standards for food, water, sanitation and enclosure space, she said.

Bears in the wild spend about 75 percent of their time foraging for food, covering a range from a few to thousands of miles.

They spend the remaining time performing various activities, from “denning” — or creating elaborate hibernation nests — to climbing, digging, and playing. Mama bears also have the important task of teaching their young how to survive, in the first one to two years before cubs take off on their own.

But bears in captivity, particularly at roadside zoos, don’t have that freedom. Not even close.

Captive bear enclosures are rarely larger than a couple hundred square feet — the size of an “average living room,” according to Pattan — made of barren concrete flooring with cyclone fencing or bear ‘pits,’ where bears are beneath visitors.

Captive bears often are forced to share the enclosure and have no ability to retreat from other bears or members of the public. They’re sometimes denied veterinary care. And cubs often get snatched prematurely from their mothers at a few weeks old, so they can be used in photo shoots with tourists, Pattan said.

It’s not a coincidence that bears in these conditions start showing symptoms of psychological suffering and stress, from pacing with boredom to becoming aggressive, she added.

The internet is replete with their stories of suffering: from a black bear who spent six years in a 12 foot by 22 foot cage of concrete and chain link, where he was fed dog food on the same floor where he defecated and urinated before a judge ordered his release, to multiple bears kept in concrete pits at the Cherokee Bear Zoo and Chief Saunooke Bear Park in Cherokee, N.C.

“The AWA provides for civil penalties and license suspensions and revocation,” he said. “Also, if animals are found in a state of unrelieved suffering, the AWA provides the USDA authority to confiscate those animals.”

Bell added that the agency had confiscated several bears from a licensed facility this February.

The Saunooke Bear Park also was shut down in 2013, when USDA inspectors responding to an animal rights group’s complaint found the park was “failing to provide the bears with appropriate food, proper veterinary care and a safe enclosure.”

The agency suspended the exhibitors’ license and fined the owners $20,000, according to the Huffington Post — a clear example that a licensed facility doesn’t automatically equate with being a humane one.

“Many zoos do emphasize the physical wellbeing of animals that they exhibit, but research has shown that physical health does not necessarily signal welfare,” Pattan said. “The psychological well-being must be considered of equal importance.”

She pointed to the Accredited Zoos and Sanctuaries, which  has a 137-page manual specific to what captive bears need to thrive given that they are highly intelligent animals.

An example of those standards is having a multi-acre enclosure with a stream and pool stocked with live trout and scattered feeding routines to encourage natural bear behaviors, Pattan said. Another example is not allowing members of the public to handle bear cubs, she added.

Pattan then noted that less than 10 percent of the 2,800 exhibitors with bears and licensed by the USDA are accredited members.

4 Steps You Can Take To Help Bears In Captivity

People who want to help wild bears held captive in U.S. facilities should get educated about the issues, raise awareness, and contact their legislators, Pattan said.

Some steps people can take to get started: