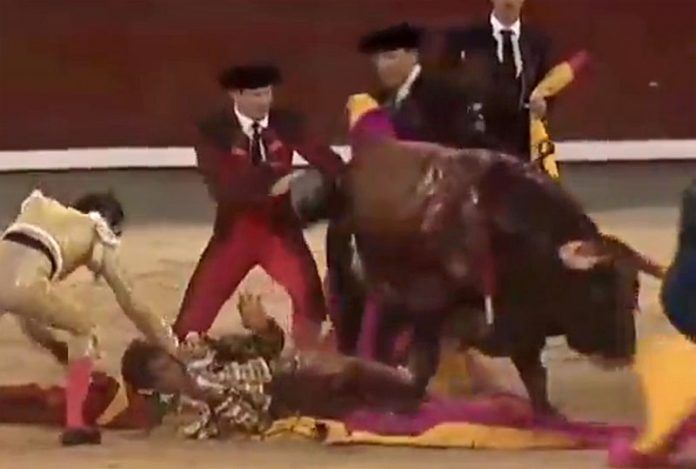 Bullfighting is a barbaric “sport” that most likely originated as part of a fertility rite in the eastern Mediterranean area. Cretan pottery attests to its early origins that date back millennia. Its original regenerative symbolization has degenerated into a useless bloody spectacle that is not only dangerous for the participants, but more exclusively for the agonizing slaughter of innocent bulls.

It is a sport, as one petition points out, that is international in scope in the Old and New Worlds. Sadly it is the Spanish, notwithstanding their magnificent achievements and contributions, who more than other culture, have encouraged these outmoded means of abusing bulls either with a corrida, in the streets, or with some other needless traditional carnage. Over 10,000 poorly treated bulls a year are sent to their slaughter to satiate a bloodthirsty mentality. It all amounts to a disgrace to humanity.

“The tables,” however, “have been turned.” A Spanish newspaper reports that a bullfighter was gored on the opening day of a festival. Just a few days ago in Madrid, Saul Jimenez Fortes was tossed in the air and then dragged on the arena ground since his necktie became entangled in a bull’s horn. The bull was distracted so the wounded matador could be placed out of harm’s way. In a tweet from a hospital he thanked his fans for their good wishes “and God for being by his side.”

It is quite amazing how  the supreme being is invoked by one who inflicts torture on animals. Needless to say, there is a lesson to be learned beyond the aspect of animal cruelty — that bullfighting is also dangerous to the people who participate in this outdated savagery.

We urge you to sign our petition to end bullfighting. This petition states that “it is pure torture for the bulls forced into the ring to face mutilation and death.”


SIGN: Stop The Gruesome Bloodsport of Bullfighting in Spain