It takes a loving hand and family to foster kittens. But who says that hand has to be human? A 2-year-old French bulldog, Nono, has already helped socialize, play with, and raise five litters of kittens.

Nono is extra social by nature, which helps when you have to entertain a bunch of rowdy and demanding kittens. It also appears he has a strong bent toward altruism and animal welfare — just like his owner, ASPCA Kitten Nursery Manager Megan Noes. Aside from managing the nursery, she herself has given a temporary home to over 100 animals.

With a little training, Nono is a natural nurturer

Adopting Nono didn’t put a stop to her fostering efforts. If anything, it’s helped. Although Noes was nervous at how Nono would react at first, she introduced the first set of foster kittens to Nono very carefully.

“We knew he liked to chase squirrels, but didn’t know how he would respond to cats,” Noes said. “We always let the kittens come to him. It’s important they have that choice and plenty of options for escape. We monitor them carefully.”

At first, they kept Nono on a leash around the kittens and taught him special commands like “gentle” so he knew not to play rough with them. Now, he’s gotten used to the furry little creatures and even grooms them sometimes.

“He’s learned to leave the kittens alone and play with his own toys when he gets excited,” Noes said. “He also goes on plenty of walks so he stays busy.” 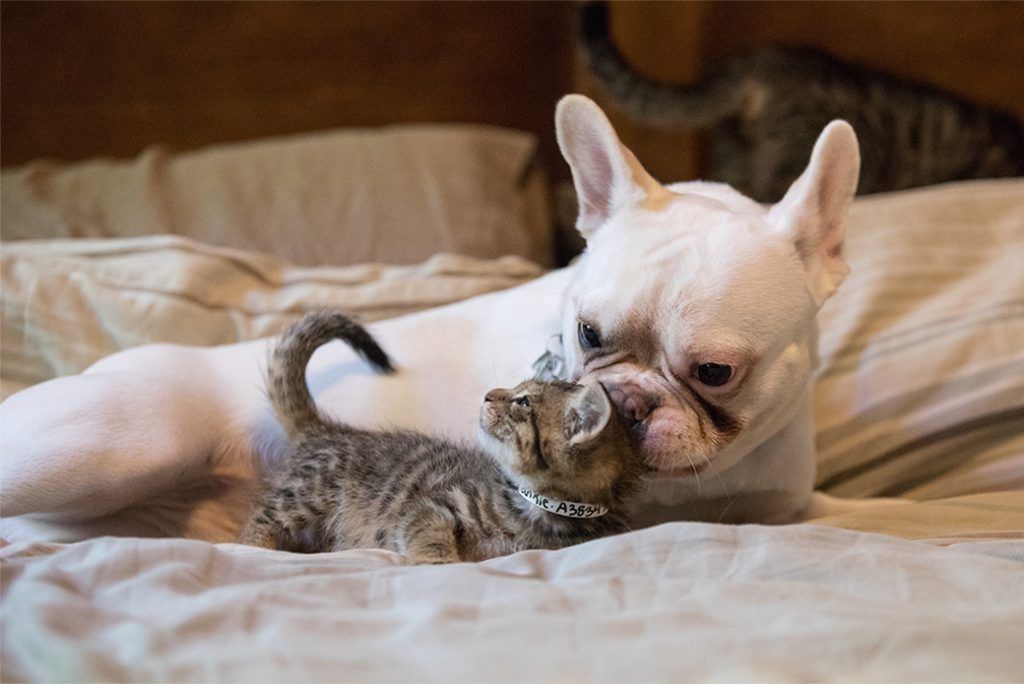 Picture of Nono courtesy of the ASPCA.

The ASPCA’s Kitten Nursery relies on foster homes like the one Noes and her dog provide. The nursery can hold 300 kittens, but they often go over that number. Fostering doesn’t just provide an extra space to take in more kittens, it also provides an important service. Noes and Nono help socialize the growing felines.

“If kittens meet a dog by the time they are four weeks old, they will show no fear by 12 weeks; they’ll be socialized to them,” said Noes.  “Our goal is to get as many kittens who are doing well into foster homes. That way they’re much better prepared to go into new homes when the time comes, and the nursery can focus on the ones who most need our attention.”

This would make it easier for families who have dogs to adopt kittens.

Although Nono has to say goodbye to his kitten friends just a month after taking them in, he is always ready to take on a new litter.

Nono shows how easy it is to be a foster parent

Nono isn’t the only dog helping foster cats. Zuca, a pit bull, and Safin also help take in and socialize kittens. These three kind dogs demonstrate true kindness and serve as an inspiration for the rest of us.

Between six to eight million cats and dogs enter shelters every year while 2.7 billion companion animals are euthanized. Fostering these abandoned animals gives them a glimpse of love and kindness and prepares them for adoption at a forever home.

Summer is kitten season (when cats most often give birth), which tends to overwhelm many shelters. If you want to help out, consider fostering a kitten from your local shelter or use ASPCA program Meow for Now to connect with a foster program. As Nono could tell you, being a foster parent is a lot easier than you think.