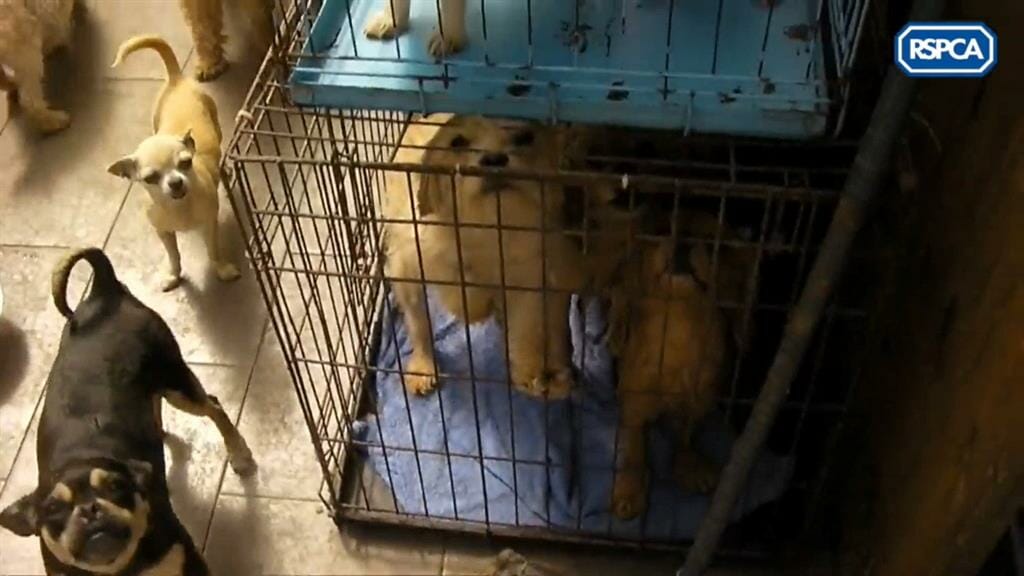 A judge has sentenced a UK dog breeder to 21 weeks in prison and ordered her to pay a £50,000 fine (US$62,400) after an animal rescue charity discovered she was keeping over 100 dogs in disgusting conditions in her home.

A shocking video filmed by the RSPCA revealed the horrendous situation in which Lynn Stoker was keeping the dogs – including cockerpoos, chihuahuas, bulldogs and shih-tzu crosses. Some of the dogs were in cramped cages piled on top of each other; others were living outside in the cold, in damp and filthy kennels without any bedding.

The neglected canines didn’t have enough clean water and were being fed unhealthy and unsuitable scraps of waste food. The dogs were taken into the care of the RSPCA, but some of them had undergone so much suffering that they had to be euthanized.

RSPCA Inspector Heidi Cleaver says that all the dogs had at least one health problem — including severe malnourishment, ear diseases and dental problems — and that when the team entered the house a multitude of dogs crowded around their rescuers’ feet.

“The house was chaotic and noisy and there was nowhere for any of the dogs to escape from each other,” Cleaver explains. “The dogs were fed on left-overs from an army base — for example bacon, sausages — which are full of saturated fat, high in salt and not conducive to a healthy and balanced diet.”

Stoker, from Byrness in Northumberland, was found guilty of 15 counts in total, including causing unnecessary suffering to a protected animal and failing to ensure an animal’s welfare needs were met. As well as the prison time and fine, Stoker was also prohibited from ever keeping animals again.

However, although it is certainly good news that Stoker won’t be able to harm any more animals in future, the sentence handed down was clearly too lenient, especially considering the suffering these dogs had to endure and the fact Stoker didn’t show ‘a shred of remorse or contrition.’