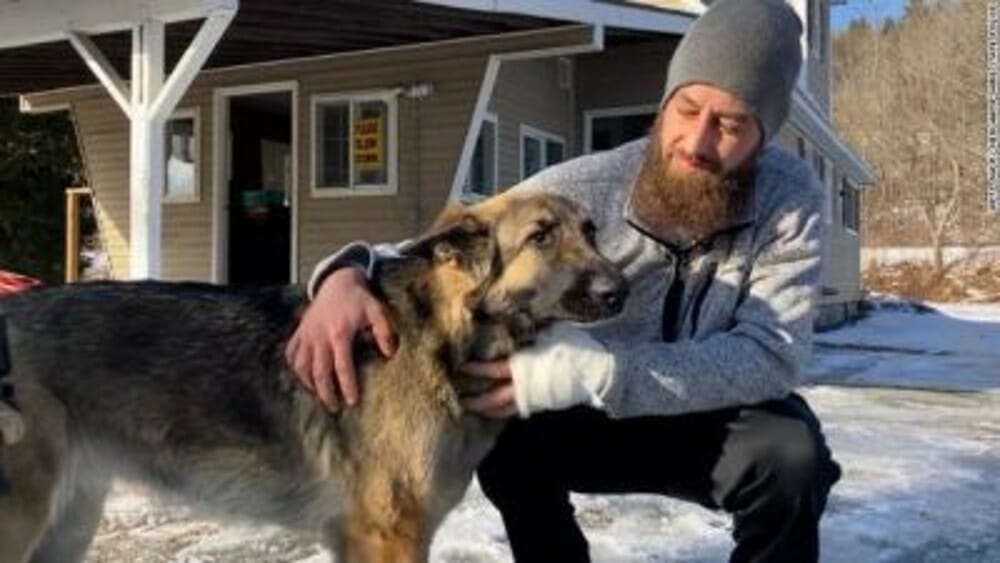 A German Shepherd spotted running along Interstate 89 near the New Hampshire/Vermont state line led local and state police to the scene of a totaled pickup truck and his guardian and another injured passenger — very likely saving their lives.

Officers initially feared that the dog, Tinsley, had somehow gotten onto the roadway and was confused.

“Our immediate concern is the road hazard for a vehicle accident or the dog getting struck or both,” said Lebanon Police Chief Phillip Roberts.

New Hampshire state troopers who responded approached the dog, Tinsley, to corral her, but she would not let anyone get within 8 or 10 feet, said Roberts.

Instead,  their efforts only served to have her run further up the northbound side of the interstate, across the border, and into Vermont. They followed the dog to the interstate’s junction with Interstate 91, where they noticed a recently damaged guardrail.

When they saw the guardrail, “it quickly became apparent” that Tinsley had actually been leading them to the scene of a crash, the police said in a Facebook post.

Just beyond the guardrail, police found a mangled pickup truck and two people, presumably thrown from the vehicle during the accident, on the ground — injured, unconscious, and in danger of hypothermia.

One of them, Cam Laundry, was Tinsley’s guardian.

Hartford EMTs credit the speed of their response to Tinsley’s ability to find help. Tinsley reportedly stayed close to her guardian as paramedics administered patient care at the scene.

Tinsley did not appear to be injured in the crash, police said.

Laundry also is on the way to recovery and grateful that the dog’s love for him likely saved his life.

“She’s my little guardian angel you know,” he told MyNBC5. “It’s a miracle that she had that kind of intelligence to do what she did.”