Planned Parenthood just celebrated its 100th year.  During that time, they have established themselves as a trusted healthcare provider, a go-to resource for information/answers and a constant and strong advocate for women.
Many celebrities have supported the organization’s profound efforts, and if he wasn’t on that list before, Adam Horovitz (better known as Ad-Rock from the Beastie Boys) can now be added.
Ad-Rock has teamed up with a cruelty-free shoe business to design a warm shoe with a big purpose. 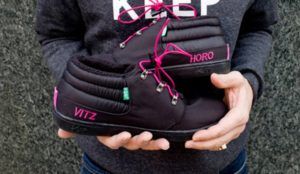 “Winter’s cold and I couldn’t find a warm sneaker to walk around in,” Horovitz said in a statement. “Given the outcome of our current election, it’s gonna get a lot colder before we can feel that summer sun again. So, I collaborated with my friend Una [Kim, founder of] Keep shoes not just because I wanted warm sneaks, but because I support small business. I support women run business. I support Asian-American run business. Net proceeds of this shoe will be donated to Planned Parenthood because I support a woman’s right to choose and feel that women should not be punished for making decisions about their own lives and bodies. If you have similar beliefs, you might wanna grab a pair. Or, if you simply support fresh styles, then you too can be part of what peeps in Keeps are doing.”
We think Adam said a lot, but we’d like to point out that choosing to create vegan shoes is also helping to save animals, the planet and feed the hungry. If you agree, or want to help with any of these issues you can pre-order the $97 Ramos Ad-Rock Shoe here. They are expected to ship in late February 2017.