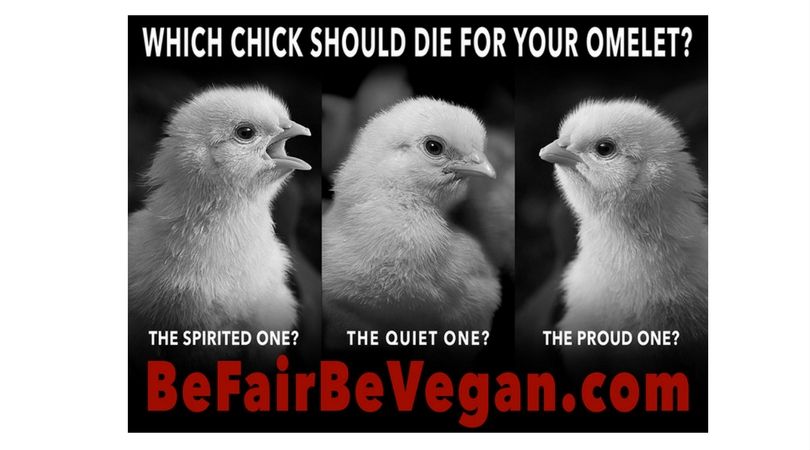 Billboard Image: Be Fair Be Vegan

Would you have a hankering for a hamburger after seeing cows close up, soulful eyes and all? Would you crave milk if you saw calves stolen from their mothers just after birth? Be Fair Be Vegan has assumed the job of teaching the public the hidden horrors endured by animals in agriculture and other industries, and is calling for an end to the violence.

Throughout the month of August, Be Fair Be Vegan will display 200 street posters and two billboards in Manhattan designed to convince the public that animals deserve to be treated humanely, and not exploited. Campaign organizers chose New York City because of the multitude and diversity of people who will be exposed to the ads.

The strategy seems to have proven effective, according to campaign creator Joanna Lucas, an artist, writer and animal activist.

“The overwhelming response to the Be Fair Be Vegan posters and billboards confirms that a profound, and long overdue, shift in consciousness is finally beginning to happen,” Lucas told Lady Freethinker. “Our species privilege gives us only one right: the right to help and protect our fellow animals, not to use them for our own gain. In understanding this, more and more people are also realizing that ending their demand for the products of animal misery is not a choice, but the most basic act of human decency.”

Indeed, consciousness of animal rights is on the rise — 16 million people in the United States are now vegan or vegetarian, a five-percent increase from 1% in 2009. This increase offers renewed hope that society can improve the lives of animals while helping to curb human starvation by feeding people the grains that animals on factory farms are currently consuming in massive quantities. The greenhouse gases produced by farm animals would also be reduced or eliminated, helping control global warming.

“We’re hoping that this campaign will be a significant turning point in the movement to end the atrocity of animal slavery, as such an intolerable industry cannot stand up to widespread public scrutiny and survive,” Be Fair Be Vegan spokesperson Angel Flinn told Lady Freethinker. “Making people aware of the abhorrent evil inherent in all forms of the animal trade is what will cause the tide to turn. We believe that the day is approaching when our fellow animals will finally be granted the rights they have always deserved: to be their own masters, and slaves to no one.”