A passenger was removed from their hiding place at Orlando’s Sanford International Airport this week — but they weren’t there to sneak onboard a plane.  It was a young male bobcat who had unwittingly hijacked a ride after being trapped behind the grill and inside the engine compartment of a white Lexus automobile.

While making their rounds in the employee parking lot, security guards at the airport heard strange growls coming from a car, and paused to check out the odd sound.  They determined that, in fact, an animal was trapped behind the grille of the parked Lexus.  Though it’s not exactly clear how the young cat got there — whether the vehicle’s owner had accidentally hit the small animal and sucked it into the transmission’s cooling lines, or if the cat had crawled into the engine compartment to keep warm during the cold spell — Florida Fish and Wildlife Commission (FWC) were contacted. 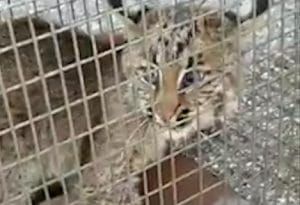 However, it was Isaac Rempe and Dave Kelly, a team from Affordable Wildlife Removal, who arrived on the scene to perform the unusual rescue.  And they got right to work.  After they identified where the cat was trapped and prepared the tools to do the job without harming the animal, with some coaxing and pushing the entire rescue took about nine minutes.  The trapping team don’t fault the driver, as it was dark when she came to work and it was likely she didn’t know she’d hit him.

AWR told LFT that they took the cat to a wildlife rehabber in Tampa with experience in rehabbing bobcats and other large, wild cats.  Their vet reported that this bobcat is very young, between six and eight-weeks old, and would probably still be with his mother if not for this misadventure.

Though he will make a full recovery, as you can see in this clip, both front paws, which have been wrapped, are badly broken; pins will be used to mend the breaks.  Because the breaks are so severe, and the rehab probably extensive, he will not be released back into the wild but will live and be pampered in captivity for the rest of his life while serving as an educational animal ambassador for the rescue.

Though bobcats are not a protected species in Florida, they are highly nocturnal and infrequently glimpsed in the wild.