Artist Spreads Message of World Peace, One Mural at a Time 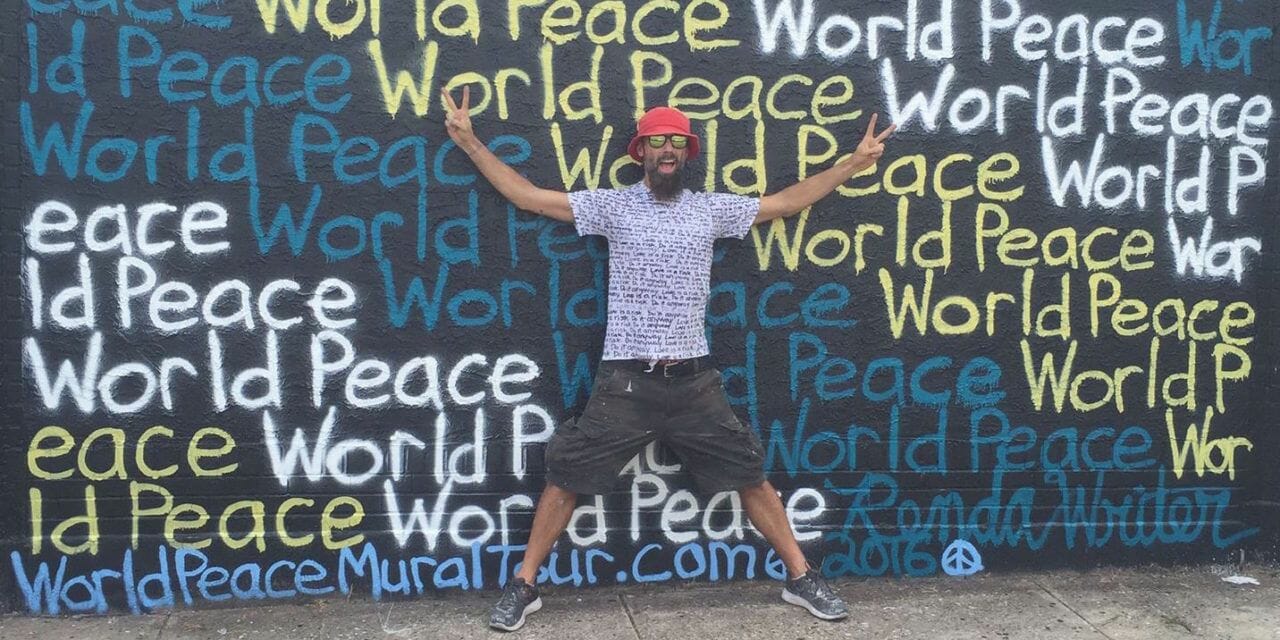 On January 21, international mural artist Renda Writer will create his 27th mural at the Apache Café in Atlanta, GA, as part of his World Peace Mural tour. The artist will spray paint the word ‘world peace’ over and over again until the exterior walls of the café are transformed into a one-of-a-kind handwritten mural.

The idea is to focus on the positives instead of the negatives, which are bound to be floating around on the first day of the new Republican administration.

“I guess my goal is really just to use the power of the written word, and the influence of public art to increase the energy around the idea of world peace, bring it back into the global conversation, remind people of it, as a concept, and as a real viable option for humanity,” said Writer in an interview with Lady Freethinker.

The goal of the tour was simple to start with – five murals in five U.S. cities — but it quickly grew to something more ambitious. This year, Writer intends to spend three to four weeks in California doing as many murals as he can, as well as three murals outside the U.S.

Growing up, Writer always had a deep appreciation for words and listened to a lot of conscious hip-hop. The song “World Peace” by his favorite artist, KRS-One, inspired him to embark on this tour.

Originally, his love for hip-hop got him into spoken word poetry, and Writer started writing, performing and recording poetry in 2001. Nine years later he found himself hanging out in Miami’s Wynwood Art District. Some of that energy rubbed off on him and he turned to visual arts.

“People took to it, and that motivated me to keep creating, and then once I started doing murals in 2014, everything just exploded,” said Writer.

Writer enjoys an overwhelmingly positive response to his message of peace, as well as his signature sub-genre of public art murals, “handwritten art.”

Other artists have created music videos in front of his murals, recorded songs related to world peace, and even performed world peace-themed concerts at venues with his murals.

Writer leaves you to ponder this question: “What are you doing for your own personal peace, and for the peace of the planet?  This is what I am doing.  I am not a politician, a millionaire, or anyone with major power, but am an artist, I am passionate about what I do, and I do believe in the power of words.  It is possible to write things into existence.”

Look out for Renda’s tour dates, and visit his Facebook Page to help him reach his goal of 5,000 likes.