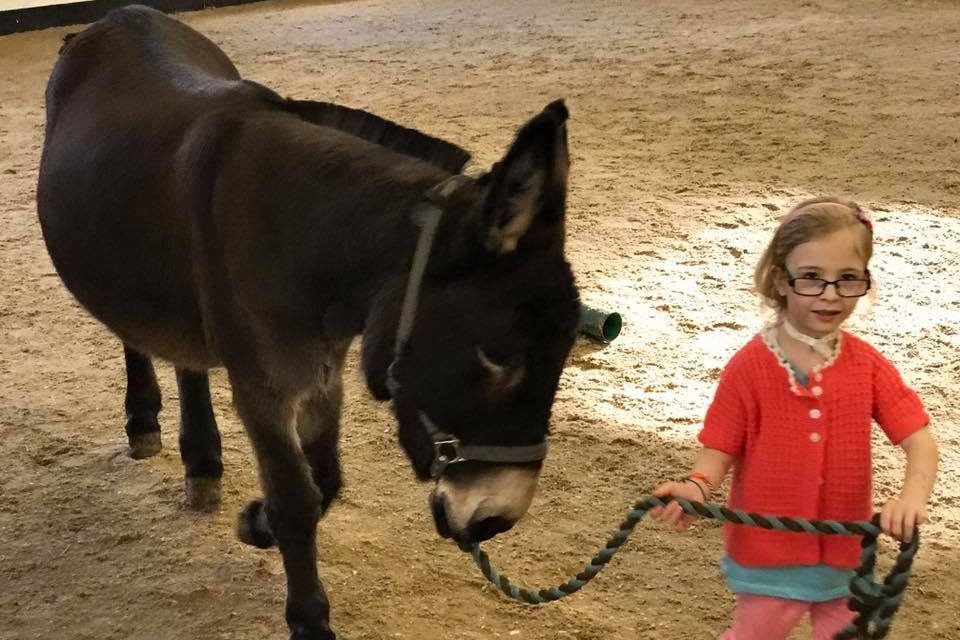 It was 2010 and Shocks, a donkey currently living at the Donkey Sanctuary’s Assisted Therapy Centre, was recused from a farm in Galway, Ireland. He was found with a rope tied so tightly around his neck that he suffered from open wounds and lacerations. Today he lives a free, happy life helping those with emotional, cognitive and physical challenges.

Around the same time Shocks was rescued, Tracy Austwick gave birth to twin girls, born prematurely at just 26 weeks old. One of the babies, Amber, was rushed into surgery for an emergency tracheostomy within minutes of her birth. Her parents were immensely grateful that the surgery saved her life, but she was mute and they were understandably distraught their daughter would never be able to speak.

“I didn’t feel happy with the idea of her going to nursery school, let alone primary school, if she wasn’t able to make her needs known and I was convinced that there had to be something else we could do for her,” said Tracy, 37.

A friend mentioned The Donkey Sanctuary to Tracy and her husband, Julian, and suggested perhaps one of the rescue animals might be able to help their daughter.

Amber had never met a rescue animal and this was Shocks’s first official day working as a therapy donkey, but the connection was immediate and they became fast friends. Shocks allowed Amber, who had also been diagnosed with cerebral palsy, to pet, groom and hug him freely, and riding him helped her develop muscles that allowed her to walk.

“It has to do with confidence and trust. They trusted each other, no words needed to be said, they just got on with it,” said Tracy.

Then one day during a visit with Shocks in late 2013, just as Amber was about to leave, she hugged the donkey and said, “I love you, Shocky.”

Since that day, Amber hasn’t stopped talking and her parents have been so touched by what Shocks did for their daughter that they wrote a book about it.

To help The Donkey Sanctuary fund their rescue therapy program so that donkeys like Shocks can continue assisting people, please make a donation.