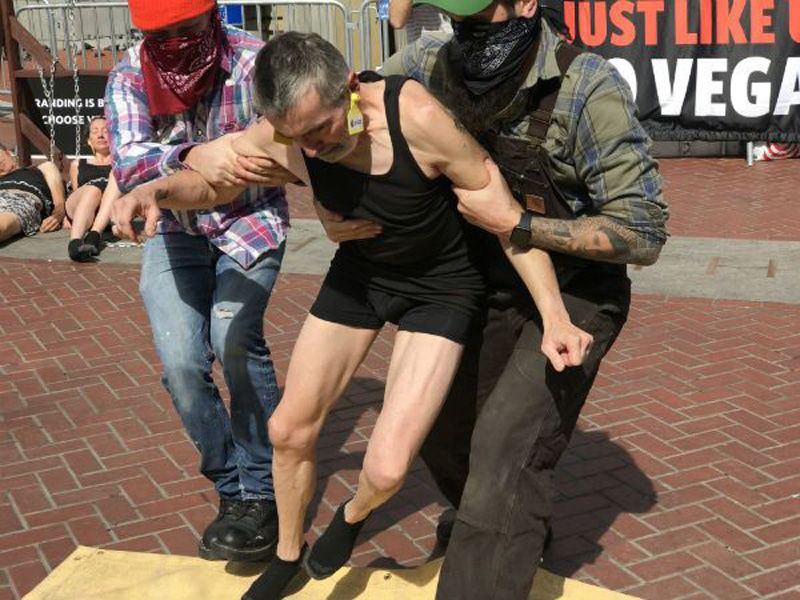 Every year since 1983, World Day for Farmed Animals has provided animal rights supporters the opportunity to memorialize and mourn the 150 billion animals abused and slaughtered for food annually. October 2 is the official day of the observance.

This year, in a protest organized by In Defense of Animals, four San Francisco residents branded themselves with hot irons to raise awareness of the painful mutilations that factory farm animals are routinely subjected to and their inevitable subsequent slaughter.

Demonstrators acting as ‘farm workers’ dragged four animal rights activists across UN Plaza. Then, a searing hot iron heated to 3,000 degrees Fahrenheit was plunged into the activists’ arms and shoulders as they grimaced in pain.

In a statement, In Defense of Animals President Marilyn Kroplick, M.D. highlighted the importance of the peaceful protest: “We brought the hidden suffering of billions of animals to the streets of San Francisco on Mahatma Gandhi’s birthday with his message, ‘be the change you want to see in the world’. You can make a difference by choosing vegan options and enjoy benefits to your health, animals, and the environment.”

The first human-branding protest for animal rights occurred in Israel on World Day for Farmed Animals in 2012. It sparked an international movement called 269Life and the practice quickly caught on in other parts of the world, including Italy, Argentina, Australia, and the United States. The movement was named in honor of Calf 269, who narrowly avoided death when he was rescued from an Israeli dairy farm.

To date, thousands of animal activists around the globe have demonstrated their solidarity with the food industry’s animal victims by having the number 269 tattooed or branded into their flesh. The human-branding protest in San Francisco yesterday was the first of its kind to take place in the state of California.